‘Davos man is dead’ – Ted Malloch, tipped to be Trump’s pick for EU ambassad or 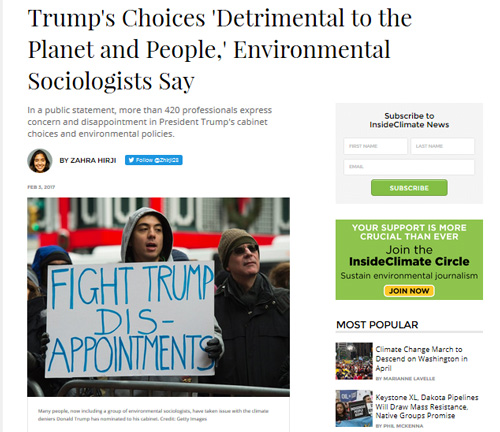 In a public statement, more than 420 professionals express concern and disappointment in President Trump’s cabinet choices and environmental policies.

More than 420 sociologists have issued a public statement condemning President Donald Trump‘s denial of man-made climate change and the anti-climate views of some of his cabinet nominees.

The signatories are all environmental sociologists, a discipline that studies the relationships between humans and the natural world. For many, climate change is a key focus of their work.

“As professional environmental sociologists who have dedicated our careers to the study of the interaction of social systems with ecosystems, we condemn President Donald Trump’s refusal to accept the reality of anthropogenic climate change, and his nomination of a series of climate-denying anti-environmentalists to key cabinet positions,” the statement said.

This statement, released Friday afternoon, follows similar public declarations of support for continued American leadership on climate action by college and university leaders, the business and investor community, and others.

“There’s a rich body of sociological research, as well as from other social science disciplines, that show that the human consequences of climate change are incredibly significant,” as are the human causes of climate change, said Andrew Jorgenson, an environmental sociologist at Boston College and one of the organizers of the statement.