Brought to you by the SDG Academy in partnership with the Indian Institute for Human Settlements. 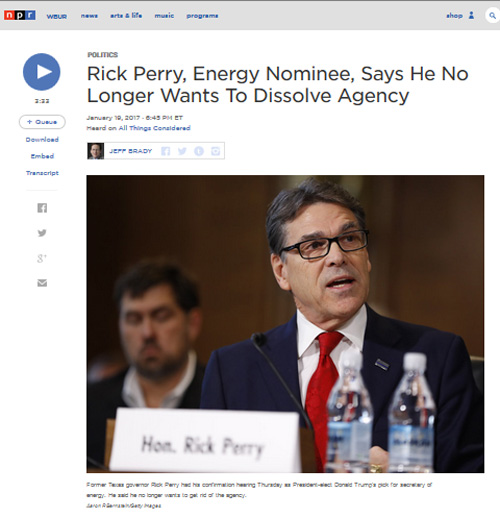 Even Rick Perry changes his mind.

At his confirmation hearing as President-elect Donald Trump’s pick for Secretary of Energy, the former Texas governor said he no longer wants to do away with the department he once said should be eliminated.

Or, at least, that was something he tried to say.

In 2011, during one of his presidential campaign debates, Perry could only remember the names of two of the three agencies he wanted get rid of. The third agency is the very one he was chosen by Trump to head.

Perry said at the hearing that he regrets ever suggesting that idea.

“My past statements made over five years ago about abolishing the Department of Energy do not reflect my current thinking,” Perry said.

In U.S. Ethics Chief, An Unlikely Gadfly To Trump : NPR 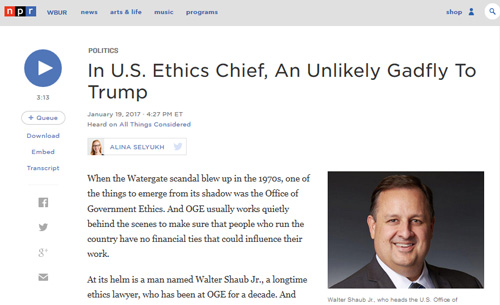 When the Watergate scandal blew up in the 1970s, one of the things to emerge from its shadow was the Office of Government Ethics. And OGE usually works quietly behind the scenes to make sure that people who run the country have no financial ties that could influence their work.

At its helm is a man named Walter Shaub Jr., a longtime ethics lawyer, who has been at OGE for a decade. And when you ask people about him, Shaub is described as careful, even-keeled, even kind of boring — a government lawyer.

That made it all the more surprising that he was the man who orchestrated a bizarre, Trump-style tweetstorm from OGE, saying things like “Bravo!” and “Brilliant! Divestiture is good for you, very good for America!” — despite Trump’s never promising any such thing.

“I was trying to use the vernacular of the president-elect’s favorite social media platform to encourage him to divest,” Shaub explained last week, in another unexpected situation — a 13-minute speech, added at the last minute to an event at the Brookings Institution.

“I wish circumstances were different and I didn’t feel the need to make public remarks today,” he said. “You don’t hear about ethics when things are going well.”

In a steady monotone, Shaub denounced Trump’s plan — to keep ownership of his business empire, but shift management to his sons — as inadequate and meaningless: “The plan the president-elect has announced doesn’t meet the standards that the best of his nominees are meeting and that every president in the past four decades has met.”

http://democracynow.org – On Tuesday, education secretary nominee Betsy DeVos faced intense questioning by Democratic senators during her confirmation hearing. DeVos is a longtime backer of charter schools and vouchers for private and religious schools. She and her husband have also invested in a student debt collection agency that does business with the Education Department. On Tuesday, DeVos was repeatedly questioned over her role in her family’s foundations, which have poured millions of dollars into funding private Christian schools and anti-LGBT organizations, including the groups Focus on the Family and the Family Research Council, which the Southern Poverty Law Center has listed as a hate group. During her testimony, DeVos claimed she had nothing to do with the family’s Prince Foundation, even claiming that multiple federal tax filings listing her as the foundation’s vice president were incorrect.

http://democracynow.org – Watch our extended interview with Aaron Glantz, a senior reporter at Reveal from The Center for Investigative Reporting. He covered the siege of Fallujah, Iraq, as an unembedded journalist, and his latest investigation examines whether President-elect Donald Trump’s pick for defense secretary committed war crimes there while leading U.S. troops in 2004.

Visit http://democracynow.org to watch the full independent, global news hour, read the transcript, search our archive and to make a donation to support us.

Michael Moore to 25,000 NYC Protesters: “There’s More of Us Than There are of Them!”

https://democracynow.org – Democracy Now! broadcast our daily show live from WHUT on the campus of the historically black university, Howard University in Washington, D.C., less than four hours before Donald Trump became the nation’s 45th president. Trump lost the popular vote to Hillary Clinton by almost 3 million votes, but he managed to win the Electoral College. He takes office as the least popular incoming president in at least a generation. We get an update from protests in Washington, D.C., and hear the speech Academy Award-winning filmmaker Michael Moore gave Thursday night, when nearly 25,000 people gathered in New York City to protest outside Trump International Hotel and Tower near Central Park. We are also joined live by Naomi Klein, journalist and best-selling author, whose most recent book is “This Changes Everything: Capitalism vs. the Climate,” and Lee Fang, reporter with The Intercept who covers the intersection of money and politics.