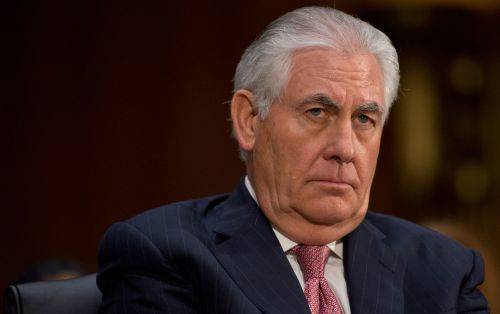 The former ExxonMobil CEO is too conflicted, too ill-prepared, and too disengaged to be seriously considered for the position of secretary of state.

Rex Tillerson’s witless, contradictory, and obfuscatory testimony before the Senate Foreign Relations Committee confirmed fears that the ExxonMobil CEO is too conflicted, too ill-prepared, and too disengaged from accepted understandings with regard to diplomacy, sustainable development, and human rights to be seriously considered for the position of secretary of state.

But the most unsettling exchange took place after an initial round of questioning by New Jersey Senator Robert Menendez. The veteran member of the Foreign Relations Committee asked what should have been a simple concluding question.

Senator Menendez: “For all of these answers you’ve given me, does the president-elect agree with you?”

Thom Connects the Dots Between Climate Change and the Arab Spring 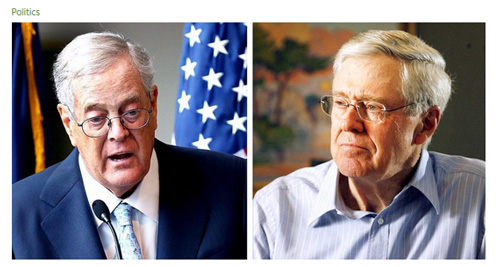 The Trump White House is going to be very, very Koch-y.

During the 2016 presidential campaign, billionaire industrialists and Republican mega-donors Charles and David Koch made headlines by refusing to endorse a candidate. But ads in U.S. Senate races paid for by Koch-linked independent political groups hurt the image of Donald Trump’s foe, Hillary Clinton, whom they criticized while associating Democratic Senate candidates with her. And the massive ground game of the Kochs’ well-known political group, Americans for Prosperity, helped turn out thousands of Trump voters in battleground states.

From transition team staffers to his cabinet, Trump has brought numerous Koch lieutenants and allies into his inner circle. His taunting of Marco Rubio for being a “puppet” of the Koch brothers is long gone. It’s very likely that Trump is eager to work with Charles and David Koch, who represent exactly what Trump values most—wealth and power—which is also reflected in his potential Cabinet of billionaire executives. And though the Kochs may object to Trump’s Islamophobia or other select viewpoints, they stand to add to their combined $88 billion through Trump’s planned environmental deregulation, privatization, corporate tax cuts and other policies favoring the wealthy to be carried out by his U.S. Environmental Protection Agency (EPA) pick, who recently sued that agency; his secretary of state choice, the CEO of Exxon; his labor pick, a fast-food CEO who doesn’t believe in the minimum wage; and others. 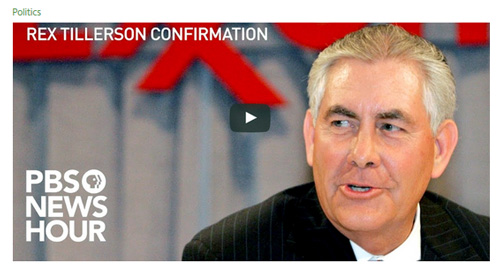 Secretary of state nominee and former Exxon CEO Rex Tillerson testified before the Senate Foreign Relations Committee on Jan. 11. Tillerson is already under fire for making the seemingly false claim that Exxon has not lobbied against sanctions on Russia and other nations that would affect Exxon’s business dealings, but here are five other climate change-related takeaways that reporters should keep in mind in their coverage of the hearing and Tillerson nomination going forward.

Exxon Ordered to Fork Over 40 Years of Climate Research

ExxonMobil was dealt a major blow on Wednesday after a Massachusetts judge ordered the company to hand in more than 40 years of climate research.

Northeast warming more rapidly than most of US 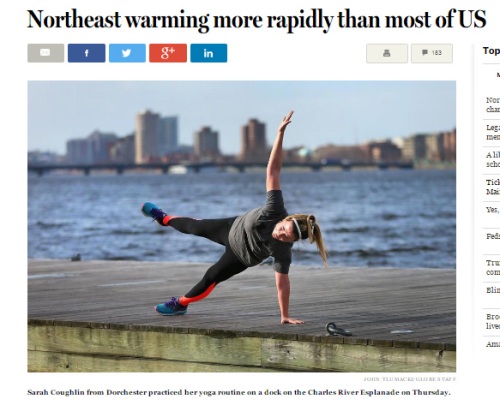 New England is likely to experience significantly greater warming over the next decade, and beyond, than the rest of the planet, according to new findings by climate scientists at the University of Massachusetts Amherst.

The region’s temperatures are projected to rise by an average of 3.6 degrees Fahrenheit above pre-industrial levels by 2025, according to the study, published this week in PLOS One, a journal published by the Public Library of Science.

The scientists found that the Northeast is warming more rapidly than any other part of the country except Alaska — and that the 3.6 degree Fahrenheit rise in the region is likely to come two decades before the rest of the world gets to that point.

Last month Climate Ready Boston released a new report—a year in the making—that greatly improves knowledge regarding the expected impacts of climate change and the people and places in the city of Boston who will be most vulnerable. Marking the end of the first phase of Climate Ready Boston, an initiative led by the City of Boston in partnership with the Green Ribbon Commission, and supported by Barr, this report provides both the technical foundation and an implementation framework for long-term climate preparedness.

Among the report’s key findings are: