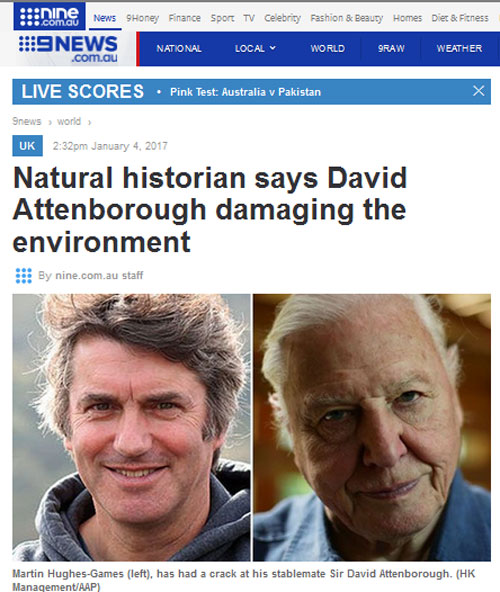 A British natural history broadcaster has taken aim at the most sacred cow in his field, Sir David Attenborough, saying beloved series like Planet Earth do more harm to the environment than good.

In a Guardian op-ed, BBC presenter Martin Hughes-Games wrote that while Attenborough’s latest nature-porn effort Planet Earth II was “brilliantly executed”, it is a “disaster for the world’s wildlife”.

“These programmes are pure entertainment…” Hughes-Games opines. “(But) ultimately a significant contributor to the planet-wide extinction of wildlife we’re presiding over.”

The Springwatch host then goes on to cite figures that show a 58 percent decline in vertebrate population the world over between 1970 and 2012, saying that Attenborough’s celebrated output, which began in 1979, has helped create a “beguiling fantasy world”.

The Heat: The impact of globalization

The lives of people all across the globe are increasingly connected, through trade, and advanced technology. Many of the barriers that have divided the world have disappeared. Thanks to globalization, more than 3 billion people, formerly left out of business and trade, are now able to compete and achieve a better life. Despite advances, not everyone has enjoyed the benefits of global cooperation. CGTN’s Jessica Stone reports on the impact of globalization.

The lives of people all across the globe are increasingly connected, through trade, and advanced technology. To understand the impact and the extent that globalization has played in the modern world, from politics to business: Ian Goldin, former vice president of the World Bank. He is currently Oxford University Professor of Globalization and Development, and author of the upcoming book, “Age of Discovery: Navigating the Risks and Rewards of Our New Renaissance.”

Published on Jan 4, 2017
Earlier this week, Republican lawmakers attempted to shut down an independent ethics body that was put in place to put an end to corruption in Washington, D.C. But after countless phone calls and tremendous public backlash, the Republicans withdrew the effort, proving that activism truly does work. Ring of Fire’s Farron Cousins discusses this.

With thousands of water systems in the United States testing positive for higher-than-allowable levels of lead and other contaminants, clean water has become a luxury in the United States. Even worse, this story doesn’t appear to be bothering too many people and the corporate media is completely ignoring it. Ring of Fire’s Farron Cousins discusses this.

Trump election: The people around the president-elect – BBC News

s US President-elect Donald Trump makes his transition to the White House, we look at the family members and associates who are part of the team and could have key roles in decision-making during his presidency.

The Indiana governor, 57, is charged with leading the team deciding the key appointments in the new administration.

Rex Tillerson, nominated by US President-elect Donald Trump to be secretary of state, runs the world’s most valuable, publicly traded oil company.

The 64-year-old, Texas-born head of Exxon Mobil has worked for the company in the US, Yemen and Russia, and is known for his close ties with Russian President Vladimir Putin.

But Mr Tillerson’s links to the Kremlin, which awarded him the Order of Friendship in 2013, and his lack of experience have drawn criticism from both Democrats and Republicans, setting up a potential battle in his confirmation hearings in the Senate early next year.

The Texas oil chief is likely to come under intense scrutiny for the potential benefits Exxon might receive in US foreign policy he would preside over at the State Department.