On the Road to Paris – Dangerous Intersection: Climate Change and National Security

Learn all about Humus, the layer of soil essential for healthy food production which is being gradually depleted by unsustainable farming practices. Graeme Sait a lifelong human and soil health educator explains how 467 billion tonnes of carbon has been released from the soil into the atmosphere, and that we urgently need to return that carbon to the soil, and start replenishing the humus in order to reverse the impact. 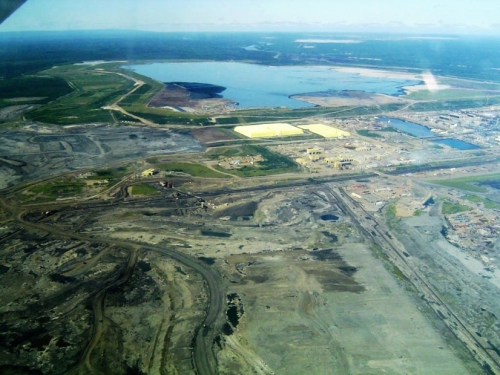 At a speech given to the Calgary Chamber of Commerce, Canada’s Prime Minister Justin Trudeau said he intends to work with President-elect Donald Trump to approve the northern leg of TransCanada‘s Keystone XL pipeline.

The speech comes as Trump revealed in a recent interview with Fox News that one of the first things he intends to do in office is grant permits for both Keystone XL and the perhaps equally controversial Dakota Access pipeline. Because Keystone XL North crosses the U.S.-Canada border, current processes require it to obtain a presidential permit from the U.S. Department of State, which the Obama administration has denied.

The next State Department, however, could be led by the recently retired CEO of ExxonMobil, Rex Tillerson, who was just nominated to be U.S. Secretary of State and

soon will face a Senate hearing and vote. Potentially complicating this situation is the fact that Exxon holds substantial interest in both tar sands projects and companies, which stand to benefit from the Keystone XL pipeline bringing this carbon-intensive crude oil across the border.

According to Bloomberg, Trump’s team has shown interest in getting rid of the Executive Order which created the presidential permit process altogether, which President Barack Obama and Secretary of State John Kerry used in November 2015 to axe the pipeline.

On the campaign trail and during his post-election “Victory Tour,” Trump has pledged to rescind all of Obama’s Executive Orders. Unsurprisingly, Tillerson has stated his support for Keystone XL, as well.

As reported in a recent investigation by InsideClimate News, nearly a third of Exxon’s global reserves is situated in Alberta’s tar sands, an oil patch which covers about 55,000 square miles, or roughly the size of New York state. Alberta’s tar sands represent the third largest oil reserves on the planet.

Robert Reich: Like a Tyrant, Trump Is Deploying 7 Techniques to Control the Media | Alternet 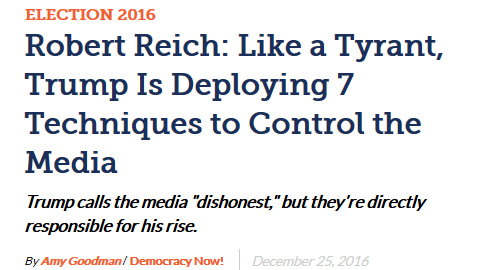 http://www.alternet.org/election-2016/robert-reich-tyrant-trump-deploying-7-techniques-control-media
By Amy Goodman / Democracy Now!
December 25, 2016
December 20th marks the 146th day since Donald Trump last held a news conference. As the Electoral College backs Trump, we speak to former Labor Secretary Robert Reich, now a professor at the University of California, Berkeley. “Democracy depends on a free and independent press, which is why all tyrants try to squelch it,” Reich recently wrote. “They use seven techniques that, worryingly, President-elect Donald Trump already employs.” We speak to Reich, who discusses how Trump uses seven techniques to control the media.

Trump Is The Result Of Years Of GOP Anti-Intellectualism

The Republicans have spent most of this century railing against so-called liberal elitism and intellectualism, demonizing intelligence. Donald Trump’s election is the end result of the Republican Party’s assault on intelligence. The Ring of Fire’s Farron Cousins discusses this.

The New York Times recently speculated about who could be the Democrats’ nominee for 2020. How about we focus on the real issues right now and leave the 2020 Presidential race for 2020? The Ring of Fire’s Farron Cousins discusses this. 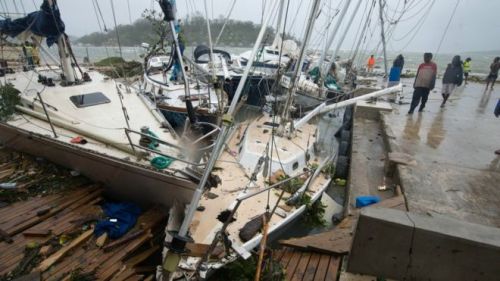 http://www.bbc.com/news/blogs-news-from-elsewhere-38415796
By News from Elsewhere… …as found by BBC Monitoring

A new web tool is allowing Pacific Islanders on Vanuatu to see how rising sea levels could affect their homes and businesses over the coming years.

Coastal Risk uses mapping technology to show how predicted levels of flooding as a result of climate change could inundate the islands, Radio New Zealand reports. The website is the work of an Australian research organisation in cooperation with geographic information company NGIS, and allows local people as well as the authorities to make informed decisions about their future and that of subsequent generations.

Website users are able to see how their locality might look depending on different scenarios, the most severe of which anticipates a sea level rise of 74cm (29 inches) by the year 2100.

The Pasifik news portal says Vanuatu residents are “already on the front line of climate change”, and the website will allow the authorities to decide where to direct resources.

Speaking to Pasifik, Jesse Benjamin, Vanuatu’s Director-General of Climate Change, said the website “will build awareness regarding the challenges that Vanuatu faces with climate change, and will ultimately lead to more effective decision making”.

Are We Right to Care So Much About Economic Growth as We Clearly Do? (2006)

This talk was given at a local TEDx event, produced independently of the TED Conferences. Landscape Design

Thomas Woltz is the principal and owner of Nelson Byrd Woltz Landscape Architects (NBW) with offices in New York City, Charlottesville VA, and San Francisco CA. During the past 19 years of practice, Woltz and his staff have forged a body of work that integrates the beauty and function of built form and craftsmanship with an understanding of complex biological systems and restoration ecology yielding hundreds of acres of reconstructed wetlands, reforested land, native meadows, and flourishing wildlife habitat. Currently NBW is entrusted with the design of 8 major public parks across the US, Canada and New Zealand. The firm’s work has been recognized with over 80 national and international awards and published widely.
In 2011, Thomas Woltz was invested into the American Society of Landscape Architects Council of Fellows, among the highest honors achieved in the profession, and in 2013, named Design Innovator of the Year by the Wall Street Journal Magazine.