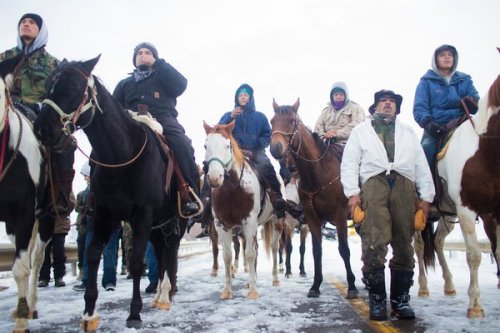 Protesters facing off with the police on Friday outside the Oceti Sakowin camp in North Dakota. The authorities have ordered the protesters to evacuate the camp by Monday.
Cassi Alexandra for The New York Times

CANNON BALL, N.D. — Lee Plenty Wolf knows the government wants him to clear out of the snowbound tepee where he stokes the fire, sings traditional Oglala songs and sleeps alongside a pair of women from France and California who came to protest an oil pipeline in the stinging cold. But he and thousands of other protesters are vowing to make what may be their last stand at Standing Rock.

The orders to evacuate the sprawling protest camp on this frozen prairie just north of the Standing Rock Sioux Reservation came down last week from the U.S. Army Corps of Engineers and the North Dakota governor’s office. After four months of prayer marches and clashes with law enforcement officials who responded with tear gas and water cannons, the protesters now have until Monday to leave.

The government said it would not forcibly remove anyone, but could cite people for trespassing or other offenses.

At the camp, defiance is rising like smoke from the stovepipe of Mr. Plenty Wolf’s tepee. People are here to stay. They are building yurts and hammering together plywood for bunkhouses and lodges. The communal kitchen stops serving dinner at 9:30 p.m., and reopens a half-hour later as a sleeping space.

“I ain’t going nowhere,” Mr. Plenty Wolf said one night as he cradled a buffalo-hide drum and reflected on grievances that run deeper than groundwater among Native Americans here. “We’re getting tired of being pushed for 500 years. They’ve been taking, taking, taking, and enough’s enough.”

Donald Trump has expressed his support for the completion of the $3.8 billion Dakota Access pipeline, which has faced months of resistance from the Standing Rock Sioux, representatives from more than 200 indigenous nations from across the Americas and thousands of non-Native allies. In a communications briefing, Trump’s transition team said his support for the pipeline “has nothing to do with his personal investments.” As of 2015, Trump had between $500,000 and $1 million invested in the pipeline company, Energy Transfer Partners, although Trump spokesperson Hope Hicks recently claimed Trump has sold off his shares in the company. This comes as North Dakota Governor Jack Dalrymple continues to back away from attempts to force water protectors to leave the main resistance camp, now saying authorities will not stop and fine people carrying supplies to the site. The governor says his recent executive order declaring the land an evacuation area sought only to warn people about the cold. In response, the Standing Rock Sioux said, “The Governor of North Dakota and Sheriff of Morton County are relative newcomers [here]. It is understandable they would be concerned about severe winter weather.” The first of a group of as many as 2,000 veterans have begun to arrive at Standing Rock in North Dakota, where they say they’ll serve to form a “human shield” around the water protectors to protect them from the increasingly violent police crackdown.

Meanwhile, protesters gathered in dozens of cities across the world Thursday in opposition to the Dakota Access pipeline, including in Tokyo, London, Vancouver, Calgary and cities across the U.S. In Minneapolis, six protesters locked themselves to each other inside a Wells Fargo office building, blocking the elevators for hours. They left only after receiving a letter saying Wells Fargo would meet with tribal elders before January 1 to hear their concerns about the bank’s investments in the pipeline.

In Canada, members of the Mohawk Nation have begun blockading freight trains carrying oil by rail from crossing their territory, which lies along the St. Lawrence River near Montreal. They say the blockade is in solidarity with Standing Rock.

Meanwhile, the Chippewas of the Thames First Nation have sued the Canadian government in Canada’s Supreme Court in order to challenge the permitting process for Enbridge’s Line 9 tar sands pipeline, saying their treaty rights to consultation were not met before the pipeline was approved. If the Supreme Court rules in favor of the Chippewas, it could set a precedent requiring formal nation-to-nation consultations between the Canadian government and First Nations for all future energy projects that would affect Native land. 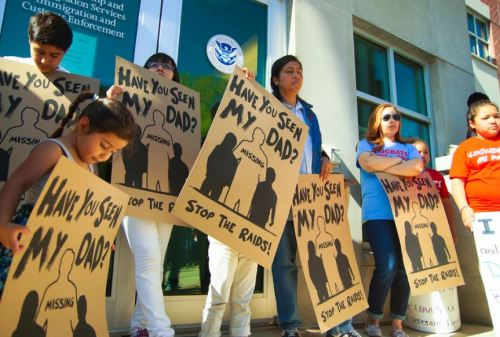 A protest outside Immigration and Customs Enforcement in Wisconsin in 2014. Joe Brusky
12.1.16
Karina Moreno

Karina Moreno is an assistant professor in the School of Business, Public Administration and Information Sciences at Long Island Unviersity, Brooklyn campus.

Deportation has become a billion-dollar industry. Between the second quarter of 2014 and 2015, Corrections Corporations of America’s (CCA) earnings leaped by $49 million. A single CCA facility in Dilley, Texas generated $100 million in the first half of 2015 alone.

CCA can thank desperate asylum seekers from Central America for their success; the border surge motivated the Obama administration to award it a billion-dollar deal to build a family detention center for women and infants.

This is all made possible because Congress mandates that immigration enforcement fill a daily quota of beds. CCA and the GEO Group have become the two largest private contractors. The profit motive directly compromises the judicial system, as these companies are incentivized to detain as many people for as long as possible. As a result, the private deportation machine gets rich from impoverished immigrants by violating their basic rights.

In August, the Department of Justice (DOJ) released a memo calling for an end to government use of private prisons. It said what public advocates and researchers have been saying for decades: that private prisons do not produce better outcomes than publicly operated ones. Many see this memo as a win, and it certainly is: everything we do to remove capitalist logic from our criminal justice system will improve it.

The memo illustrates how the carceral marketplace has shifted from the “war on drugs” to the “war on terror,” but it doesn’t go far enough. It does not cover the Department of Homeland Security (DHS), which has authority over immigrant detention centers. 62 percent of detained migrants are in privately run facilities. Nor does it cover state and local prisons. In the United States, 2.3 million are incarcerated. The DOJ memo moves 22,000 — just 1 percent — from private to public prisons.

“All Americans” apparently doesn’t include the tribes trying to protect their water.

President-elect Donald Trump’s energy and environmental priorities can be summed up as staunchly pro-fossil fuels. He doubled down on these positions Thursday, explicitly backing the Dakota Access pipeline, a $3.6-billion project that he has personal financial ties to. The controversial project has been the target of protests for months in North Dakota, where Native American tribes have been at the forefront of the effort to stop the pipeline’s construction under the Missouri River.

“Mr. Trump expressed his support for the Dakota Access pipeline, which has met or exceeded all environmental standards set forth by four states and the Army Corps of Engineers,” North Dakota Sen. John Hoeven (R) said in a statement Thursday, after a briefing with the president-elect’s team.

“Also, it is important to know that the new administration will work to help us grow and diversify our energy economy and build the energy infrastructure necessary to move it from where it is produced to where it is needed. The result will be more jobs, a more vibrant economy and affordable energy for the American people,” he said.

Hoeven has previously called for the protesters to stand down.

While Trump’s backing of the project, which his team said “has nothing to do with his personal investments and everything to do with promoting policies that benefit all Americans,” was not surprising, it still angered environmentalists and pipeline opponents.

Rochester — On April 1, 1960, the newly established National Aeronautics and Space Administration heaved a 270-pound box of electronics into Earth orbit. In those days, getting anything into space was a major achievement. But the real significance of that early satellite, Tiros-1, was not its survival, but its mission: Its sensors were not pointed outward toward deep space, but downward, at the Earth.

Tiros-1 was the first world’s first weather satellite. After its launch, Americans would never again be caught without warning as storms approached.

This small piece of history says a lot about the call by Bob Walker, an adviser to President-elect Donald J. Trump who worked with his campaign on space policy, to defund NASA’s earth science efforts, moving those functions to other agencies and letting it focus on deep-space research. “Earth-centric science is better placed at other agencies where it is their prime mission,” he told The Guardian.

NASA critics have long wanted to shut the agency out of research related to climate change. The problem is, not only is earth science a long-running part of NASA’s “prime mission,” but it is uniquely positioned to do it. Without NASA, climate research worldwide would be hobbled.

The Surui people in the Amazon rainforest are using Android phones with Open Data Kit to monitor carbon stocks in their forest to obtain credits from the carbon marketplace. Google Earth Engine will help monitor deforestation.