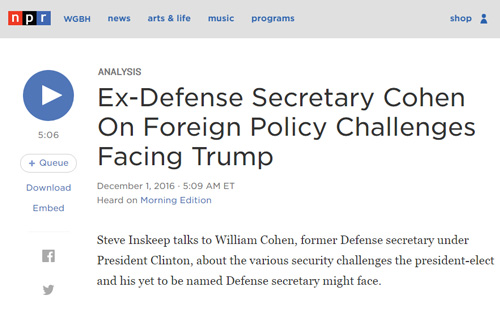 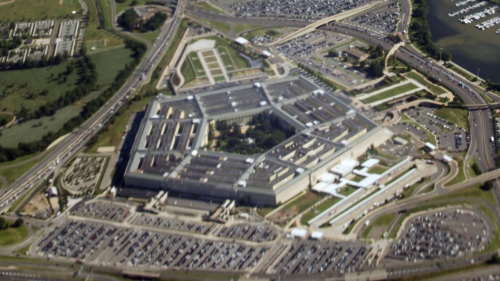 An Army review concludes that commanders did nothing wrong when they kicked out more than 22,000 soldiers for misconduct after they came back from Iraq or Afghanistan – even though all of those troops had been diagnosed with mental health problems or brain injuries.

The Army’s report, ordered by Secretary Eric Fanning, seeks to reassure members of Congress that it’s treating wounded soldiers fairly. But senators and military specialists say the report troubles them.

The Army’s report is “unbelievable,” says psychiatrist Judith Broder. “It’s just bizarre.” Broder was awarded the Presidential Citizens Medal by President Obama for organizing the Soldiers Project, a network of hundreds of psychotherapists and others who help troops and their families.

Exxon Mobil Vs. The Rockefellers

Exxon Mobil’s climate policy is under attack from its founding family, the Rockefellers. They’re with us. So is Exxon.
December 01, 2016

John D. Rockefeller founded the company that became Exxon Mobil, the world’s largest oil company. Now the heirs to John D are in a mighty tangle with Exxon Mobil. They accuse it of knowing and hiding the fact that fossil fuels were deeply damaging the planet. And of deliberately muddying the debate over that damage. Now Exxon Mobil says the Rockefeller critics are leading a conspiracy against it. The stakes here – the biggest. This hour On Point, the Rockefeller Fund president and Exxon Mobil, head to head. — Tom Ashbrook

New York Review Of Books: The Rockefeller Family Fund vs. Exxon — “It seemed to us, however, that for business reasons, a company as sophisticated and successful as Exxon would have needed to know the difference between its own propaganda and scientific reality. If it turned out that Exxon and other oil companies had recognized the validity of climate science even while they were funding the climate denial movement, that would, we thought, help the public understand how artificially manufactured and disingenuous the “debate” over climate change has always been. In turn, we hoped this understanding would build support for strong policies addressing the crisis of global warming.”

Los Angeles Times: What Exxon knew about the Earth’s melting Arctic — “Back in 1990, as the debate over climate change was heating up, a dissident shareholder petitioned the board of Exxon, one of the world’s largest oil companies, imploring it to develop a plan to reduce carbon dioxide emissions from its production plants and facilities. The board’s response: Exxon had studied the science of global warming and concluded it was too murky to warrant action.”

Bloomberg: Exxon Adds New York to Suit in Bid to Stop Climate Change Probe — “Massachusetts, New York and other states are investigating whether Exxon Mobil violated securities laws and consumer-protection rules by withholding information allegedly obtained as early as the 1970s that man-made emissions were changing the climate.”

Resolution Aims To Keep Trump’s Businesses From Being A Conflict : NPR

Russian Company Rustles Up Cowboys To Help Beef Up Demand For Steaks : NPR 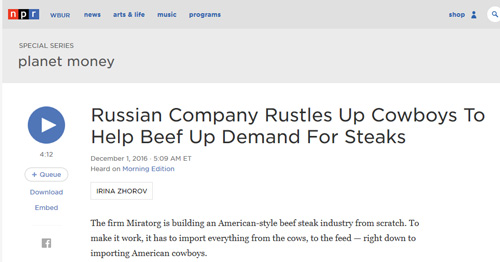 Once again, viewers of these videos are ahead of the rest of the world in understanding climate issues.
Rick Scott, the Climate denying Governor of Florida, also denies that his administration had a policy of not allowing the words “climate change”, “global warming” or “sea level rise” to be used by State employees. Nevertheless, former state employees are sticking by that claim.
I included that tidbit in my own video on sea level rise a few months before it became a top news item.
Hope y’all will support this effort by subscribing to the Yale Climate Forum channel.
https://www.youtube.com/user/yaleclim…