Protect Mother Earth
Published on Nov 15, 2016
It is very likely that 2016 will be the hottest year on record, with global temperatures even higher than the record-breaking temperatures in 2015. Preliminary data shows that 2016’s global temperatures are approximately 1.2° Celsius above pre-industrial levels, according to an assessment by the World Meteorological Organization (WMO).

Global temperatures for January to September 2016 have been about 0.88° Celsius (1.58°F) above the average (14°C) for the 1961-1990 reference period, which is used by WMO as a baseline. Temperatures spiked in the early months of the year because of the powerful El Niño event of 2015-16. Preliminary data for October indicate that they are at a sufficiently high level for 2016 to remain on track for the title of hottest year on record. This would mean that 16 of the 17 hottest years on record have been this century (1998 was the other one).

Long-term climate change indicators are also record breaking. Concentrations of major greenhouse gases in the atmosphere continue to increase to new records. Arctic sea ice remained at very low levels, especially during early 2016 and the October re-freezing period, and there was significant and very early melting of the Greenland ice sheet.

This lecture will begin with a review of the now-solid evidence for a human influence on the climate of recent decades. Such evidence includes instrumental measurements available for the past two centuries, paleoclimate observations spanning more than a millennium, and comparisons of the predictions from computer models with observed patterns of climate change. The lecture will then address future likely impacts of human-induced climate change including possible influences on sea level rise, severe weather, and water supply. The lecture will conclude with a discussion of solutions to the climate change problem. (Note: There is a small problem with the lights in the first three minutes).

Michael E. Mann is Distinguished Professor of Atmospheric Science at Penn State University, with joint appointments in the Department of Geosciences and the Earth and Environmental Systems Institute (EESI). He is also director of the Penn State Earth System Science Center (ESSC).

Dr. Mann received his Ph.D. in Geology & Geophysics from Yale University. His research involves the use of theoretical models and observational data to better understand Earth’s climate system. He was a Lead Author on the Observed Climate Variability and Change chapter of the Intergovernmental Panel on Climate Change (IPCC) Third Scientific Assessment Report in 2001 and was organizing committee chair for the National Academy of Sciences Frontiers of Science in 2003. He has received a number of honors including NOAA’s outstanding publication award in 2002. He contributed, with other IPCC authors, to the award of the 2007 Nobel Peace Prize. He was awarded the Hans Oeschger Medal of the European Geosciences Union in 2012 and the National Conservation Achievement Award for science by the National Wildlife Federation in 2013. He made Bloomberg News list of fifty most influential people in 2013.

Dr. Mann is a Fellow of the American Geophysical Union, the American Meteorological Society and the American Association for the Advancement of Science. He is author of more than 190 peer-reviewed and edited publications and has published the books Dire Predictions: Understanding Climate Change and The Hockey Stick and the Climate Wars: Dispatches from the Front Lines. He is also a co-founder of the award-winning science website RealClimate.org.

“The Madhouse Effect” is a part of series of lectures given at the University of Iceland on May 27th 2016 at the conference “The Past, the Future. How Fast, How Far? Threats Facing the Climate System”

On a special edition of On Contact, Chris Hedges travels to the Standing Rock encampment in North Dakota to listen to the frontline voices of those fighting to block the Dakota Access Pipeline.

Pilgrim’s Progress: Inside the American Nuclear-Waste Crisis – The New Yorker 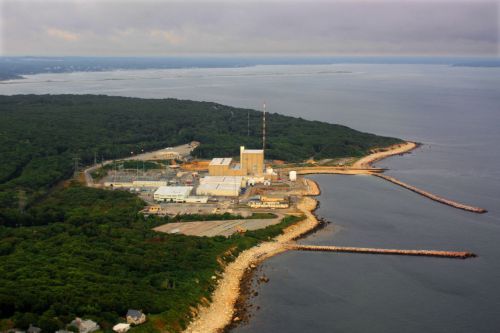 When Cape Cod’s Pilgrim Nuclear Power Station closes, in 2019, it will still be home to some eight hundred tons of spent fuel. COURTESY PAUL RIFKIN On a mild September day in 2012, Paul Rifkin asked a friend with a helicopter to help him perform an experiment. Rifkin, a retired restaurateur turned amateur photographer, wanted to capture aerial images of Pilgrim Nuclear Power Station, which sits on the shores of Cape Cod Bay, a quick drive from his home. He had taken an interest in the facility a year and a half earlier, after an earthquake and tsunami in Fukushima, Japan, caused a series of explosions and meltdowns in three coastal reactors—all nearly identical in design to the one at Pilgrim. Rifkin had recently joined the Cape Downwinders, a group of local residents concerned about the plant’s safety, and hoped to test assertions by a Pilgrim manager that the airspace above the plant was secure. The flyover photos he snapped that day suggested it wasn’t, but they also showed something else. On the site, near the reactor building, Entergy, the facility’s owner, had broken ground on a twelve-thousand-square-foot concrete pad. Rifkin and his fellow-activists would later learn that it was intended as storage space for the plant’s accumulating radioactive waste.

Pilgrim is one of the worst-rated nuclear facilities in the United States. Ever since it generated its first kilowatt of electricity, in December of 1972, it has been beset with mechanical failures and lapses in safety. In a single four-week stretch this summer, the plant was offline for a total of fifteen days because of a malfunctioning steam-isolation valve, elevated water levels in the reactor, and other problems. For years, Pilgrim’s detractors have kept steady pressure on Entergy and state officials through local protests, a sit-in at the governor’s office, and legal action. Last October, in a partial victory for activists, the company announced plans to shutter the plant, citing the expense of keeping it running in the face of cheap, abundant natural gas and increasingly competitive “renewable-energy resources.” The reactor is scheduled to go dark on May 31, 2019.

But that won’t end Pilgrim’s saga. Come June 1st, the plant will still host more than eight hundred tons of irradiated spent fuel. Most of the waste is currently stored in a forty-foot-deep pool of water, suspended four stories aboveground, next to the reactor core. The pool, which was designed to hold eight hundred and eighty fuel assemblies, now contains more than three times that number. (A federal regulatory waiver has allowed Entergy to pack the pool more densely than originally planned, a move repeated by operators across the country.) The National Academy of Sciences has warned that if the cooling system in a plant like Pilgrim failed, there would be little time before the water in the pool boiled away and exposed the radioactive rods to air. The resulting fire, the N.A.S. and anti-nuclear watchdogs have cautioned, could send across Cape Cod and northern New England many times the amount of radioactive cesium-137 released in the Chernobyl disaster. “Pools like the one at Pilgrim Nuclear Power Station are a disaster waiting to happen,” Senator Ed Markey, a Democrat from Massachusetts, told us in an e-mail.

In the past two years, Entergy has started the slow and expensive process of transferring some of the older, colder fuel rods—no longer potent enough to efficiently power the reactor, but still hazardous for millennia—into dry casks. The concrete-and-steel canisters, eighteen feet tall and weighing a hundred and eighty tons, have now begun to line up on Pilgrim’s concrete pad, a football field’s length from the Bay. Many in the scientific and activist communities see dry-cask storage as preferable to pools, but the fear among those in Plymouth and surrounding towns is that the casks will become a permanent fixture on the Cape. As John Mahoney, a town selectman in Plymouth, told us, “They’re going to stand on a concrete pad overlooking Massachusetts Bay for centuries, just like those statues on Easter Island.”

BBC Interviewer gets Schooled about Media Propaganda by Noam Chomsky

NotPercy203
Published on Jan 13, 2016
The BBC interviewer tries to argue that the media never promotes propaganda, or has any type of medium intrinsic bias; he gets well and truly screwed on every point he tries to make. The irony is that Andrew Marr’s total belief that he’s not spewing out propaganda or is too estblishment leaning is exactly the reason why the BBC gave him his job.