By Kelly Kasulis November 15, 2016
Since ancient times, hunger has led to conflict. But now, a recent study confirms the connection between climate change and armed violence around the world — plus how governments can avoid it.

The research comes out of Uppsala University in Sweden and the Peace Research Institute in Norway, and is part of an ongoing movement to understand how climate change affects security. In 2015, the US Department of Defense released a report suggesting that severe weather events may tip states “toward systemic breakdown,” but the Uppsala study drives the point home with refined statistical evidence.

Looking at 25 years of data collected from Africa and Asia between 1989 and 2014, the study found that droughts worsened by climate change don’t bring new violence into communities, but they can exacerbate and drag out conflict for marginalized groups who depend on farming for survival.

“[This] is the most advanced, detailed and complex, textured analysis,” said Ellen Messer, an anthropologist and food policy expert affiliated with Tufts, Brandeis, and Boston University. “Knowing that drought can affect agriculture, food security, livelihoods — social and political instability — the world still doesn’t respond appropriately.”
Get Today’s Headlines in your inbox:
The day’s top stories delivered every morning

One example is the ongoing rebellion in Ethiopia, where hundreds of antigovernment protesters have died in recent years. The conflict stems back to 2014, when the Ethiopian government announced its “Master Plan” to develop farmland used by Oromo people, an agrarian minority group with little political power. Now, hungry from withering crops and drought, Oromo people continue to fight back. As their political marginalization continued to go unaddressed, hunger may have become the last straw.

“[Ethiopia] fits the pattern of high agricultural dependence, a conflict that has happened for a long time, marginalization, and then last year’s drought,” said Nina von Uxkell, an assistant professor at Uppsala University and a lead member of the study. “It leads to an increasing level of protest and unrest.”

One takeaway: Governments that want to avoid or resolve armed conflict should patch up other parts of their society — “conditioning factors” such as political exclusion or economic turmoil — before climate change becomes the tipping point. It’s all about softening other issues so that people can cope.

“It really depends on how well the leadership can cater to the needs of all the population,” Messer said. “Those who might have an opportunity to nudge governments to be more inclusive should be constantly and ever more vigilant.”

Kelly Kasulis is a journalist living in Boston and the deputy digital editor of The GroundTruth Project. Follow her on Twitter @KasulisK.

Audio: The world reacts to Trump – The GroundTruth Project

Worried climate justice advocates hold up a to-do list to address climate change and its many effects in lieu of Donald Trump’s upcoming U.S. presidency. (Photo by Justine Calma/GroundTruth)

At the United Nations conference on climate change in Marrakech, 25,000 people from all over the world are reacting to the results of the U.S. presidential election, and wondering how it will affect both their work here and their lives back home.

Donald Trump has promised to pull the United States out of the Paris Agreement on climate change – the most significant global effort to take on the creeping crisis of global warming. The president-elect has also made disparaging comments about the countries and religions of many of the delegates here, prompting reactions that could be heard throughout the halls of the conference.

GroundTruth fellow Chris Bentley and I captured five of those voices, from an environmental activist based in China – the country Trump claims invented climate change as a hoax – to a Sudanese young woman worried about how climate change has fueled conflict in her country. 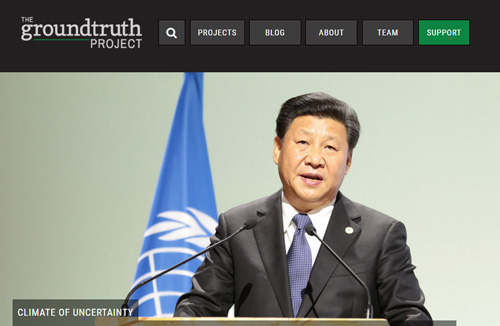 China’s president, Xi Jinping, spoke at the U.N. Conference of the Parties in 2015, where he and U.S. President Barack Obama backed a historic climate change agreement in Paris. (Photo by UNclimatechange/Flickr User)

Diplomats who gathered earlier this month in Marrakech, Morocco for COP22, the United Nations climate change summit, already faced a difficult proposition: how to fine-tune and implement the international agreement on climate change drafted last year in Paris. The election of Donald Trump as the next president of the United States confounded that process even more, throwing into question many aspects of the deal that previously seemed settled, including who will lead the industrialized nations of the world in reducing greenhouse gas emissions.

Kelly Sims Gallagher is a professor of energy and environmental policy at Tufts University’s Fletcher School of Law and Diplomacy. From June 2014 to September 2015, she served in the Obama Administration as a senior policy advisor in the White House Office of Science and Technology Policy and as senior China advisor in the Special Envoy for Climate Change office at the U.S. State Department.

She spoke with The GroundTruth Project’s Chris Bentley about Trump’s impact on the international relations of the Paris climate agreement, and what effect the U.S. election might have on climate politics in Europe and China.

US must transition to low-carbon energy – The Boston Globe

Part of a weekly series on the economic choices facing the United States and its relations with the rest of the world. For previous entries, click here.

Energy is the lifeblood of the economy. Without ample, safe, and low-cost energy, it is impossible to secure the benefits of modern life. For two centuries, fossil fuels — coal, oil, and natural gas — offered the key to America’s and the world’s growing energy needs. Now, because of global warming, we have to shift rapidly to a new low-carbon energy system.

The world has far more fossil fuel reserves than can be safely used. Many will stay in the ground, forever. Saudi Arabia, not Alberta, is the low-cost oil supplier. Investors in a resurrected Keystone would go broke, as have investors in coal. Wall Street figured this out long ago. 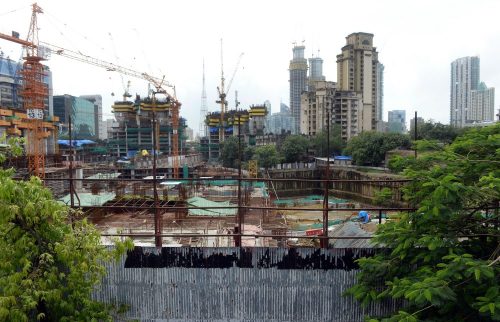 A general view of the construction site of the luxury apartment block The Park, also dubbed “Trump Tower,” in Mumbai, India, on July 31, 2015. The development is not owned by President-elect Donald Trump, but bears his name under a license agreement. (Indranil Mukherjee/AFP/Getty Images)
November 22, 2016

President-elect Donald Trump recently with Japanese Prime Minister Shinzo Abe, and also with three Indian businessmen. One meeting was in his capacity as the next president of the United States, the other as a private business person looking to build a property in Mumbai.

What Could Happen With Arctic Offshore Drilling | Here & Now

November 17, 2016
With Donald Trump’s upset victory, President Barack Obama still has time to try and cement any final pieces of his legacy. One open question is the fate of offshore oil and gas leasing.

Environmentalists want Obama to place the Arctic off-limits for offshore drilling, but the oil industry is lobbying to keep it open. A decision is expected any day.

And as Rachel Waldholz (@Waldholz) from Alaska Public Media’s energy desk reports, depending what Obama does, it might not be so easy for a Trump administration to override it.

More than 360 businesses and investors have signed a letter to President-elect Donald Trump, President Obama and Congress urging the U.S. to stay with the Paris Climate Agreement.

Trump has pledged to withdraw from the Paris pact, and has appointed climate deniers Myron Ebell and Stephen Bannon to his team.

Barry Parkin, chief sustainability officer of Mars, Incorporated, tells Here & Now‘s Meghna Chakrabarti what it would mean if the U.S. pulls out of the Paris Agreement, and how businesses are playing an important role in reducing climate emissions.

On what Mars has done to combat climate change

“We recognized that climate change was real and urgent back in 2009, when we made our first commitments to reducing our carbon footprint, and we committed to a set of commitments that were in line with the science, so that we did our part to not warm the planet by more than two degrees. And we’ve progressed down that path, so we committed to a 25 percent reduction in our greenhouse gas full operations by 2015. We hit that, and we’re on path to the next milestone of 40 percent reduction by 2020 and then zero carbon by 2040. So we’re exactly on the path that we need to be and exactly on the path we committed to. This is just a long-term march towards a low-carbon economy. And we’re doing that through efficiency and renewable projects.”

On environmental momentum in the business community

“I think the word ‘momentum’ is a good one. I think there is a significant momentum now, both with countries and corporations. And the reason there’s that momentum is that this is now a great business case. We’ve reached that tipping point where in many places renewable energy is more cost-effective than fossil fuels. So there’s just a great business case to be getting on with this, and many companies have now recognized that.”

On developing countries and preparing for climate change

“It’s going to through a combination of public funding and private funding. And in fact, the private funding will vastly outweigh the public funding. So it’s through corporations like Mars and others who are investing in sustainable agriculture all over the world. So it’s in our interests that the farmers in India — who are producing rice or any other material — are successful, because that’s the one way we guarantee a stable and quality supply of raw materials into our business.

So we are investing; we have been and we will continue to invest heavily in developing agriculture in the developing world. That in fact I think will be the lion’s share of investment to solve this. And we have activities all over the world working with smallholder farmers today, and we’re going to be investing even more into the future to help them get ready for climate change and to mitigate climate change.”

In The Arctic, Record-High Fall Temperatures Cause Concern | Here & Now

The sun is down in the North Pole right now, and the days and nights are typically frigid. But this fall, scientists are recording unusually balmy temperatures over the Arctic Ocean, at times more than 30 degrees Fahrenheit warmer than normal, and there’s no sea ice forming.

Jennifer Francis, an atmospheric scientist at Rutgers University, tells Here & Now’s Peter O’Dowd about the reasons behind these soaring temperatures, and what they mean for the region.

A few years ago Williston, North Dakota, was booming thanks to oil production. In 2012, Business Insider called Williston “home to America’s biggest oil boom.” But in 2015, the price of oil began to fall and the demand began to slow.

Here & Now‘s Peter O’Dowd talks with Howard Klug, mayor of Williston, North Dakota, about how the drop in oil prices is affecting his town.

It was never a secret. In 2010, the conservative political strategist Karl Rove took to the Wall Street Journal and laid out a plan to win majorities in state legislatures across the country.

“He who controls redistricting can control Congress,” read the subhead to Rove’s column.

The plan, which its architects dubbed REDMAP for Redistricting Majority Project, hinged on the fact that states redraw their electoral maps every 10 years according to new Census data. REDMAP targeted states where just a few statehouse seats could shift the balance to Republican control in the crucial Census year of 2010.

That plan worked spectacularly. It’s why today Republicans have a majority in nearly two-thirds of the country’s state legislative chambers. And it’s why in 2012 Democratic statehouse candidates won 51 percent of the vote in Pennsylvania, which voted for Barack Obama in the presidential election, yet those candidates ended up with only 28 percent of the seats in the legislature.

Here & Now‘s Robin Young learns how this happened from David Daley, editor-in-chief of Salon and the author of “Ratf**ked: The True Story Behind the Secret Plan to Steal America’s Democracy.”