With the Pence-Trump election history is repeating itself. We are headed for a presidency run from the Vice President’s office. The military-industrial-prison complex is likely to reinforce itself with the predictable array of war profiteers and prison construction and operations contractors deriving substantial benefits from government subsidies to the large corporations concerned. All the while railing against big government and the corruption of “the swamp” in Washington, D.C. it is likely that the Pence-Trump presidency will beat the drum for “making America great again” as in the past with a massive military build-up, substituting its own swamp rats for those who have benefited previously from the corporate subsidies from the taxpayers.

All of this is most likely to be accomplished with an immense paroxysm of fossil fuel gluttony and the attendant environmental degradation of water, soil and air on a scale never yet equaled in human history.  In the process, it is also quite likely that the precarious balance of the current global climate regime will be irretrievably tipped beyond the point of no return, leaving this and future generations no means of averting the ensuing mass destruction of human life and livelihoods around the world.

An earlier discussion of climate in the U.S. elections included:

For a more extended account of the collapse of corporate media accounting for why Americans for years have been “sleepwalking toward the end of the earth” see:

FOCUS: The Election Was Stolen – Here’s How

Before a single vote was cast, the election was fixed by GOP and Trump operatives.

tarting in 2013 – just as the Supreme Court gutted the Voting Rights Act – a coterie of Trump operatives, under the direction of Kris Kobach, Kansas Secretary of State, created a system to purge 1.1 million Americans of color from the voter rolls of GOP–controlled states.

The system, called Crosscheck, is detailed in my Rolling Stone report, “The GOP’s Stealth War on Voters,” 8/24/2016.

On Tuesday, we saw Crosscheck elect a Republican Senate and as President, Donald Trump. The electoral putsch was aided by nine other methods of attacking the right to vote of Black, Latino and Asian-American voters, methods detailed in my book and film, including “Caging,” “purging,” blocking legitimate registrations, and wrongly shunting millions to “provisional” ballots that will never be counted.

Trump signaled the use of “Crosscheck” when he claimed the election is “rigged” because “people are voting many, many times.” His operative Kobach, who also advised Trump on building a wall on the southern border, devised a list of 7.2 million “potential” double voters—1.1 million of which were removed from the voter rolls by Tuesday. The list is loaded overwhelmingly with voters of color and the poor. Here’s a sample of the list

Those accused of criminal double voting include, for example, Donald Alexander Webster Jr. of Ohio who is accused of voting a second time in Virginia as Donald EUGENE Webster SR.

No, not everyone on the list loses their vote. But this was not the only racially poisonous tactic that accounted for this purloined victory by Trump and GOP candidates.

For example, in the swing state of North Carolina, it was reported that 6,700 Black folk lost their registrations because their registrations had been challenged by a group called Voter Integrity Project (VIP). VIP sent letters to households in Black communities “do not forward.” If the voter had moved within the same building, or somehow did not get their mail (e.g. if their name was not on a mail box), they were challenged as “ghost” voters. GOP voting officials happily complied with VIP with instant cancellation of registrations.

The 6,700 identified in two counties were returned to the rolls through a lawsuit. However, there was not one mention in the press that VIP was also behind Crosscheck in North Carolina; nor that its leader, Col. Jay Delancy, whom I’ve tracked for years has previously used this vote thievery, known as “caging,” for years. Doubtless the caging game was wider and deeper than reported. And by the way, caging, as my Rolling Stone co-author, attorney Robert F. Kennedy Jr., tells me, is “a felony, it’s illegal, and punishable by high fines and even jail time.”

There is still much investigation to do. For example, there are millions of “provisional” ballots, “spoiled” (invalidated) ballots and ballots rejected from the approximately 30 million mailed in. Unlike reporting in Britain, US media does not report the ballots that are rejected and tossed out—because, after all, as Joe Biden says, “Our elections are the envy of the world.” Only in Kazakhstan, Joe.

While there is a great deal of work to do, much documentation still to analyze, we’ll have to pry it from partisan voting chiefs who stamp the scrub lists, Crosscheck lists and ballot records, “confidential.”

But, the evidence already in our hands makes me sadly confident in saying, Jim Crow, not the voters, elected Mr. Trump.

President Trump: How America Got It So Wrong

Donald Trump enters the White House as a lone wrecking ball of conspiratorial ideas, a one-man movement unto himself who owes almost nothing to traditional Republicans. Molly Riley/AP

Journalists and politicians blew off the warning signs of a Trump presidency – now, we all must pay the price

Tuesday, November 8th, early afternoon. Outside the Trump Tower in Manhattan, a man in the telltale red Make America Great Again hat taps me on the shoulder.

“You press?” he says, looking at a set of lanyards around my neck.

“Fuck yourself,” he says, thrusting a middle finger in my face. He then turns around and walks a boy of about five away from me down Fifth Avenue, a hand gently tousling his son’s hair.

This was before Donald Trump’s historic victory. The message afterward no doubt would have been the same. There’s no way to overstate the horror of what just went down. Sure, we’ve had some unstable characters enter the White House. JFK had health problems that led him to take amphetamine shots during the Cuban Missile Crisis. Reagan’s attention span was so short, the CIA had to make mini-movies to brief him on foreign leaders. George W. Bush not only didn’t read the news, he wasn’t interested in it (“What’s in the newspapers worth worrying about?” he once asked, without irony).

But all of these men were just fronts for one or the other half of the familiar alternating power structure, surrounded by predictable, relatively sober confederates who managed the day-to-day. Trump enters the White House as a lone wrecking ball of conspiratorial ideas, a one-man movement unto himself who owes almost nothing to traditional Republicans and can be expected to be anything but a figurehead. He takes office at a time when the chief executive is vastly more powerful than ever before, with nearly unlimited authority to investigate, surveil, torture and assassinate foreigners and even U.S. citizens – powers that didn’t seem to trouble people much when they were granted to Barack Obama.

Indigenous people from the Mesoamerican Alliance of Peoples and Forests protest at the climate change talks in Marrakech, Morocco. Photograph: Youssef Boudlal/Reuters

The president-elect wants to bypass the theoretical four-year procedure to exit the accord, according to a Reuters source

Donald Trump is looking at quick ways of withdrawing from the Paris climate agreement in defiance of widening international backing for the plan to cut greenhouse gas emissions, Reuters has reported.

Since the US president-elect was chosen, governments ranging from China to small island states have reaffirmed support for the 2015 Paris agreement at 200-nation climate talks running until 18 November in Marrakesh, Morocco.

But, according to Reuters, a source in the Trump transition team said the victorious Republican, who has called global warming a hoax, was considering ways to bypass a theoretical four-year procedure for leaving the accord. 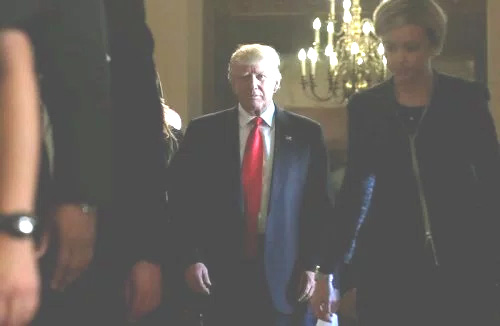 The ripples from a new American president are far-reaching, but never before has the arrival of a White House administration placed the livability of Earth at stake. Beyond his bluster and crude taunts, Donald Trump’s climate denialism could prove to be the lasting imprint of his unexpected presidency.

“A Trump presidency might be game over for the climate,” said Michael Mann, a prominent climate researcher. “It might make it impossible to stabilize planetary warming below dangerous levels.”

Kevin Trenberth, senior scientist at the US National Center for Atmospheric Research, added: “This is an unmitigated disaster for the planet.”

Trump has vowed to sweep away the climate framework painstakingly built over Barack Obama’s two terms. At risk is the Paris climate accord, which only came into force last week, and Obama’s linchpin emissions reduction policy, the Clean Power Plan.

At a pivotal moment when the planet’s nations have belatedly banded together to confront an existential threat, a political novice who calls global warming a “bullshit” Chinese-invented hoax is taking the helm at the world’s foremost superpower.

“Millions of Americans voted for a coal-loving climate denier willing to condemn people around the globe to poverty, famine and death from climate change,” said Benjamin Schreiber, climate director at Friends of the Earth US. “It seems undeniable that the United States will become a rogue state on climate change.”

US conservatives are already rubbing their hands in glee at the prospect of a bonfire of regulation. Trump wants the US to exit the Paris deal, which commits nations to keeping the global temperature rise below a 2C threshold, potentially setting off a cataclysmic domino effect where other countries also drop out or ease off efforts to decarbonize. The 2C limit, which was already a stern challenge, now appears perilous.