Turning the tide on desertification in Africa

In Senegal, the Acacia project has involved the planting and managing of Acacia forests in arid lands helping combat desertification while providing life-changing benefits to local communities. With two thirds of the African continent now classified as desert or drylands and desertification affecting a quarter of the world’s population, the breakthrough has the potential to transform the lives of vulnerable populations

The Fascist in November

Yes, we are talking about a fascist, one with many fascist friends who are loud and proud about their menacing white nationalism, a fascist gleefully endorsed by a Ku Klux Klan that traded in its bedsheets for power ties a long time ago and seized the ultimate prize in the early morning hours of November 9, 2016. A fascist Mussolini would have recognized on sight, for it was Mussolini’s movement that coined fascism in a barn nearly 100 years ago, calling it the merger of state and corporate power. What is that, if not President-elect Donald J. Trump?

The children of immigrants all across the United States woke this morning in a country soon to be led by an unapologetic xenophobe threatening mass deportation, and American Muslims woke to an era of intensified Islamophobia that may take paths we haven’t yet conceived of.

For more original Truthout election coverage, check out our election section, “Beyond the Sound Bites: Election 2016.”

Every woman in the country now wears a target, because the President of the United States considers them to be little more than sex toys. Boys will see this, boys will learn it, and some of them will likely act on it when they become men. My daughter now lives under this threat, as does yours.

And we can only imagine how the ongoing war on Black men, women and children will continue to worsen under this authoritarian leader, all in the name of that cold steel fist called “Law and Order.”

Impossible, the talking heads on TV said as the returns rumbled in. What he proposed during his campaign was so preposterous, so contra-constitutional, that it could never actually happen. This from representatives of the same mainstream media establishment that first empowered him so many strange months ago. It will never happen, they said.

Really? How will it be stopped? The Republicans all but ran the congressional table on Tuesday night, ensuring that Mr. Trump will control both the House and the Senate come January. Anything is constitutional, even torture and murder, if the Supreme Court says it is.

A dark day for the world | Editorial | Opinion | The Guardian

unthinkable is only unthinkable until it happens. Then, like the sack of Rome, it can seem historically inevitable. So it is with the global political earthquake that is the election of Donald Trump as the next president of the United States. If he is true to his campaign pledges, which were many and reckless, Mr Trump’s win will herald America’s most stunning reversal of political and economic orthodoxy since the New Deal in the 1930s, but with the opposite intention and effect. It halts the ailing progressive narrative about modern America and the 21st-century world in its tracks. It signals a seismic rupture in the American-dominated global liberal economic and political order that had seemed to command the 21st century after communism collapsed and China’s economy soared.

In that sense, the Trump triumph has echoes of the increasingly alarming general rightward shift in the politics of other post-industrial western democracies, to which progressives have again produced inadequate responses. The parallel with Britain’s Brexit vote is obvious and real. So, perhaps, is the further boost that the Trump triumph may hand to nationalists in many parts of Europe – Marine Le Pen jumped quickly on that bandwagon. The result will be lamented by liberals across America and beyond. But it will be cheered in Moscow and Damascus, which will feel emboldened. This is not a good week to be a Latvian or a Ukrainian, and another dire one to be a Syrian oppositionist. The result is also a generational challenge to progressive politics to find the radical and credible message that eludes them in so many countries, not just in America. 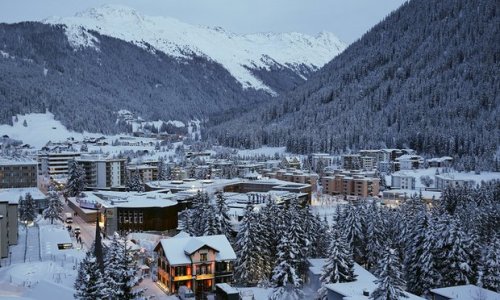 ‘Elite neoliberalism unleashed the Davos class. People such as Hillary and Bill Clinton are the toast of the Davos party. In truth, they threw the party.’ Photograph: Ruben Sprich/Reuters

People have lost their sense of security, status and even identity. Trump’s victory is the scream of an America desperate for radical change

But this leaves out the force most responsible for creating the nightmare in which we now find ourselves wide awake: neoliberalism. That worldview – fully embodied by Hillary Clinton and her machine – is no match for Trump-style extremism. The decision to run one against the other is what sealed our fate. If we learn nothing else, can we please learn from that mistake?

Here is what we need to understand: a hell of a lot of people are in pain. Under neoliberal policies of deregulation, privatisation, austerity and corporate trade, their living standards have declined precipitously. They have lost jobs. They have lost pensions. They have lost much of the safety net that used to make these losses less frightening. They see a future for their kids even worse than their precarious present.

Derrick Jensen attacks mainstream environmental journalism, which too often limits discussions to how ecological changes affect humans or the economy—with little or no regard for nonhuman life. With his signature compassionate logic, he argues that when we separate ourselves from the rest of nature, we in fact orient ourselves against nature, taking an unjust and, in the long run, impossible position.

http://democracynow.org – John Nichols, political writer for The Nation, argues Donald Trump’s upset victory to win at least 270 Electoral College votes and become U.S. president is the result of an election process that does not reflect the popular will, as his rival Hillary Clinton appears set to win the popular vote. “America has a lousy, messed-up election system, and we count votes really slow,” he notes. “What will turn out to be the reality … is that Hillary Clinton will actually beat Donald Trump by perhaps the largest margin that any loser beat a winner by in the popular vote. It will grow quite a bit.” Nichols notes President Obama’s popular vote tally grew from 225,000 on election night to 5 million, and says he expects mass protests. His new article is titled “These Election Results Will Define America.”

The Elite Got It Wrong. Trump’s Supporters Want You to Know Why – NBC News

NEW YORK — The polls were wrong — all of them.

So were the experts, the political consultants and the seasoned officials in both parties who predicted Donald Trump would lead his party to ruin. So were the markets, which had anticipated a Hillary Clinton victory and crashed overnight as her electoral firewall caught ablaze. So was every living president and past presidential nominee of both parties, save Bob Dole, all of whom opposed Trump.

So was this reporter and so many like him — and Trump told me as much.

When Trump appeared at an early New Hampshire showcase for likely presidential candidates in April 2014, the only reference I made to him in my story was a snarky passing mention that he spoke along with the “top-tier” contenders. Later, he sent me a handwritten note saying he “got the biggest response (by far) + standing ovation.” Trump went on to win the New Hampshire primary with ease.

“Who cares about the other half!”

At the Hilton in midtown Manhattan, the center of the wealthy and influential blue America and the place that Trump — the newly anointed champion of blue-collar America — paradoxically calls home, a crew of relative political outcasts at Trump’s victory party were eager to tell America what else its elite institutions got wrong.

New York City Mayor Rudy Giuliani, who could become Trump’s attorney general and who has called repeatedly for Hillary Clinton’s prosecution, was happy to offer his assessment of what we all missed. His answer: rural resentment against the “Eastern arrogant establishment.”

As the results rolled in, showing a surprisingly close race, NBC News’ Chuck Todd addressed the phenomenon that some knew of, but didn’t realize the depths.

If you want a snapshot of what the global energy map will look like under President Donald Trump, look no farther than the stock market.

Glencore Plc, the world’s top coal trader, surged more than 7 percent on Wednesday. Vestas Wind Systems A/S, the world’s biggest wind-turbine maker, plunged as much as 13 percent. The swing foretells a story of the most carbon-intensive fossil fuel making a comeback, while the fight against climate change — and investment in wind and solar power — languishes.

“De-carbonization, which has been the organizing principle of Obama’s energy policy, came to a screeching halt last night,” said Bob McNally, president of consultant Rapidan Group in Washington and a former senior energy official at the White House under Republican President George W. Bush.

In his only major energy policy speech before the elections, Trump said that he would rescind “job-destroying” environmental regulations within 100 days of taking office and cancel the climate deal reached last year in Paris.

“A Trump administration will focus on real environmental challenges, not the phony ones we’ve been looking at,” Trump told supporters in May in North Dakota, the birth-place of the U.S. shale revolution.