http://democracynow.org – Are North Dakota authorities waging a war against the public’s right to know about the ongoing Standing Rock pipeline protests? We are joined by documentary filmmaker Deia Schlosberg, who was charged earlier this month with three felonies for filming an act of civil disobedience in which climate activists manually turned off the safety valves to stop the flow of tar sands oil through pipelines spanning the U.S. and Canada. The actions took place in Minnesota, Montana, North Dakota and Washington state. Schlosberg is an award-winning filmmaker and was the producer of Josh Fox’s recent documentary, “How to Let Go of the World and Love All the Things Climate Can’t Change.” She was filming the action at a valve station owned by TransCanada in Walhalla, North Dakota. She was arrested along with the activists, and her footage was confiscated. Then she was charged with a Class A felony and two Class C felonies—which combined carry a 45-year maximum sentence.

http://democracynow.org – At least 27 people, including Hollywood actress Shailene Woodley, were arrested during the Standoff at Standing Rock on October 10, Indigenous Peoples’ Day, while attempting to blockade the Dakota Access pipeline construction at two separate worksites. Footage of Woodley’s arrest was streamed live to roughly 40,000 viewers on her Facebook page. She was later strip-searched in jail. She says her dedication to protest with indigenous people who are at the forefront of the fight remains strong: “Every time we allow another pipeline … we are endorsing the fossil fuel industry and only prolonging the time it is going to take to switch to renewable energy.” Woodley recently starred in the new Edward Snowden film, “Snowden.” She has appeared in the TV series “The Secret Life of the American Teenager” and has also starred in films including “The Divergent Series” and “The Fault in Our Stars.” She received a Golden Globe nomination for her role as Alex King in “The Descendants.”

Josh Fox: Arrest of Journalists and Filmmakers Covering the Dakota Pipeline is a Threat to Democracy

http://democracynow.org – Award-winning filmmaker Josh Fox joins us to discuss the arrest of fellow filmmaker Deia Schlosberg, who is charged with three felonies for filming an act of civil disobedience in which climate activists manually turned off the safety valves to stop the flow of tar sands oil through pipelines spanning the U.S. and Canada. “These people are not accessories to the crime, they are they media,” Fox says. “This is a constitutionally protected activity.” Schlosberg was the producer of Fox’s recent documentary, “How to Let Go of the World and Love All the Things Climate Can’t Change.”

http://democracynow.org – On Sunday, hundreds of water protectors erected a new frontline camp of several structures and tipis directly on the proposed path of the Dakota Access pipeline. The new frontline camp is just to the east of North Dakota State Highway 1806, across from the site where on September 3, over Labor Day weekend, Dakota Access security guards unleashed pepper spray and dogs against Native Americans trying to protect a sacred tribal burial ground from destruction. The water protectors also erected three road blockades that stopped traffic for hours on Highway 1806 to the north and the south of the main resistance camp and along County Road 134. The group cited an 1851 treaty, which they say makes the entire area unceded sovereign land under the control of the Sioux. The blockades were dismantled late Sunday. We speak with Tara Houska, national campaigns director for Honor the Earth. She is Ojibwe from Couchiching First Nation.

http://democracynow.org – We go to North Dakota for an update on the ongoing Standoff at Standing Rock, where thousands of Native Americans representing more than 200 tribes from across the Americas are resisting the construction of the $3.8 billion Dakota Access pipeline, which is slated to carry oil from North Dakota’s Bakken oilfields through South Dakota, Iowa and into Illinois. On Saturday, over 100 people, who call themselves protectors, not protesters, were arrested at a peaceful march after they were confronted by police in riot gear, carrying assault rifles. They say police pepper-sprayed them and then arrested them en masse, and discharged rubber bullets to shoot down drones the water protectors were using to document the police activity. We are joined by Sacheen Seitcham, media activist with West Coast Women Warriors Media Cooperative who was arrested Saturday along with more than 80 other protesters and journalists at a construction site for the Dakota Access pipeline in North Dakota. 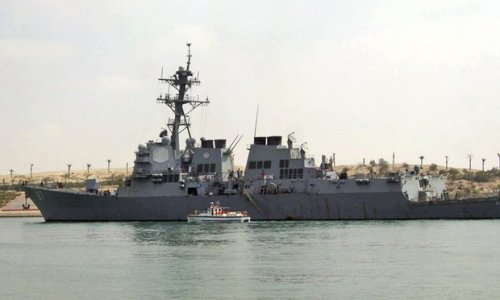 The US navy on Sunday began investigating a possible overnight missile attack from Yemen on a group of American warships in the Red Sea, amid uncertainty about what transpired.

The US just bombed Yemen, and no one’s talking about it

The Red Sea and the nearby strategic Bab el-Mandeb strait, a crucial chokepoint for international shipping and crude oil, has been the scene of what the US describes as at least two missile attacks from rebel-held territory in Yemen. American forces have fired back once with Tomahawk missiles, destroying mobile radar positions in the first shots fired by the US in anger in the Yemen war.

In the latest incident, a group of American warships in the Red Sea on Saturday night “had indications of a possible inbound missile threat and deployed appropriate defensive measures”, said Capt Paula Dunn, a spokeswoman for US navy forces central command.

Dunn said in a statement that all ships and sailors were safe, without elaborating.

An American defense official said on Sunday that one of the ships saw on radar what sailors believed to be missiles being fired on it out of Yemen at night. The official spoke on condition of anonymity to discuss details of the incident not yet made public.

Food waste: Climate is changing. Food and agriculture must too.

Food and Agriculture Organization of the United Nations
13,235

Food systems: Climate is changing. Food and agriculture must too.

World Food Day 2016 – Climate is changing. Food and agriculture must too.

One of the biggest issues related to climate change is food security. The world’s poorest – many of whom are farmers, fishers and pastoralists – are being hit hardest by higher temperatures and an increasing frequency in weather-related disasters.
At the same time, the global population is growing steadily and is expected to reach 9.6 billion by 2050. To meet such a heavy demand, agriculture and food systems will need to adapt to the adverse effects of climate change and become more resilient, productive and sustainable. This is the only way that we can ensure the wellbeing of ecosystems and rural populations and reduce emissions.