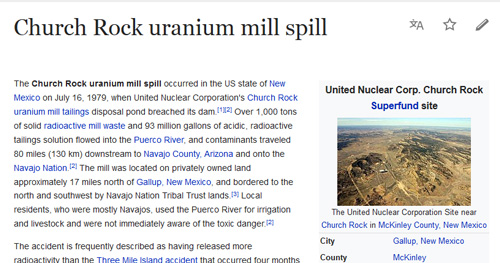 The Church Rock uranium mill spill occurred in the US state of New Mexico on July 16, 1979, when United Nuclear Corporation’s Church Rock uranium mill tailings disposal pond breached its dam.[1][2] Over 1,000 tons of solid radioactive mill waste and 93 million gallons of acidic, radioactive tailings solution flowed into the Puerco River, and contaminants traveled 80 miles (130 km) downstream to Navajo County, Arizona and onto the Navajo Nation.[2] The mill was located on privately owned land approximately 17 miles north of Gallup, New Mexico, and bordered to the north and southwest by Navajo Nation Tribal Trust lands.[3] Local residents, who were mostly Navajos, used the Puerco River for irrigation and livestock and were not immediately aware of the toxic danger.[2]

The accident is frequently described as having released more radioactivity than the Three Mile Island accident that occurred four months earlier and was the largest release of radioactive material in U.S. history.[2][4][5][6] The spill contaminated groundwater and rendered the Puerco unusable by local residents. The governor of New Mexico refused the Navajo Nation‘s request that the site be declared a federal disaster area, limiting aid to affected residents.[7] The event received less media coverage than that of Three Mile Island, likely because it occurred in a lightly populated, rural area.[8] Some scholars suggest there were elements of class and racism to the neglect as well, since it affected primarily poor Native Americans.[5]