In an emotionally charged talk, MacArthur-winning activist Majora Carter details her fight for environmental justice in the South Bronx — and shows how minority neighborhoods suffer most from flawed urban policy.

D.C.’s decade-old problem of lead in water gets new attention during Flint crisis

The District’s water utility found itself on the defensive this week after a Virginia Tech professor who has crusaded against lead in drinking water told a congressional panel that the city’s lead problem in the early 2000s was “20 to 30 times worse” than what has occurred recently in Flint, Mich.

D.C. Water officials said that they didn’t take issue with professor Marc Edwards’s statement Tuesday to a House committee because the District is a much larger city than Flint, and the elevated levels of lead in the city’s tap water occurred over several years vs. about 18 months in Flint.

“We’ve never denied what happened in the early 2000s,” said George S. Hawkins, general manager of D.C. Water. “No question, it was a very significant problem in the District . . . . We certainly learned from it, and now we have a very advanced [lead] control system in place.”

The image of the Earth rising over the surface of the moon, a photograph taken by the first U.S. astronauts to orbit the moon. (Photo: NASA/cc)

Direct and indirect dangers from global warming are so grave that the issue should be near the top of the U.S. campaign agenda, instead of being downplayed or denied.

President Obama calls it “terrifying” and the greatest long-term threat facing the world. Three hundred seventy-five of the world’s top experts just warned of “severe and long-lasting consequences” for the planet if America’s next president drops the ball. Yet only 19 percent of registered voters say it’s a top issue; Hillary Clinton increasingly ducks the topic, and Donald Trump characteristically dismisses it all as a “hoax.” 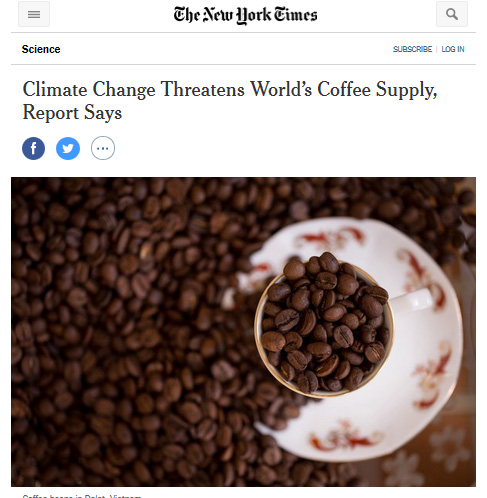 A report examining the many ways climate change threatens coffee and coffee farmers has alarmed people who are now imagining what it would be like getting through the day without their caffeine fix.

The report, released this month by the Climate Institute, a nonprofit organization in Australia, was commissioned by Fairtrade Australia and New Zealand, the regional hub of the global Fairtrade system.

Though it contains little new research, it has made waves by collating an array of available literature indicating that climate change will have a stark effect on the world’s coffee supply.

The report emphasizes the threat warming temperatures pose to farmland, citing a study from the March 2015 issue of the journal Climatic Change that found climate change “will reduce the global area suitable for coffee by about 50 percent across emission scenarios.”