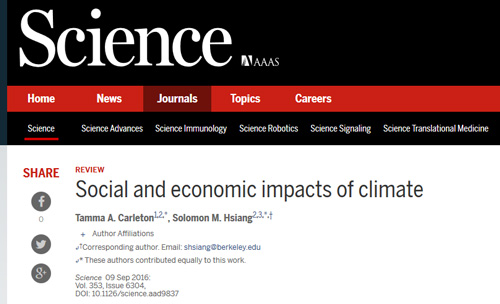 For centuries, thinkers have considered whether and how climatic conditions—such as temperature, rainfall, and violent storms—influence the nature of societies and the performance of economies. A multidisciplinary renaissance of quantitative empirical research is illuminating important linkages in the coupled climate-human system. We highlight key methodological innovations and results describing effects of climate on health, economics, conflict, migration, and demographics.

Because of persistent “adaptation gaps,” current climate conditions continue to play a substantial role in shaping modern society, and future climate changes will likely have additional impact. For example, we compute that temperature depresses current U.S. maize yields by ~48%, warming since 1980 elevated conflict risk in Africa by ~11%, and future warming may slow global economic growth rates by ~0.28 percentage points per year.

In general, we estimate that the economic and social burden of current climates tends to be comparable in magnitude to the additional projected impact caused by future anthropogenic climate changes. Overall, findings from this literature point to climate as an important influence on the historical evolution of the global economy, they should inform how we respond to modern climatic conditions, and they can guide how we predict the consequences of future climate changes.

The Bush administration’s former top environmental official has apologized for telling the public the air in Lower Manhattan was safe to breathe after the 9/11 attacks. Christine Todd Whitman was head of the Environmental Protection Agency in 2001. In the days after the World Trade Center towers collapsed, Whitman repeatedly stated there was no threat of toxic air pollution.

Christine Todd Whitman: “Everything we’ve tested for, which includes asbestos, lead and VOCs, have been below any level of concern for the general public health.”

Speaking to The Guardian, Whitman acknowledged for the first time that her statements put people’s lives in jeopardy. She said, “I’m very sorry that people are sick. I’m very sorry that people are dying, and if the EPA and I in any way contributed to that, I’m sorry.” Whitman’s apology came as The Guardian reported the death toll among those sickened by the toxic fallout of ground zero will soon exceed the number of people killed on the day of the 9/11 attacks. 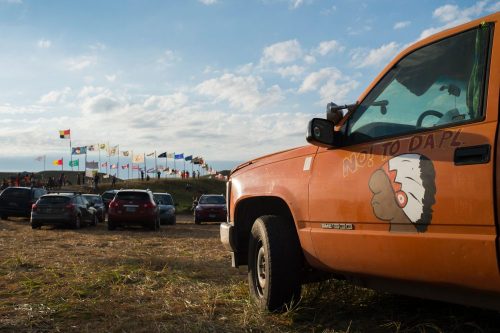 Flags of Native American tribes from across the U.S. and Canada line the entrance to a protest encampment near Cannon Ball, North Dakota, where members of the Standing Rock Sioux Tribe and their supporters have gather to voice their opposition to the Dakota Access Pipeline (DAPL), Sept. 3, 2016. (Robyn Beck/AFP/Getty Images)

On Friday, the federal government halted construction on a portion of the Dakota Access Pipeline from North Dakota to Illinois, after months of protests by native tribes who say the pipeline is a violation of their tribal rights and will poison their waterways.

But earlier that same day, a federal judge decided that construction on the pipeline could continue.

Lakota Activist Debra White Plume from Pine Ridge: Why I am a Water Protector at Standing Rock

http://democracynow.org – While Democracy Now! was covering the standoff at Standing Rock earlier this month, we spoke to longtime Lakota water and land rights activist Debra White Plume, who was born and raised on the Pine Ridge Indian Reservation in South Dakota and lives along the banks of Wounded Knee Creek. She described what the Dakota Access pipeline means to her.

http://democracynow.org – To discuss Friday’s district court ruling in the Standing Rock Sioux Tribe’s lawsuit against the U.S. government to stop the Dakota Access pipeline, and the White House’s dramatic intervention less than an hour later, we go to Standing Rock to speak with Standing Rock Sioux Chairman Dave Archambault. We are also joined by attorney Jan Hasselman, who brought the tribe’s case to federal court.

http://democracynow.org – In a dramatic series of moves on Friday, the White House intervened in the ongoing fight against the Dakota Access pipeline, less than an hour after a federal judge rejected the Standing Rock Sioux Tribe’s request for an injunction against the U.S. government over the pipeline. “It’s not a solid victory now but just the weight, feeling that weight that I’ve been carrying for the last couple months is lifting. I feel like I could breathe right now,” says Floris White Bull. We feature the reactions to government’s intervention from some of the thousands of Native Americans who have gathered along the Cannonball River by the Standing Rock Sioux Reservation to resist the pipeline’s construction.