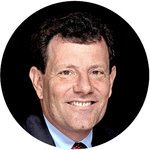 ONE of Donald Trump’s 100 wackiest ideas is that climate change is a hoax fabricated by China to harm America.

“The concept of global warming was created by and for the Chinese in order to make U.S. manufacturing uncompetitive,” Trump once tweeted.

He later said, unconvincingly, that he had been kidding about China, but he has emphasized that he does not believe in climate change and would end serious efforts to prevent it.

That obstinacy confronts a new wave of research showing that climate change is much more harmful than we had imagined.

Until now, the focus has been on rising seas, more intense hurricanes, acidification of oceans, drought and crop failures. But new studies are finding that some of the most important effects will be directly on our bodies and minds.

When the mercury surges, people die. A heat wave in 2015 melted asphalt in New Delhi, India, and caused the deaths of at least 2,500 people.
Harish Tyagi / European Pressphoto Agency