http://democracynow.org – On Wednesday, British politician Nigel Farage joined Donald Trump at a campaign rally in Mississippi. Farage was one of the leaders of Britain’s campaign to leave the European Union, known as “Brexit.” Trump has praised Brexit, saying the British people had “taken back their country.” We speak with Academy Award-winning actress Emma Thompson about Brexit and Donald Trump.

http://democracynow.org – Embattled Brazilian President Dilma Rousseff is slated to testify today at her impeachment trial—a trial that many are calling a coup by her right-wing political rivals. Rousseff has denounced the proceedings and called for early elections to unite the country. Rousseff’s impeachment stems from accusations she tampered with government accounts to hide a budget deficit. She was suspended earlier this year and has maintained her innocence, accusing her political opponents of spearheading the proceedings to shield themselves from prosecution and undo years of progressive policies. The Brazilian group Transparency Brazil says 60 percent of Brazilian lawmakers are currently under criminal investigation or have already been convicted of crimes ranging from corruption to election fraud. Rousseff’s opponents now need 54 votes, or two-thirds of the 81-seat Senate, to convict her of violating budget laws. Her impeachment would end 13 years of left-wing Workers’ Party rule in Brazil and bring to power interim President Michel Temer for the remaining two years of Rousseff’s term. Temer is also deeply unpopular and currently under investigation himself, accused of receiving illegal campaign contributions linked to the state oil company Petrobras.

Glenn Greenwald: Why Are Saudis Donating Millions to Clinton Foundation?

http://democracynow.org – Questions surrounding Hillary Clinton and the Clinton Foundation continue to grow. On Sunday, Democratic National Committee interim chairperson Donna Brazile defended Clinton’s meetings as secretary of state with Clinton Foundation donors, saying, “When Republicans meet with their donors, with their supporters, their activists, they call it a meeting. When Democrats do that, they call it a conflict.” Donna Brazile’s comments come in response to an Associated Press investigation revealing that while Hillary Clinton served as secretary of state, more than half of the private citizens she met with during the reporting period had donated to the Clinton Foundation. The AP investigation comes after a three-year battle to gain access to State Department calendars. The analysis shows that at least 85 of 154 people Hillary Clinton had scheduled phone or in-person meetings with were foundation donors. We speak to Pulitzer Prize-winning journalist Glenn Greenwald of The Intercept. His most recent piece is headlined “Why Did the Saudi Regime and Other Gulf Tyrannies Donate Millions to the Clinton Foundation?”

Fracking Could Destroy Your Health

Diana Best, Greenpeace USA, joins Thom. A new study has tied fracking to a host of serious health conditions – ranging from migraines to sinus infections. Is it time to ban the practice once and for all?

Plans to cut airline CO2 using greener jet fuels made from waste wood have been dismissed as a “pipe dream” by environmentalists.

Several high octane, waste-based biofuels are being tested by airlines as a way of curbing CO2.

UN officials are set to endorse these fuels as a key part of global plans to stabilise aviation emissions by 2020.

But critics say the plans are unrealistic and airlines are not taking the issue seriously.

One of the big failures of the Paris climate agreement, adopted in December 2015, is that it doesn’t cover emissions from shipping or aviation.

A coffee picker carries sacks of coffee cherries at a plantation in the Nogales farm in Jinotega, Nicaragua. Scientists think Nicaragua could lose the majority of its coffee-growing areas by 2050. Photograph: Oswaldo Rivas/Reuters Michael Slezak Monday 29 August 2016 00.55 EDT
More than 120 million of the world’s poorest depend on the coffee economy, a report says, and their livelihoods are already suffering from temperature rises

Climate change is going to halve the area suitable for coffee production and impact the livelihoods of more than 120 million of the world’s poorest people who rely on the coffee economy, according to a new report by the Climate Institute, commissioned by Fairtrade Australia & New Zealand.

The report findings follow stark warnings by some of the world’s biggest coffee producers, including Starbucks and Lavazza, who have said climate change is posing a severe risk to the industry. 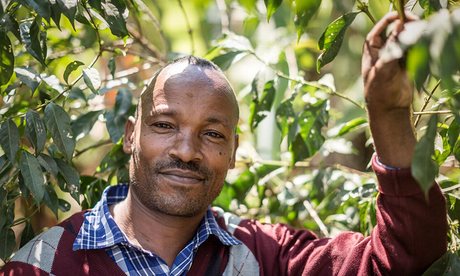 Journey to Ethiopia, the origin of coffee

Climate change is already impacting coffee crops around the world, according to the report. In Tanzania, where 2.4 million people’s livelihoods rely on coffee, production has fallen by about 137kg per hectare for every 1C rise in the minimum temperature on farms. Overall there has been a 50% decline there since the 1960s.

Extreme temperatures and unusual high-altitude rains have also sparked costly waves of pests and disease through coffee farms. In 2012, coffee leaf rust affected half of the coffee across Central America – some producers in Guatemala lost up to 85% of their crop.

China to present proposal to spur global growth through innovation

Raising awareness about the importance of wildlife conservation

Talks over the so-called Transatlantic Trade and Investment Partnership – or TTIP – between Europe and the US have essentially failed, but ‘nobody is really admitting it”, Germany’s economy minister has said.

Sigmar Gabriel, who is Angela Merkel’s second-in-command, said hardly any progress had been made in recent years. Slamming the negotiations, the Vice-Chancellor said neither side had managed to even agree on a single common chapter.

CA Farmers Use Advanced Drone Tech to Save Water

In the drought-stricken West, where every drop of water counts, some California farmers are using advanced drone technology to save the scarce resource. (Aug. 29)