Jul 22, 2016This June was the hottest ever, and July has brought even more heat, particularly in the Midwest. Credit: NOAA

Extreme heat waves like the current string of scorching days in the Midwest have become more frequent worldwide in the last 60 years, and climate scientists expect that human-caused global warming will exacerbate the dangerous trend in coming decades. It comes with potentially life-threatening consequences for millions of people.

Research has shown that overall mortality increases by 4 percent during heat waves compared to normal days in the U.S. A study in the journal Environmental Health Perspectives in 2011 suggested that rising summer temperatures could kill up to 2,200 more people per year in Chicago alone during the last two decades of the 21st century.

“The climate is changing faster than we’ve ever seen during the history of human civilization on this planet, and climate change is putting heat waves on steroids,” Katharine Hayhoe, director of the Climate Science Center at Texas Tech University, said during a news conference on Thursday. “Heat waves are getting more frequent and stronger.”

Temperatures this week soared into the 90s from Minnesota to Iowa, combining with high humidity to send heat indices well above the 100-degree Fahrenheit mark, considered a threshold for conditions dangerous to human health.

A new report shows that with the proposed natural gas pipelines, the United States cannot meet its climate commitments.

The climate action movement has gotten a lot of wins during the Obama administration.

The Keystone XL pipeline permit denial. The Clean Power Plan. The proposed methane rules. These things are all part of an effort to limit carbon emissions and avoid the most catastrophic effects of climate change.

But, as it turns out, these actions are not enough.

The country is in the process of building hundreds of miles of natural gas pipeline that will tie the United States to fossil fuel production and consumption for decades — well past when most scientists predict we will have done irreparable harm to our human habitat.

“Once the pipelines are built and permitted and operating, it significantly lowers the cost for operators to get their gas to market,” Stephen Kretzmann, executive director of Oil Change International, told ThinkProgress. “All of that additional production that gets triggered needs to be thought about.”

In fact, if the United States continues with its current natural gas policy, there is no way for the country to meet its emissions reduction goals, according to a report released Friday by Oil Change International.

At the award-winning seafood restaurant in downtown Cleveland that The Atlantic rented out for the entire four-day Republican National Convention, GOP Rep. Bill Johnson turned to me and explained that solar panels are not a viable energy source because “the sun goes down.”

Johnson had just stepped off the stage where he was one the two featured guests speaking at The Atlantic’s “cocktail caucus,” where restaurant staff served complimentary wine, cocktails, and “seafood towers” of shrimp, crab cakes, oysters, and mussels to delegates, guests, reporters and, of course, the people paying the bills.

The event was sponsored by the American Petroleum Institute, the lobbying arm of fossil fuel giants like ExxonMobil, Chevron, and ConocoPhilips.

Johnson, a climate denier and influential member of the House Committee on Energy and Commerce, spoke of a future when American scientists “solve these big problems” and “figure out how to harness the sun’s energy, and store it up, so that we can put it out over time.” His hypothetical invention, of course, is called a battery, and was invented over 200 years ago.

Instead of balancing Johnson with an environmentalist or a climate scientist, The Atlantic paired Johnson with another notorious climate denier: Rep. Kevin Cramer, R-N.D., who is an energy adviser to Donald Trump. Cramer has called global warming “fraudulent science by the EPA,” and once told a radio audience in 2012 that “we know the globe is cooling.”

The World Is Blue, Sylvia A. Earle

A Silent Spring for our era, this eloquent, urgent, fascinating book reveals how just 50 years of swift and dangerous oceanic change threatens the very existence of life on Earth. Legendary marine scientist Sylvia Earle portrays a planet teetering on the brink of irreversible environmental crisis.

In recent decades we’ve learned more about the ocean than in all previous human history combined. But, even as our knowledge has exploded, so too has our power to upset the delicate balance of this complex organism. Modern overexploitation has driven many species to the verge of extinction, from tiny but indispensable biota to magnificent creatures like tuna, swordfish, and great whales. Since the mid-20th century about half our coral reefs have died or suffered sharp decline; hundreds of oxygen-deprived “dead zones” blight our coastal waters; and toxic pollutants afflict every level of the food chain.

Fortunately, there is reason for hope, but what we do—or fail to do—in the next ten years may well resonate for the next ten thousand. The ultimate goal, Earle argues passionately and persuasively, is to find responsible, renewable strategies that safeguard the natural systems that sustain us. The first step is to understand and act upon the wise message of this accessible, insightful, and compelling book. 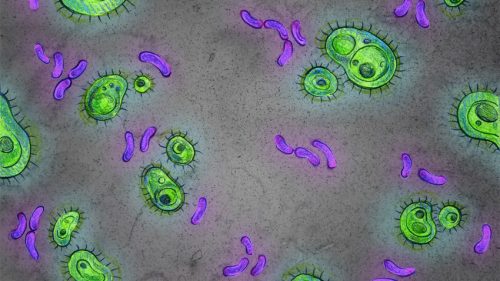 Different types of gut microbes have coevolved with humans for millions of years.

J. Luecke/University of Texas at Austin

Humans did not evolve alone. Tens of trillions of microbes have followed us on our journey from prehistoric ape, evolving with us along the way, according to a new study. But the work also finds that we’ve lost some of the ancient microbes that still inhabit our great ape cousins, which could explain some human diseases and even obesity and mental disorders.

Researchers have known for some time that humans and the other great apes harbor many types of bacteria, especially in their guts, a collection known as the microbiome. But where did these microbes come from: our ancient ancestors, or our environment? A study of fecal bacteria across all mammals suggested that the microbes are more likely to be inherited than acquired from the environment. But other studies have found that diet plays a major role in shaping the bacteria in our guts.

To solve the mystery, Andrew Moeller turned to wild apes. As part of his doctoral dissertation, the evolutionary biologist, now a postdoc at the University of California, Berkeley, studied gut bacteria isolated from fecal samples from 47 chimpanzees from Tanzania, 24 bonobos from the Democratic Republic of the Congo, 24 gorillas from Cameroon, and 16 humans from Connecticut. In these samples, he and colleagues at the University of Texas (UT), Austin, compared the DNA sequences of a single rapidly evolving gene that is common in the gut bacteria in apes, including humans. They then sorted the different DNA gene sequences into family trees.

It turns out that most of our gut microbes have been evolving with us for a long time. Moeller found that two of three major families of gut bacteria in apes and humans trace their origins to a common ancestor more than 15 million years ago, not primarily to bugs picked up from their environment. But as the different species of apes diverged from this ancestor, their gut bacteria also split into new strains, and coevolved in parallel (a process known as cospeciation) to adapt to differences in the diets, habitats, and diseases in the gastrointestinal tracts of their hosts, the team reports today in Science. Today, these microbes are finely adapted to help train our immune systems, guide the development of our intestines, and even modulate our moods and behaviors.

“It’s surprising that our gut microbes, which we could get from many sources in the environment, have actually been coevolving inside us for such a long time,” says project leader Howard Ochman, an evolutionary biologist at UT Austin.

Boards supporting sectors of the agricultural industry from eggs to beef to avocados are cited in the new bill. Photograph: Alamy

The move would affect the American Egg Board, the body revealed by the Guardian last year to have used its funds to wage a massive and secret campaign against Hampton Creek, a startup selling egg-free mayonnaise.

The law would broadly reform US Department of Agriculture marketing boards that allow small groups of executives, usually representatives from the largest agricultural producers, to spend funds collected from their smaller competitors, ostensibly to promote American farming.

Boards supporting sectors of the agricultural industry from eggs to beef to avocados are cited in the new bill.

Agricultural marketing programs, or “checkoff” programs, collect levies on commodities made in the US and use the funds to promote those commodities. But the restrictions on those funds are not always obeyed by the boards themselves, say the senators.

The bill would make the budgets of checkoff programs public. It would also require the programs to disclose any use of outside contractors, such as publicity firms or advertising agencies.

Lee, a conservative who champions limited government and often criticizes federal programs for “waste, fraud and abuse”, is rarely seen agreeing with the more liberal Booker, but here the issue unites environmentalists and capitalists.

“Agriculture’s vital role in our economic success and national security is a bond that we share with other nations all over the world. With agricultural development as a core component of his strategy, President Obama’s Feed the Future initiative has achieved impressive results in combating poverty and hunger, reaching millions of small farmers with tools and technologies and delivering critical nutrition to millions of children. In effect, Feed the Future represents the best of our American values-compassion, innovation, collaboration, and progress toward a world free of hunger and inequality. As the world and our climate continue to change, we know that our work must continue. With the signing of the Global Food Security Act by the President today, we can be assured that this important work will carry on long past this Administration. USDA has been committed to ensuring that our contributions – through research and innovation, capacity building, technical assistance to build agricultural productivity, and school feeding programs– produced meaningful results. I am grateful that with the enactment of this legislation, the United States will continue to play a leading role in helping create a more food secure world and, therefore, a more secure United States of America.”