Climate change is the biggest challenge humanity has ever faced – and it is also our greatest opportunity. We have the solutions we need, but we are in a race against the clock to implement them in time.
Visit http://www.timetochoose.com/ for more

Oscar-winning documentary director Charles Ferguson:
I made TIME TO CHOOSE because climate change is the most important issue facing humanity and we urgently need broader understanding of how enormously we would all benefit from addressing it. Fortunately it is a challenge that we hold in common, and the film shows that across the globe, in myriad ways, people are coming together to find and implement solutions. We’re not too late, and our hope is that TIME TO CHOOSE will help audiences see both the tragedy that is unfolding and the remarkable and innovative ways in which humanity is finding a better way forward.

In making the film, my team and I traveled to parts of the world where climate solutions are not only politically unpopular – it is often personally dangerous to advocate them. I think it’s important for people to understand that the corruption, inequality and violence faced by many people the world over are tied to the pollution, waste and destruction that are fueling climate change. If we solve one, we help solve the other.

My most surprising discovery in making this film is also the most crucial fact about this issue: the solutions to climate change are already here, waiting for us. We saw them in places as diverse as Indonesia, Kenya, China, Western Europe and California. Everywhere we traveled, people were developing new ways of living and benefiting from them. Their stories and their work are what will lead us forward. http://www.timetochoose.com/about/

The climate change documentary ‘Time to Choose’ is an urgent, hopeful plea http://www.latimes.com/entertainment/… 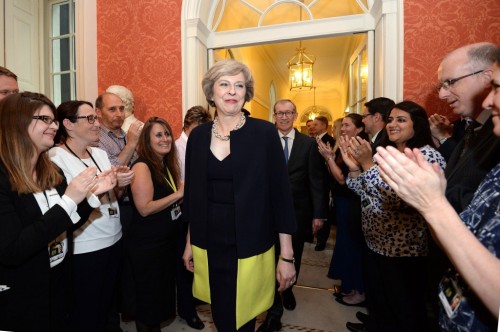 The fallout from Brexit continues. The pound has hit record lows against the dollar. Former Prime Minister David Cameron is out, and a new administration of Leave campaigners is in, headed by Theresa May.

This is shocking news

If there is anything that environmentalists hate, it is when “business” and “industry” are valued more than the stability of our climate, which, they would argue, is invaluable.

“This is shocking news. Less than a day into the job and it appears that the new Prime Minister has already downgraded action to tackle climate change, one of the biggest threats we face,” Friends of the Earth U.K. CEO Craig Bennett said in a statement emailed to ThinkProgress.

But while changing the actual name of the office that works on climate change might seem extreme, the change in branding might not be indicative of where the government plans to go.

Simon Bullock, a spokesperson for Friends of the Earth, noted that Greg Clarke, the new head of the newly formed department, is “decent” on climate. “It’s reassuring that although [climate
change] is not in the new department’s title, Clark at least sees climate as a part of his role,” Bullock said in an email.

On Thursday, the new secretary put out a statement, saying he was “thrilled to have been appointed to lead this new department charged with delivering a comprehensive industrial strategy, leading government’s relationship with business, furthering our world-class science base, delivering affordable, clean energy and tackling climate change.”

Under the new departmental structure, oversight of universities was moved out of the former Business and Industrial Strategies Department, so merging the formerly small DECC with business perhaps makes more sense than skeptics might think.

Screening of “Taxi to the Dark Side” at Cinema Arts Center, Huntington, L.I., NY

Reasons for producing this documentary film are given by Executive Producer Donald Glascoff Jr. The complete 106 min. documentary is shown and is followed by a Q & A. This video makes clear the role of the USA in torture.

The Square movie is a documentary about the Egyptian revolution behind the headlines. Follow a group of activists in Tahrir Square, risking their lives to build a new society of conscience.

A film by Jehane Noujaim – director of Control Room, Startup.com, Egypt We Are Watching You, Rafea Solar Mama, and more.

enron the smartest guys in the room – Trailer

enron the smartest guys in the room – Trailer

Taxi to the Dark Side

Award-winning filmmaker Alex Gibney joins Democracy Now to talk about his Academy Award-nominated film Taxi to the Dark Side. The documentary investigates some of the most egregious abuses associated with the so-called “war on terror.

“Taxi To The Dark Side” – Trailer

This documentary murder mystery examines the death of an Afghan taxi driver at Bagram Air Base from injuries inflicted by U.S. soldiers. In an unflinching look at the Bush administration’s policy on torture, the filmmaker behind Enron: the Smartest Guys in the Room takes us from a village in Afghanistan to Guantanamo and straight to the White House. In English and Pashtu.

NO END IN SIGHT Trailer

NO END IN SIGHT

The first film of its kind to chronicle the reasons behind Iraq’s descent into guerilla war, warlord rule, criminality and anarchy, “No End In Sight” is a jaw-dropping, insider’s tale of wholesale incompetence, recklessness and venality. Based on over 200 hours of footage, the film provides a candid retelling of the events following the fall of Baghdad in 2003 by high ranking officials, Iraqi civilians, American soldiers, and prominent analysts. “No End In Sight” examines the manner in which the principal errors of U.S. policy — the use of insufficient troop levels, allowing the looting of Baghdad, the purging of professionals from the Iraqi government, and the disbanding of the Iraqi military — largely created the insurgency and chaos that engulf Iraq today.