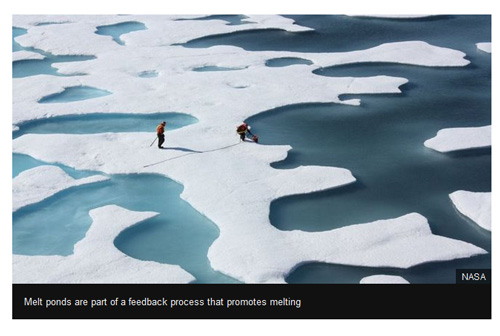 The floes have experienced much reduced winter coverage and go into the warmest months tracking below the all time satellite minimum year of 2012.

But the Reading team says current ice extent is actually a poor guide to the scale of the eventual September low point.

A better correlation is with the fraction of the floes in May topped with melt ponds – and that metric suggests 2016 will not be a record year.

Ponding water accelerates melting by changing the reflectivity, or albedo, of white ice. The darker liquid absorbs more energy from the sun, promoting further melting and a larger fraction of standing water… and so on.

However, despite some remarkable conditions during the Arctic winter, this feedback process has not become a dominant factor in the right places and at the right time to really suppress sea ice in the coming weeks, contends Dr David Schroeder from the Nerc Centre for Polar Observation and Modelling (CPOM).

“2016 certainly looks to be an interesting year when you consider how low the extent has been through the winter, together with the strong sea-surface temperature anomalies. But the winter months are not when melt ponds start forming; this happens in the second half of May and the beginning of June. And during this period, although there were still positive anomalies in some locations, in the most important areas for melt pond fraction – such as in the east Siberian sea towards the central Arctic, for example – the temperatures were not very high.”