Noam Chomsky: Crises and the Unipolar Moment talking at SOAS, University of London

Noam Chomsky: Crises and the Unipolar Moment talking at SOAS, University of London

How shareholders jumped to first in line for profits

Milton Friedman, one of the most influential economists of the 20th century. – PBS

The big change began with a professor. At the University of Chicago, economist Milton Friedman (who would later win the Nobel Prize) wrote this in the New York Times Magazine in 1970:

“There is one and only one social responsibility of business — to use its resources and engage in activities designed to increase its profits.”

Profits for whom? For shareholders, Friedman wrote.

“Some called it slumpflation,” said Rick Wartzman of the Drucker Institute and author of the upcoming book “The End of Loyalty.” “’Inflump’ was another one that circulated. But most famously it was stagflation.’”This

was a new idea that began to take root. Throughout the decade of the ’70s, the old postwar business model was crumbling under pressure from inflation and weak growth.

The downturn exposed American companies as uncompetitive in an increasingly global environment.

“Many companies had gotten fat and lazy during the ‘golden age of American business,'” Wartzman said. “We just didn’t see the seams starting to come apart until the late ’60s and early ’70s.”

Climate Ready Boston is an initiative to develop resilient solutions which will prepare our city for climate change. It has three main elements, which will also be summarized in a final report:

The Niger Delta Avengers, a militant group that has carried out attacks on oil facilities in Nigeria’s southern oil region, said it would only negotiate with the government if independent foreign mediators were involved. Last week the group rejected an offer from the government to hold talks. Attacks in the southern swampland have pushed oil production to a 20-year low in what was until recently Africa’s biggest oil producing nation. Its production has fallen behind Angola in the last few weeks. On Sunday, the Movement for the Emancipation of the Niger Delta, one of the region’s largest militant groups until it signed up for a government amnesty in 2009, urged the Avengers to take part in negotiations.

Noam Chomsky: The Republican Party Is Becoming a Real Danger to Human Survival 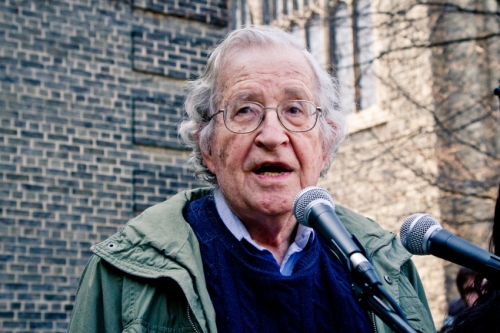 Nuclear weapons, climate change, and the prospects for survival.

Prospects for decent long-term survival are not high unless there is a significant change of course.

This piece first appeared in TomDispatch. It is excerpted from Noam Chomsky’s new book, Who Rules the World? (Metropolitan Books).

In January 2015, the Bulletin of the Atomic Scientists advanced its famous Doomsday Clock to three minutes before midnight, a threat level that had not been reached for 30 years. The Bulletin’s statement explaining this advance toward catastrophe invoked the two major threats to survival: nuclear weapons and “unchecked climate change.” The call condemned world leaders, who “have failed to act with the speed or on the scale required to protect citizens from potential catastrophe,” endangering “every person on Earth [by] failing to perform their most important duty—ensuring and preserving the health and vitality of human civilization.”

Since then, there has been good reason to consider moving the hands even closer to doomsday.

As 2015 ended, world leaders met in Paris to address the severe problem of “unchecked climate change.” Hardly a day passes without new evidence of how severe the crisis is. To pick almost at random, shortly before the opening of the Paris conference, NASA’s Jet Propulsion Lab released a study that both surprised and alarmed scientists who have been studying Arctic ice. The study showed that a huge Greenland glacier, Zachariae Isstrom, “broke loose from a glaciologically stable position in 2012 and entered a phase of accelerated retreat,” an unexpected and ominous development. The glacier “holds enough water to raise global sea level by more than 18 inches (46 centimeters) if it were to melt completely. And now it’s on a crash diet, losing 5 billion tons of mass every year. All that ice is crumbling into the North Atlantic Ocean.”

Yet there was little expectation that world leaders in Paris would “act with the speed or on the scale required to protect citizens from potential catastrophe.” And even if by some miracle they had, it would have been of limited value, for reasons that should be deeply disturbing.

When the agreement was approved in Paris, French Foreign Minister Laurent Fabius, who hosted the talks, announced that it is “legally binding.” That may be the hope, but there are more than a few obstacles that are worthy of careful attention.

Study: CO2 in Atmosphere to Remain Above Threshold of 400 PPM

In another climate milestone, a study projects levels of carbon dioxide in the atmosphere will smash the threshold of 400 parts per million this year and not fall below it again in our lifetimes. The 400-parts-per-million threshold has been an important marker in U.N. climate negotiations, widely recognized as a dangerous level that could drastically worsen global warming. The environmentalist group 350.org takes its name after the 350-parts-per-million threshold that scientists say is the maximum atmospheric concentration of carbon dioxide for a safe planet. 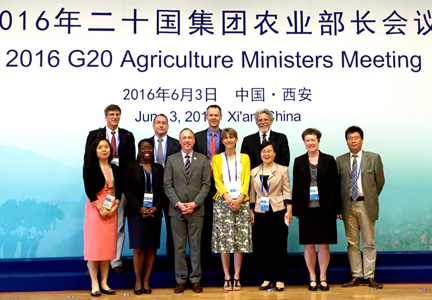 WASHINGTON, D.C., U.S. — U.S. Deputy Under Secretary for Farm and Foreign Agricultural Services Jonathan Cordone led the U.S. Department of Agriculture’s (USDA) delegation to the G-20 Agricultural Ministers Meeting in Xi’an, China, June 3. The theme of the gathering was agricultural innovation, which, as Cordone said in his address to the group, is key to meeting the daunting challenge of feeding a global population that is expected to reach 9.7 billion by the year 2050.

Cordone told top agricultural officials from the G-20 member countries that the tools needed to meet this challenge include compatible regulatory systems, an openness to sharing data, and innovative approaches to addressing changing climate and reducing food waste.

“Regulatory systems that are based on science are more effective,” Cordone said. “We cannot afford for decisions to be based solely on public opinion and political expediency. And regulatory systems that are globally compatible are necessary in an age of international trade and interdependency. We cannot let short-term interests impede our long-term global food security.”

Dairy cows stand in a barn at the Wolters dairy farm on May 19, 2016 in Bandelow, Germany. Greenhouse gas emissions from agriculture need to be dramatically cut to achieve global climate change goals. For example, recently developed methane inhibitors would reduce dairy cow emissions by 30 percent without affecting milk yields.

Although 177 countries signed the Paris Agreement to reduce global greenhouse gas (GHG) emissions in April 2016, the reductions they have pledged so far are not enough. To stand a chance of limiting warming to 2 degrees Celsius above preindustrial levels by the century’s end, we need to get more specific about the reductions that sectors need to make.

Agriculture directly accounts for 10 to 12 percent of anthropogenic greenhouse gas emissions. We know that even if the industrial, transport and energy sectors all take action, it will be impossible to meet the 2 degrees Celsius limit without addressing the emissions in agriculture.

The good news is that an overwhelming majority of countries—119 in total—have pledged to reduce their agriculture-related emissions as part of the Paris process; however, until now, we have had no means to evaluate these plans to understand whether the pledges are enough.

To meet this challenge, a team of scientists calculated the reduction needed in agricultural GHG emissions to meet the global 2 degrees Celsius target. The study was conducted by the CGIAR Research Program on Climate Change, Agriculture and Food Security (CCAFS), a global research consortium, and partners.

Citigroup, Deutsche Bank and JPMorgan Chase have delivered billions of dollars in financing for coal, oil and gas companies that is “deeply at odds” with the goals of the Paris climate change accord, according to a study.

The banks rank among the top North American and European private sector backers of coal mines, coal power plants and costly oil and gas ventures over the past three years, according to the report by environmental campaign groups the US Sierra Club, the Rainforest Action Network, BankTrack and Oil Change International.

Deutsche Bank was the top financer of big coal miners, delivering nearly $7bn between 2013 and 2015, according to the study’s assessment of publicly available financial filings.

Citigroup was calculated to have supplied $24bn for large coal power plant operators, making it the largest supporter in this category.

JPMorgan Chase was ranked the largest financer of so-called “extreme oil”, financing an estimated $38bn for the biggest owners of untapped reserves in ultra-deep offshore fields, the Arctic or tar sands.