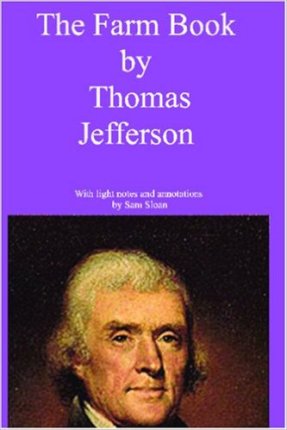 The Farm Book is the primary source for all studies about Thomas Jefferson and his slaves. It is a notebook kept and maintained by Thomas Jefferson from 1774 until just before his death in 1826. Unlike his letters and correspondence which Thomas Jefferson clearly intended to be kept for posterity, the Farm Book contains his private notes that he probably never imagined would be scrutinized and studied by future generations. The “Farm Book” derives its name from those two words that were written on the inside cover. The Farm Book starts with the genealogy of his favorite horse, Caractacus. It then moves on to the first inventory of the Slaves of Thomas Jefferson: “A Roll of the proper slaves of Thomas Jefferson, Jan. 14. 1774.” There are 29 slaves listed here.

However, putting that aside, a little appreciated fact is that the majority of slaves of Thomas Jefferson were not at Monticello but were at Poplar Forest, in what is now Lynchburg, Virginia. After Thomas Jefferson died in 1826, the slaves at Monticello were sold at auction and were widely disbursed, with the exceptions only of Sally Hemings and her two remaining sons. This was because the land around Monticello was not suitable for cultivation. However, the slaves at Poplar Forest, where the best farmland was, stayed right where they were. Their descendants are still there today, where they attend Jefferson Forest High School. The Farm Book, which groups slaves by their slave families, with husband, wife and children grouped together, needs to be studied in detail by anybody interested in the genealogy of these slave families.