The highest court in Massachusetts has dealt a victory to four teenage plaintiffs in a lawsuit over climate change. In a case brought by the teenagers and environmental groups, the state Supreme Court found Massachusetts failed to fulfill its legal obligations to reduce greenhouse gas emissions that are warming the planet. In a statement, 17-year-old plaintiff Shamus Miller called the ruling a “historic victory for young generations advocating for changes to be made by the government. The global climate change crisis is a threat to the well being of humanity, and to my generation, that has been ignored for too long.”

Measuring food insecurity: how the FIES Scale was born. Bringing the numbers to life. Short version

Food and Agriculture Organization of the United Nations
Published on May 19, 2016
http://www.fao.org/in-action/voices-o…

The Sustainable Development Agenda includes an ambitious goal to eradicate hunger by 2030. But how is hunger measured? Learn about a new tool called the Food Insecurity Experience Scale.

Full Version of the video: https://youtu.be/cVnbjabLs80

Giana Amador on Food and Agriculture in Today’s Society

Giana Amador, Research Analyst at the Center for Carbon Removal, discusses finding ways to empower communities through food versus “turning [people] off from the idea that they should be changing at all.”

Richard Heinberg speaks on his newest book, covering the short-term nature of the recent North American oil boom and the financial bubble that supports it. Heinberg covers the implications of the 2016-2017 peak in unconventional output by providing essential information for any community facing the false promises of companies planning to extract reality

Richard Heinberg is a Senior Fellow of the Post Carbon Institute and is widely regarded as one of the world’s foremost Peak Oil educators. This is his plenary talk at the Economics of Happiness conference, held in Portland, Oregon, in February 2015. The conference was organized by Local Futures, a non-profit organization that has been promoting a shift from global to local for nearly 40 years. For more information about the conference or Local Futures’ work, go to www.localfutures.org

Pulled from the archives at the Chadwick Garden, UCSC

Alan Chadwick: A Gardener of Souls 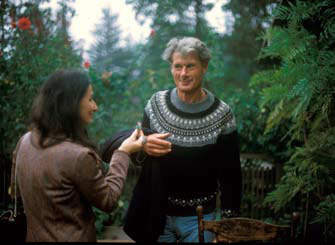 E.F. Schumacher, author of Small is Beautiful, called Alan Chadwick “the greatest horticulturist of the 20th century.” Using the Biodynamic French Intensive Method, which he developed, Alan led the movement that pioneered organic gardening and farming in North America. But Alan Chadwick was far more than an accomplished horticulturist. He taught, prodded, cajoled, and berated his many students until they became competent, authentic, and creative human beings; or at least that was his goal for them, as he would settle for nothing less. As Allen Kalpin, a long-time Chadwick apprentice, once said, “He was a gardener of souls.”