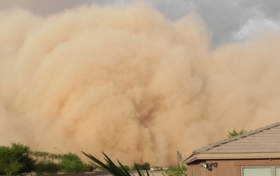 Among other evils, dust storms stripf away essential soil microorganisms Credit: Photo by Roxy Lopez via Wikimedia Commons under CC BY-SA 3.0 and GFDL

Around the globe, 2016 has been a dusty year. Just this month, massive dust storms enveloped Guazhou County in China, engulfing five-story buildings. Dust storms in Kuwait suspended oil exports, while another storm engulfed the Texas Panhandle. In January, red clouds of dust swept across Free State, South Africa, while scientists warned that the erosion of nutrient-rich topsoil threatened food security.

But the loss of soil also presents a less obvious challenge: it robs us of a key ally in fighting climate change. That ally is soil microbes.

Global soils already hold three times as much carbon as exists in the atmosphere, and there’s room for much more. According to a recent study in Nature, enhanced carbon storage in the world’s farmland soils could reduce greenhouse gas concentrations by between 50 and 80 percent.

America’s greatest minds in the field of space exploration are touching down in Washington, DC for the Humans to Mars summit, outlining the international community’s latest efforts towards a manned mission to the Red Planet. RT America’s Manuel Rapalo went to the summit, and spoke with space experts and aspiring astronauts. 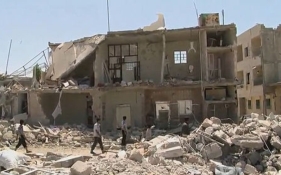 Climate change can make storms stronger, cold spells longer and water supplies drier. But can it cause war? A new study published today in Proceedings of the National Academy of Sciences says drought in Syria, exacerbated to record levels by global warming, pushed social unrest in that nation across a line into an open uprising in 2011. The conflict has since become a major civil war with international involvement.

Drying and drought in Syria from 2006 to 2011—the worst on record there—destroyed agriculture, causing many farm families to migrate to cities. The influx added to social stresses already created by refugees pouring in from the war in Iraq, explains Richard Seager, a climate scientist at Columbia University’s Lamont-Doherty Earth Observatory who co-authored the study. The drought also pushed up food prices, aggravating poverty. “We’re not saying the drought caused the war,” Seager said. “We’re saying that added to all the other stressors, it helped kick things over the threshold into open conflict. And a drought of that severity was made much more likely by the ongoing human-driven drying of that region.”

Seager added that the entire Middle East “faces a drier, hotter climate due to climate change. This will stress water resources and agriculture, and will likely further increase risk of conflict.” Global warming is desiccating the region in two ways: higher temperatures that increase evaporation in already parched soils, and weaker winds that bring less rain from the Mediterranean Sea during the wet season (November to April).

A number of research efforts in recent years have suggested that warmer temperatures and drought increase the risk of violent conflict around the world. A 2009 study found that over the past 30 years in sub-Saharan Africa, temperature rise correlated with an increase in the likelihood of civil war. A 2011 study implicated climate change in pushing up food prices in Egypt, fueling revolution there.

Trouble related to drought in the Middle East may get worse. The United Nations Intergovernmental Panel on Climate Change has predicted that human effects on climate change will make the area drier than it would have become without the manmade influences.

The U.S. Defense Department is taking the warning seriously. It issued a report last November declaring climate change a “threat multiplier” that will impact national security. When Scientific American asked Seager if his group’s research supports that point of view he said, “Yes. It does. Climate change is very much a cause of concern for national, regional and international security and this study makes clear how that can work. The Syrian war has now taken on a life of its own…however, a drought made worse by climate change was one important factor that initiated the social unraveling.”

Colin Kelley, a climatologist at the University of California, Santa Barbara, who led the work while finishing his doctorate at Lamont-Doherty, concurred, but was also careful to state that severe droughts can have a catalytic effect and contribute to, but not cause, civil unrest.

Although snowstorms and rising sea levels garner more of the headlines about extreme weather driven by climate change, drought is quickly rising as the most troublesome, near-term impact. Another paper in PNAS suggests links between global warming and the terrible, ongoing drought in California. Although civil unrest is far less likely there, tension is indeed growing between political leaders in northern and southern California over who gets the increasingly scarce water from rivers, underground aquifers and snow melt, all of which are declining. 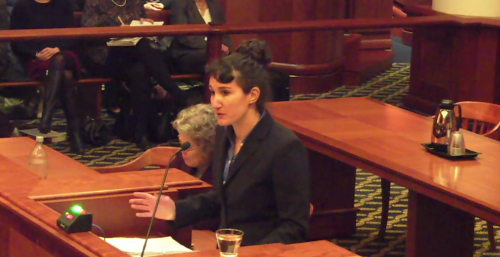 “This is a historic day,” said Jenny Rushlow, CLF’s lead attorney on the case. “Today our highest court declared clearly and unequivocally that our leaders can no longer sit on their hands while Massachusetts communities are put at risk from the effects of climate change. Thanks to this landmark decision, our role as a national leader in battling climate change has only been stalled but not sacrificed. Now, with action from DEP, we can get back on track and ensure that the health of our families and future generations is always a top priority.”

In the opinion, Justice Cordy wrote that “the purpose of [the Global Warming Solutions Act] is to attain actual, measurable, and permanent emission reductions in the Commonwealth, and the Legislature included [the
relevant section] in the statute to ensure that legally mandated reductions are realized by the 2020 deadline.” Justice Cordy also wrote that the relevant section of the Global Warming Solutions Act is “unambiguous” and “requires the department to promulgate regulations that establish volumetric limits on multiple greenhouse gas emissions sources…[that] must decline on an annual basis.”

Eugenia Gibbons, Clean Energy Program Director at Massachusetts Energy Consumer Alliance, commented, “With this decision, the administration can now get down to business, reducing greenhouse gas emissions in very specific ways. As a consumer group, we’re confident that the next steps taken will be cost-effective and transparent.”

The plaintiffs in this case were represented by CLF, Columbia Environmental Law Clinic, and Sugarman, Rogers, Barshak & Cohen, P.C.

Experts are available for further comment. The Supreme Judicial Court’s decision can be read here.

Clip from Bookchin’s ‘Advanced Concepts 2’ lecture. Murray puts fourth the proposal that human’s dominating attitudes towards nature stems from the nature of the social system people are embedded in.