Protests against the oil, gas and coal industries erupted across multiple continents over the weekend as part of the global campaign to “break free from fossil fuels.” In Washington state, 52 people were arrested after blockading railroad tracks leading to two oil refineries. Protesters pitched their tents on the tracks and occupied the BNSF Railway tracks from Friday afternoon until police broke up the encampment early Sunday. Ahmed Gaya spoke out on Saturday.

Ahmed Gaya: “This has been one of the most inspiring things I’ve ever been a part of in my life, I have to say. We need to break the grip of fossil fuels on our economy. World leaders agree that to have a stable climate we need to limit temperatures to 1.5 degrees Celsius. There is no current plan anywhere in the world to do that. The only thing that has been proven time and time again to bring about rapid and massive social change are mass disobedient movements.”

Meanwhile, hundreds of “kayaktivists” took to the waters around the Shell and Tesoro refineries. They displayed a banner in front of the refineries that read “Transition Together.” Liz Lafferty spoke out about why she decided to take to the waters.

Liz Lafferty: “I’m here today because for the last hundred years we’ve been spending our children’s children’s resources. And it’s been an insane act on our part to take resources that really belong to future generations, and spend them as if we can replace them, because they’re irreplaceable resources. So I’m out here. And the other reason I’m out here is because for democracy to work, you have to have an informed populace. And we’ve been asleep, I’ve been asleep, for too long.”

Meanwhile, across the country from Washington state, in upstate New York, thousands of people converged on the Port of Albany to protest shipments of explosive crude oil by rail in so-called bomb trains. The trains pass just yards behind the Ezra Prentice public housing complex in the New York state capital. Albany Councilmember Vivian Kornegay spoke about the action.

Vivian Kornegay: “People have come to us from Vermont, Massachusetts, Connecticut, even Maryland, to be one unified voice with this small community. And small communities across the country are getting together to make one unified voice and have that one unified voice heard from where we are today, here in Albany, or wherever else these protests are happening, to the White House, to let them know that small communities are impacted and affected, and we are not going to go away until you hear from us and hear that we want and deserve to have safe communities. We deserve to be able to breathe clean air, drink clean water and have our children be safe and free from the backdrop of an oil train when they play in the playground.”

As part of the actions in Albany Saturday, many protesters sat down on the train tracks and occupied them for hours. In the early afternoon, two climbers suspended themselves from a railroad bridge, blockading a train from North Dakota carrying crude oil. At least five people were arrested, including the two climbers—Marisa Shea and Maeve McBride. McBride described their action.

Maeve McBride: “Marisa and I and another team of folks were able to drop a line over a railroad bridge this afternoon and stop mainline traffic and an oil train that was heading from essentially western New York down. We just got our arraignment, and the last thing the judge said to us when we left was ‘Thanks for coming out.'”

Germany: More Than 100 Arrested at Coal Protest Amid Global Wave of Actions

Protests against fossil fuels and the impacts of climate change were also held over the weekend from New Zealand to South Africa; from Nigeria, where residents demanded a cleanup of the Niger Delta, to Brazil; from Turkey to Denver, Colorado, to Ecuador, where participants planted trees on a future oil refinery site to protest drilling in Yasuní National Park. Demonstrators converged in Los Angeles; Vancouver, Canada; West Java, Indonesia, where they dropped banners from machinery used to unload coal; Chicago; and Washington, D.C. In Germany, more than 100 people were arrested after thousands gathered to shut down one of Europe’s largest lignite coal mines for two days. The protesters blocked rail access and made their way onto the grounds of a coal-fired power station.

Shell Spills 90,000 Gallons of Oil into Gulf of Mexico 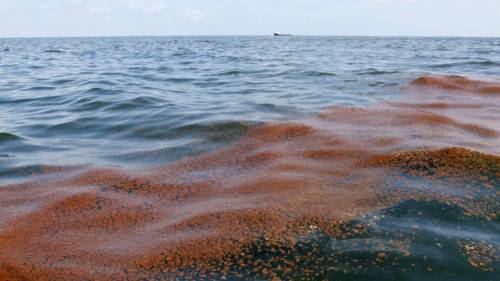 In another reminder of the fossil fuel industry’s impact, a Shell oil facility spilled about 90,000 gallons of crude oil into the Gulf of Mexico off the coast of Louisiana. Authorities say the spill has been contained and cleanup is underway.

Last Month was the Hottest April Ever—by a Record Margin

And in the latest sign of human-induced climate change driven by the fossil fuel industry, last month marked the hottest April on record worldwide, crushing the previous high by the widest margin to date. It was the seventh month in a row to break global temperature records.