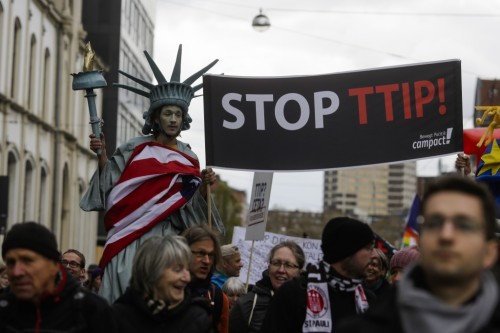 By now, most in the environmental community know that there are major environmental and climate change concerns surrounding the Trans-Pacific Partnership (TPP) — that it could empower corporations to sue governments over environmental decisions and policies, for instance. But another trade deal, one being forged between the United States and European Union, has gotten less attention — until now.

On Monday, Greenpeace Netherlands leaked documents from negotiations surrounding the Transatlantic Trade and Investment Partnership (TTIP). The 248 pages of documents — which account for about a third of the total text — illustrate four major environmental concerns, Greenpeace says.

First, “nothing indicating climate protection can be found in the obtained texts.” Second, the trade agreement would put the “precautionary principle,” which is generally used in the E.U., in jeopardy. Under the precautionary principle, actions or products that could have a negative impact on the environment or people’s health are guilty until proven innocent — that is, the action or product must be proven to be not harmful. In the United States, the more common approach is to wait until there’s a full scientific consensus — or at least close to one — that something is harmful before action is taken.

“The precautionary principle, enshrined in the E.U. Treaty, is not mentioned in the chapter on Regulatory Cooperation, nor in any other of the obtained 12 chapters,” Greenpeace notes. “On the other hand the U.S. demand for a ‘risk based’ approach that aims to manage hazardous substances rather than avoid them, finds its way into various chapters. This approach undermines the ability of regulators to take preventive measures, for example regarding controversial substances like hormone disrupting chemicals.”

40 environmental groups have signed a letter urging Congress to reject the TransPacific Partnership.

It’s something that all the major presidential candidates — on both sides of the aisle — can agree on: The United States should not ratify the TransPacific Partnership trade agreement. Even Hillary Clinton, who was Secretary of State during the bulk of the agreement’s confidential negotiations, doesn’t think the TPP is a good idea anymore.

Now, a group of environmental advocates is pressuring Congress to reject ratification of the 12-nation agreement, which they say would allow 9,000 companies operating on U.S. soil to sue the government for imposing environmental regulations.

Under the agreement’s investor-state dispute settlement clause, corporations can sue states for thwarting economic expectations. The clause, known as ISDS, allows companies to file claims for damages or lost revenue incurred by rejected permits or a changed regulatory landscape. The claims are heard by three-member tribunals, often made up of corporate lawyers, that operate independently.

Handing foreign companies equal — or even slightly advantageous — ground against the U.S. government, in an extra-judicial tribunal system, is not as far-fetched as it sounds. TransCanada, the company that tried to build the Keystone XL pipeline, represents just one example of how the TPP would work. The company has filed a claim under NAFTA for $15 billion in damages, alleging that U.S. denial of the permit was “arbitrary and unjustified.”

The Keystone suit is really the tip of the iceberg in terms of what we could see if TPP were to pass through Congress.

“For years, environmental and environmental justice groups have been warning against the threat of the TPP,” Ilana Solomon, director of the Sierra Club’s Responsible Trade Program, told ThinkProgress. The Keystone suit is “really the tip of the iceberg in terms of what we could see if TPP were to pass through Congress.”

WASHINGTON, D.C. – The Trans-Pacific Partnership (TPP) has become a divisive issue in the nation’s capital, and criticism intensified after 161 food, farm, faith and rural organizations sent a letter to Capitol Hill last week, urging lawmakers to reject the trade pact.

“The main beneficiaries of the TPP are the companies that buy, process and ship raw agricultural commodities, not the farmers who face real risks from rising import competition. TPP imports will compete against U.S. farmers who are facing declining farm prices that are projected to stay low for years,” the organizations wrote.

The White House has promoted the TPP as an export-boon for farmers to generate support for the agreement, but past trade agreements have not always delivered on export promises, the letter noted. For example, the United States’ total combined exports of corn, soybeans and wheat have remained steady at about 100 million metric tons for the last 30 years despite a raft of free trade agreements since the mid-1990s.

“Trade deals do not just add new export markets – the flow of trade goes both ways – and the U.S. has committed to allowing significantly greater market access to imports under the TPP,” the groups explained. Especially “alarming” to the organizations is the agreement’s complete lack of enforceable provisions against currency manipulation, a substantial cause of America’s debilitating $531 billion trade imbalance.

Gates has positioned himself as a major player and spokesman in this arena with his “Breakthrough Energy Coalition,” a $2 billion effort he is spearheading to research and develop breakthrough “energy miracles.” That means his confused — and often simply wrong — pronouncements could have serious consequences in the public debate and are worth exploring in detail.

Gates’ latest bizarre position, as one media headline explained, is to dismiss a carbon tax — “Bill Gates: Carbon tax not right for the US.”

This is based on an extended interview that Gates did with the magazine Technology Review (TR), which may be his most revealing set of comments to date. When TR naturally asked about Gates whether a price on carbon is needed “to help create a business rationale for investing more in clean technologies?” and “Do you favor a clean, transparent tax?” he replied:

Some countries will do a pure carbon tax, and there’s a certain beauty to doing it that way, but the consensus that I think people will reach here in the U.S. will be to focus more on supply side.

What Gates is saying is that he believes the consensus that Americans will reach is to focus policy more on funding basic research and creating startup companies than on policies to boost demand — what are typically called deployment programs. This is just a restatement of Gates’ view that existing technology is not up to the job and that we need a bunch of energy miracles. That view has no basis in fact (as I’ve explained at length here and here), which is why there is zero chance American policy will focus more on energy miracles than energy deployment.

As I discussed in debunking the recent similarly confused Foreign Affairs piece, we have dawdled for so long on serious climate action that we must rapidly slash CO2 emissions, which requires over 100 times more money be spent on deployment (demand) than R&D into breakthrough technologies (supply). A carbon tax would be a big help in achieving rapid CO2 cuts.

Thousands of gallons of radioactive waste are estimated to have leaked at a Manhattan Project-era nuclear storage tank in Washington State over the weekend, triggering an alarm and causing one former worker to label it as “catastrophic.” This comes as 20 workers were sent for medical evaluations after inhaling chemical vapors in the vicinity of a leaking nuclear waste tank which was being transferred. RT America’s Alexey Yaroshevsky reports from the site.

TTIP: It takes ‘digging and digging’ to find true intent of US & EU – Ac tivist

Scott Paul, President of the Alliance for American Manufacturing, joins ‘News With Ed’ to talk about the looming Transatlantic Trade and Investment Partnership, or TTIP, which experts characterize as a ‘race to the bottom’ to find emerging markets with cheap labor to outsource to.

“His World Was Always Filled with Such Beauty”: Frida Berrigan on Her Uncle, Priest Daniel Berrigan

http://democracynow.org – As we remember the life and legacy of Father Daniel Berrigan, who died on Saturday at the age of 94, his niece Frida Berrigan reflects on the impact his activism had on her family and her own life. Frida is a longtime peace activist herself. She also writes a regular column for Waging Nonviolence. She recalls the intimate side of growing up among Father Dan, whose walls were always filled with art and who loved the late-night conversations among fellow organizers and family members. She says the community he cultivated “gave me a sense that anything is possible and that if we act in conscience, if we act together, if we are moved, we can accomplish extraordinary things.”

Should Dole Get the Corporate Death Penalty?

Thom Hartmann asks at what point do we start killing corporations that have been found guilty of wrongdoing in the United States?

Climate change is a stark reminder of our thoroughgoing interconnectedness. Ven. Bhikkhu Bodhi and Dr. Julie A. Nelson explore Buddhist resources that can help us to care for the earth and all of its inhabitants, and how these resources can be brought to bear in the most effective ways.