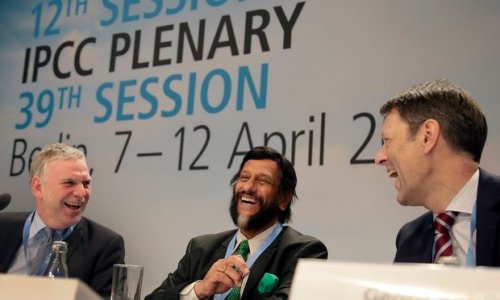 The economic models that are used to inform climate policy currently contain an unhealthy dose of wishful thinking. Technologies that remove carbon dioxide from the air are assumed in the models that avoid dangerous climate change – but such technologies do not yet exist and it is unclear whether they could be deployed at a meaningful scale.

The scenarios modelled for the IPCC’s Fifth Assessment Report assume the large-scale deployment of technologies that achieve negative emissions that draw down carbon dioxide from the atmosphere and permanently store it. But whether such proposed methods could be deployed at a material scale is unproven. It would be more prudent to exclude these techniques from mitigation scenarios used by the IPCC, unless and until we have sufficient evidence of their availability and viability to support their inclusion.

Most of the modelled emissions pathways limiting warming to 2 °C (and all the ones that restrict the rise to 1.5 °C) require massive deployment of Biomass Energy with Carbon Capture and Storage (BECCS). This involves growing biomass which is used to generate power and geologically sequestering the carbon dioxide produced. While the constituent steps of this process have been demonstrated, there are but a few, small, examples of the combined process. To rely on this technique to deliver us from climate change is to demonstrate a degree of faith that is out of keeping with scientific rigour.

There is a distinct lack of evidence to determine whether BECCS is technically feasible, economically affordable, environmentally benign, socially acceptable and politically viable at a material scale. Technically, there are serious doubts about the ability to sequester the vast quantities of carbon dioxide that are implied in the models. Economically, without a substantial carbon price, the costs would be much higher than competing power-generation technologies. Environmentally, growing such volumes of biomass would have profound effects on biodiversity. Socially, the use of land for BECCS would restrict agriculture – contributing to substantial increases in food prices; while politically, the issue seems so toxic that the Paris Agreement carefully avoided mentioning negative emissions at all. Such impacts would not be material were BECCS to be deployed at a small scale, but the economic scenarios consistent with 1.5 °C (or even 2°C) assume that BECCS is deployed at a truly gargantuan scale, at which these adverse impacts would indeed be material.

For a technology to be deployable it needs not only to work, but also to possess a social licence to operate. For example, that Germany possesses the technical ability and financial means to build new nuclear power plants is not in question, but lacking the social and political will to do so makes the point moot.