Can Oil Companies Save the World from Global Warming? – Scientific American 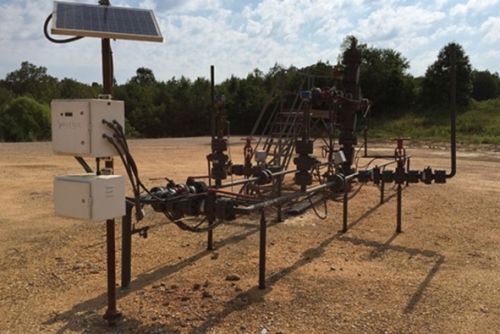 Oil firms might pay to use CO2 emissions from power plants, but low petroleum prices could doom the effort

RALEIGH, Miss.—Kevin Macumber wanted to be a forester. Today he manages about 4,000 acres of longleaf pine in Mississippi—not for the timber, but for what lies far beneath the woods. It’s black gold: oil, deep underground. And the key to getting it out is the same molecule that lets all those trees grow: carbon dioxide.

“Another day in paradise,” says Macumber as we meet at a Chevron gas station in southeastern Mississippi, about the closest thing to a landmark around here. We’re headed to the old trailer home that’s become the operational headquarters for Tellus Operating Group, a wildcat oil company with some old oil fields in this neck of the woods. I follow his black Chevy pickup down country byways until we finally turn off on a dirt road that winds through forests to the company trailer, where the coffee is fresh and Macumber can banter with a few of his workers on this warm sunny day.

The secret about old oil reservoirs below the surface is that they still have oil, sometimes a lot, but it no longer comes out easily. Companies can pump large volumes of CO2, piped in from natural deposits belowground, down into the wells, forcing out the oil that would otherwise stay put. Macumber used to work at Occidental, one of the large oil companies that helped pioneer this “enhanced oil recovery” technique in Texas. But now he’s helped found Tellus—named after one of the Roman Earth goddesses—to do the same thing in Mississippi.

Right now, Tellus gets its CO2 from a deposit called the Jackson Dome in western Mississippi, and other oil companies are using a similar approach at hundreds of old wells around the country. But Tellus is one of two U.S. oil companies that hopes to try something entirely new, any day now. Instead of piping in natural CO2, it will use the greenhouse gas captured at a coal-fired power plant just completed nearly 100 miles north of here and send it down into the reservoir, pushing oil out and leaving the greenhouse gas deep below, safely locked away from the atmosphere, so it does not add to global warming.