Taxpayers footing most of the BP oil spill bill

Six years ago, the Deepwater Horizon oil rig exploded in the Gulf of Mexico, killing 11 people and dumping nearly 5 million barrels of oil into the ocean. Last October, the US Justice Department announced a multi-billion dollar settlement with BP over the disaster. But who is paying for it? Taxpayers, mostly, as RT America’s Anya Parampil reports.

Should we pay reparations for slavery? (The Big Questions, 23/3/14)

Watch Dr Shashi Tharoor says Britain to pay reparations to India India’s share of the world economy when Britain arrived on it shores was 23 per cent. By the time the British left it was down to below four per cent.

Afshin speaks to leading Indian MP and former UN Under-Secretary-General Shashi Tharoor about 200 years of colonial exploitation and increasing tension between India and Pakistan after the last terrorist attack.

The motion: This house believes Britain owes reparations to her former colonies.

ABOUT THE OXFORD UNION SOCIETY: The Union is the world’s most prestigious debating society, with an unparalleled reputation for bringing international guests and speakers to Oxford. It has been established for 189 years, aiming to promote debate and discussion not just in Oxford University, but across the globe. 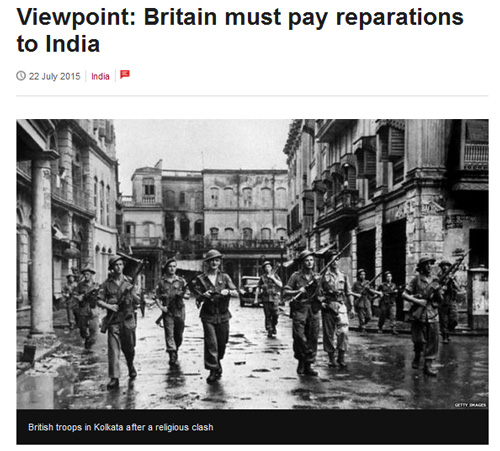 At the end of May, the Oxford Union held a debate on the motion “This house believes Britain owes reparations to her former colonies”. Speakers included former Conservative MP Sir Richard Ottaway, Indian politician and writer Shashi Tharoor and British historian John Mackenzie. Shashi Tharoor’s argument in support of the motion, went viral in India after he tweeted it out from his personal account. The argument has found favour among Indians, where the subject of colonial exploitation remains a sore topic. Here he gives a summary of his views:

At the beginning of the 18th Century, India’s share of the world economy was 23%, as large as all of Europe put together. By the time the British departed India, it had dropped to less than 4%.

The reason was simple: India was governed for the benefit of Britain. Britain’s rise for 200 years was financed by its depredations in India.

By the end of the 19th Century, India was Britain’s biggest cash-cow, the world’s biggest purchaser of British exports and the source of highly paid employment for British civil servants – all at India’s own expense. We literally paid for our own oppression.

Britain’s Industrial Revolution was built on the de-industrialisation of India – the destruction of Indian textiles and their replacement by manufacturing in England, using Indian raw material and exporting the finished products back to India and the rest of the world.

The handloom weavers of Bengal had produced and exported some of the world’s most desirable fabrics, especially cheap but fine muslins, some light as “woven air”.

Britain’s response was to cut off the thumbs of Bengali weavers, break their looms and impose duties and tariffs on Indian cloth, while flooding India and the world with cheaper fabric from the new satanic steam mills of Britain.

Weavers became beggars, manufacturing collapsed; the population of Dhaka, which was once the great centre of muslin production, fell by 90%.

So instead of a great exporter of finished products, India became an importer of British ones, while its share of world exports fell from 27% to 2%.

BBC World Service – Newshour Extra, Should Britain Be Ashamed Of Its Colonial Past? 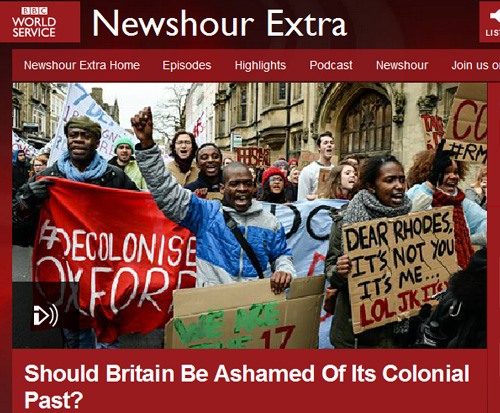 This week, Owen Bennett Jones and guests are at the Oxford Literary Festival.

Across the world student bodies have been have been asking universities to distance themselves from historical symbols of oppression. In Oxford, the protests took the form of the ‘Rhodes Must Fall’ campaign which began in South Africa and targeted statues of Cecil Rhodes – a committed champion of the British Empire. How representative are these protests of current sentiments in Britain and its former colonies? So how Britain should acknowledge this part of its identity? Should it apologise and pay reparations, or embrace its history with pride?

Join us for the opening plenary of the Next System Project’s NYC Convening (http://nyc.thenextsystem.org/).

We’re kicking off 2 days of panels and workshops with a conversation featuring brilliant and bold practitioners and thinkers exploring the question: if the current system isn’t working, then what comes next?

This plenary opened the the Next System Project’s NYC Convening March 10-12, 2016. For more information on the convening, visit www.nyc.thenextsystem.org.