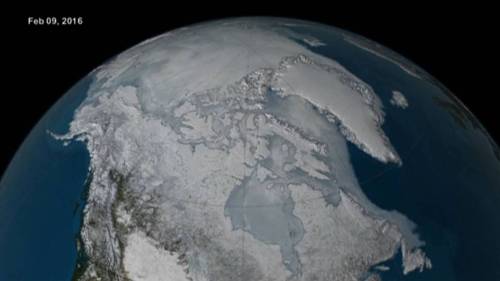 A record swath of Arctic sea ice failed to freeze over the winter amid record-shattering heat. The National Snow and Ice Data Center said the sea ice’s maximum expanse this winter was the lowest since record keeping began nearly 40 years ago. This comes after NASA announced two new missions to explore the disappearing sea ice in the Arctic. NASA scientist Walt Meier described the problem.

Report: 7 Million in U.S. at Risk of Human-Induced Earthquakes

About 7 million people in the United States live in areas at risk of an earthquake induced by human activity. That’s according to a new report by the U.S. Geological Survey, which said states including Oklahoma and Kansas are now at as high of a risk as earthquake-prone California of a devastating earthquake. The Central United States has seen a spike in seismic activity due to the injection of wastewater from oil and gas drilling deep underground.

Published on Jan 10, 2015
Will humankind survive the century?
Stanford professor Paul Ehrlich on why he thinks there’s a 90% chance we all die off before 2065.

The master predicament that remains unaddressed

In 1968, Paul Ehrlich released his ground-breaking book The Population Bomb, which awoke the national consciousness to the collision-course world population growth is on with our planet’s finite resources. His work was reinforced several years later by the Limits To Growth report issued by the Club of Rome.

Fast-forward almost 50 years later, and Ehrlich’s book reads more like a ‘how to’ manual. Nearly all the predictions it made are coming to pass, if they haven’t already. Ehrlich admits that things are even more dire than he originally forecasted; not just from the size of the predicament, but because of the lack of social willingness and political courage to address or even acknowledge the situation.

A Montreal Protocol for fossil ammonia

A Montreal Protocol for fossil ammonia

In September 1987 twenty four countries signed the Montreal Protocol, beginning the phaseout of chlorofluorocarbons (CFCs) and other materials that destroy the ozone layer. The international community decided the impact of a small group of industrial chemicals was simply too dangerous, and outlawed them.

Perhaps it is time to drop a similar injunction on another industrial chemical with dangerous global warming impacts — ammonia. Specifically, ammonia that is produced from fossil carbon, with high CO2 emissions. Fossil ammonia.

A ban on fossil ammonia would cut CO2 emissions from that sector. But this is just a warm-up. The real intent is to drive the technological innovation we need to take on the main game — the decarbonization of energy.

and 2014 Conference at University of Massachusetts:

and PDF slides for talk:

The Road to a Climate Deal Panel: 2015 UNA-USA Members Day at the UN

Jackson Dougan, U.S. Youth Observer to the UN, Timothy C. Weiskel, Research Director, Cambridge Climate Research Associates and faculty member, Harvard University, and H.E. Mr. Tomas Christensen, Senior Advisor for Partnerships,
Executive Office of the Secretary-General, United Nations, speak on a panel at the 2015 UNA-USA Members Day Event at the UN. More than 750 UNA-USA members and UN supporters visited UN Headquarters for Members’ Day and the 7th Annual Mid-Atlantic Regional Conference, a day of dynamic and informative discussion on the most pressing issues facing the United Nations. Using the theme, The UN at 70: A Year for Bold Action, UNA-USA members got exclusive access to the UN, where they heard from experts, and network with community leaders, academics and students, and representatives from think tanks and like-minded organizations.

interesting on the planet

Man-made earthquakes, often associated with controversial oil exploration operations such as hydraulic fracturing (fracking), have put 7 million people Americans at risk, according to a new report from the US Geological Survey.
On Monday, for the first time ever, the USGS released maps indicating which parts of the country are most at risk of damaging earthquakes, both natural and man-made. The map showed that states like Oklahoma, Kansas, Texas, Colorado, New Mexico and Arkansas are most vulnerable to dangerous man-made tremors.

Naturally occurring earthquakes are most likely to strike California and parts of western Nevada.Some 7 million people live in areas at risk of man-made earthquakes, according to the USGS. Previous maps didn’t account for tremors induced by human activity, but the latest report presumes that more will occur going forward.

“By including human-induced events, our assessment of earthquake hazards has significantly increased in parts of the US,” Mark Petersen, chief of the USGS National Seismic Hazard Mapping Project, said in a statement. “This research also shows that much more of the nation faces a significant chance of having damaging earthquakes over the next year, whether natural or human-induced.”

Concern over earthquakes caused by humans has increased since fracking became more widespread. The process involves shooting a highly pressurized combination of water, sand and chemicals into layers of rock in order to free up gas buried in the ground. However, the leftover wastewater is then deposited into underground wells, which can sit near or on fault lines that can increase the risk of earthquakes.

Large cracks in the sidewalk in Coyle, Okla., appeared after several earthquakes on Jan. 24.

Some parts of Oklahoma and Texas now have about the same risk of an earthquake as parts of California, according to the U.S. Geological Survey.

The big difference is, the quakes in Oklahoma and Texas are “induced” — they’re caused by oil and gas operations that pump wastewater down into underground wells.

USGS scientists have now published the first maps of these new quake zones, and they’re an eye-opener. An eye-opener because 7 million people are now, suddenly, living in quake zones. There are 21 hot spots where the quakes are concentrated; they’re in places where, historically, noticeable earthquakes were rare: Texas, Colorado, Arkansas, Kansas, New Mexico and Oklahoma. Ohio and Alabama have also experienced some induced quakes.

USGS Forecast For Damage from Natural And Induced Earthquakes In 2016 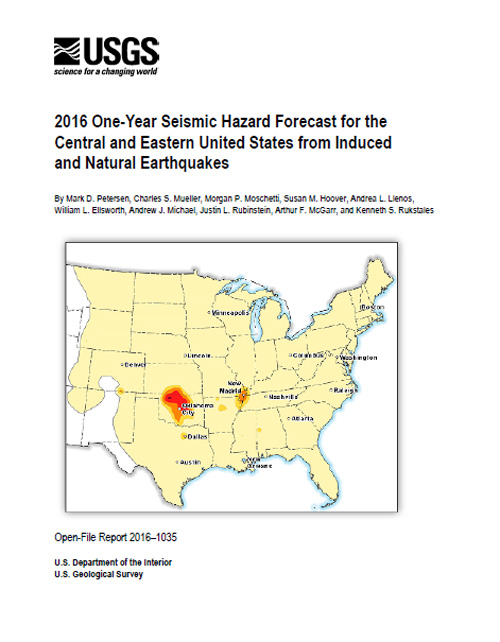 The U.S. Geological Survey (USGS) has produced a 1-year seismic hazard forecast for 2016 for the Central and Eastern United States (CEUS) that includes contributions from both induced and natural earthquakes. The model assumes that earthquake rates calculated from several different time windows will remain relatively stationary and can be used to forecast earthquake hazard and damage intensity for the year 2016. This assessment is the first step in developing an operational earthquake forecast for the CEUS, and the analysis could be revised with updated seismicity and model parameters. Consensus input models consider alternative earthquake catalog durations, smoothing parameters, maximum magnitudes, and ground motion estimates, and represent uncertainties in earthquake occurrence and diversity of opinion in the science community. Ground shaking seismic hazard for 1-percent probability of exceedance in 1 year reaches 0.6 g (as a fraction of standard gravity [g]) in northern Oklahoma and southern Kansas, and about 0.2 g in the Raton Basin of Colorado and New Mexico, in central Arkansas, and in north-central Texas near Dallas. Near some areas of active induced earthquakes, hazard is higher than in the 2014 USGS National Seismic Hazard Model (NHSM) by more than a factor of 3; the 2014 NHSM did not consider induced earthquakes. In some areas, previously observed induced earthquakes have stopped, so the seismic hazard reverts back to the 2014 NSHM. Increased seismic activity, whether defined as induced or natural, produces high hazard. Conversion of ground shaking to seismic intensity indicates that some places in Oklahoma, Kansas, Colorado, New Mexico, Texas, and Arkansas may experience damage if the induced seismicity continues unabated. The chance of having Modified Mercalli Intensity (MMI) VI or greater (damaging earthquake shaking) is 5–12 percent per year in north-central Oklahoma and southern Kansas, similar to the chance of damage caused by natural earthquakes at sites in parts of California.