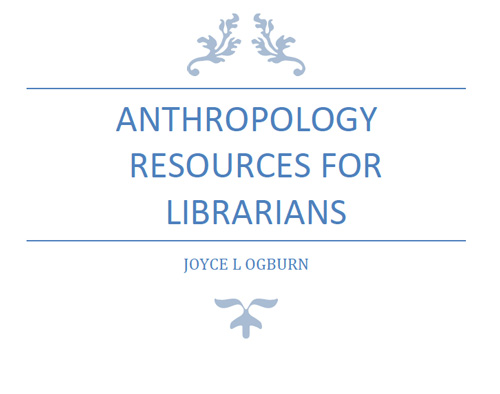 Developers don’t get it: climate change means we need to retreat from the coast

It is preposterous to build in areas that are bound to flood. So why are real estate companies still doing it? 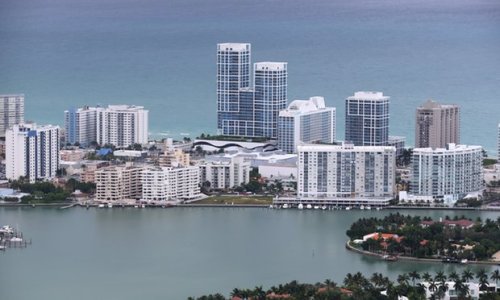 Are developers deluding themselves and others? Photograph: Joe Raedle/Getty Images

Sea-level rise may be the most predictable outcome of climate change. Expanding warmer waters and melting land ice both contribute to flooding – and scientists agree that we are locked into sea-level rise for centuries to come. The question is not if we will retreat from the coast, but when. Still, the rush to develop the coast occurs at a maddening pace.

We now know that 13.1 million people are at risk of flooding along the US coast by the end of this century. A new study published in Nature Climate Change further suggests that massive migration will occur unless protective measures are taken. Since sea-level rise will speed up after the end of the century due to increased glacier and ice sheet melting, the flooding we face in this century is just the tip of the iceberg.

The problem is particularly severe along our 3,000-mile low-lying sandy barrier island coast extending, with a few breaks, all the way from the South Shore of Long Island to the Mexican border. Along this long barrier island coast, Florida has the longest and most heavily developed shoreline.

In Miami, a city perilously perched atop a very porous limestone, two multibillion-dollar construction projects are under way, despite the fact that parts of the city routinely flood during high tides and that widespread flooding by the rising sea in a few decades is a virtual certainty. No sea walls, levees or dikes can stop the rising waters from flowing through the underlying spongy limestone and into the city. Miami is ultimately doomed.

A few miles to the north, Fort Lauderdale is undergoing equally intense development and population growth. This city has more beachfront high-rise buildings per mile than any other American beach. According to Katherine Bagley of Inside Climate news “nearly 5,000 apartments or condos are or soon will be under construction” in the city, which already faces routine nuisance flooding. The city’s many canals make Fort Lauderdale all the more vulnerable to rising seas. In light of the wet future in store for the city, increased density is insane. 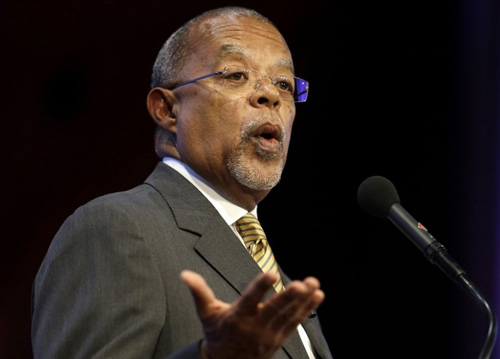 When documentarian Ken Burns and Harvard professor Henry Louis Gates Jr. kicked off a national speaking tour on race in Charleston, S.C., in December, Donald Trump’s run for the Republican presidential nomination was a disturbing phenomenon, but one that seemed likely to collapse once voters actually started going to the polls. Three months later, Trump is the Republican front-runner. And when Gates and Burns appeared at George Washington University’s Lisner Auditorium on Monday night, they turned to history not merely as a tool of a more general national reconciliation, but in an attempt to explain the unnerving turn in American politics.

The tour began as “our attempt to try to make some meaning out of” the mass shooting at Emanuel African Methodist Episcopal Church in Charleston, as Burns explained; they first went to that city to raise money for former mayor Joe Riley’s planned International African American Museum.

Both Burns and Gates suggested that Trump’s rise was of a piece with the backlash to President Obama’s election and tenure in office. Burns said he had been surprised by Obama’s victory, because “I assumed the American people would only tolerate a conservative, moderate Republican” as the first black president. Instead, “The fact that a black man is in the White House drove some people in America totally and completely out of their minds,” Gates suggested.

“People laughed at Donald Trump. I never did … He figured out how to tap into the fear and anxiety of a significant number of people,” Gates continued. “He seems to be getting worse. He seems to be exploiting the contradictions in American society.”

Warmest Winter And A Solar Boom | On Point

March 14, 2016 at 11:00 AM
In the warmest winter on record, hope again in the explosive growth of solar energy. We follow the sun. 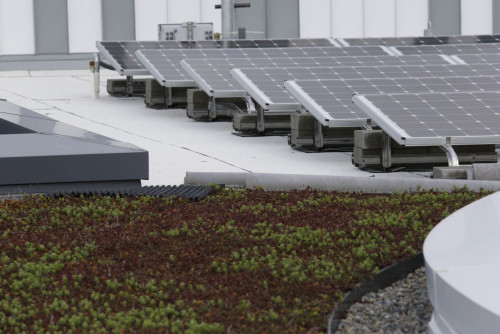 Solar panels and a green roof are among the sustainably-built features of the new Google building on the company’s campus Tuesday, Feb. 16, 2016, in Kirkland, Wash. (AP Photo/Elaine Thompson)

Gliding out of what we now know was the warmest winter in the recorded meteorological history of the United States, a lot of people are wondering what next for energy policy. How we get off the global warming train. At a time of record low oil and gas prices, there’s no way alternative energy can compete with fossil fuels, right? Well, wrong. The way things are put together right now, solar is booming. On rooftops and by roadways and all over the place. This hou On Point, the warm winter, the solar boom.

Dan Reicher, director of the Stanford Center for Energy Policy and Finance. Chair of the American Council on Renewable Energy. Member of the U.S. Secretary of Energy’s Advisory Board. (@dan_reicher) 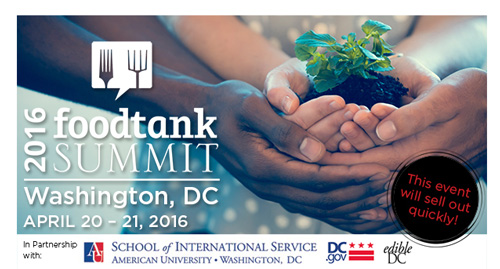 Food Tank, in partnership with the Chicago Council on Global Affairs and University of Chicago Booth School of Business, is excited to announce the 1st annual Chicago Food Tank Summit at the Gleacher Center. This two-day event will feature more than 70 different speakers from the food and agriculture field. Researchers, farmers, chefs, policy makers, government officials, and students will come together for interactive panels.

The event will feature interactive panels moderated by top food journalists, networking, and delicious food, followed by a day of hands-on activities and opportunities for attendees. This is the fourth in a series of four two-day Summits in 2016 which will bring together some the world’s most impactful food system leaders. Last year, the Food Tank Summit sold out in minutes and drew in more than 15,500 livestream viewers. This is a can’t miss event for 2016! 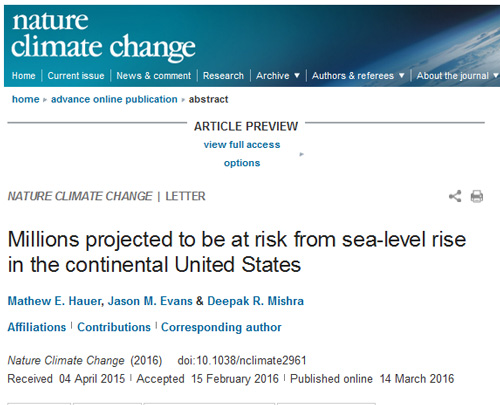 Sea-level rise (SLR) is one of the most apparent climate change stressors facing human society1. Although it is known that many people at present inhabit areas vulnerable to SLR2, 3, few studies have accounted for ongoing population growth when assessing the potential magnitude of future impacts4. Here we address this issue by coupling a small-area population projection with a SLR vulnerability assessment across all United States coastal counties. We find that a 2100 SLR of 0.9 m places a land area projected to house 4.2 million people at risk of inundation, whereas 1.8 m affects 13.1 million people—approximately three times larger than indicated by current populations.

These results suggest that the absence of protective measures could lead to US population movements of a magnitude similar to the twentieth century Great Migration of southern African-Americans5. Furthermore, our population projection approach can be readily adapted to assess other hazards or to model future per capita economic impacts. 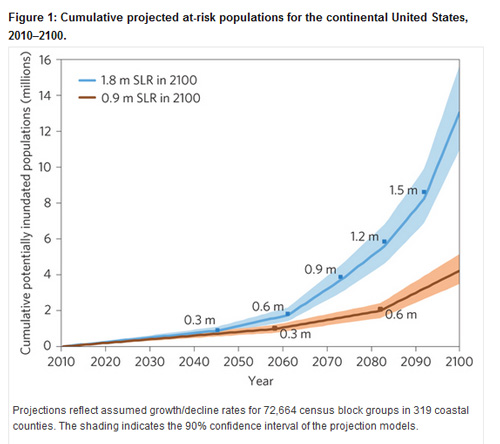 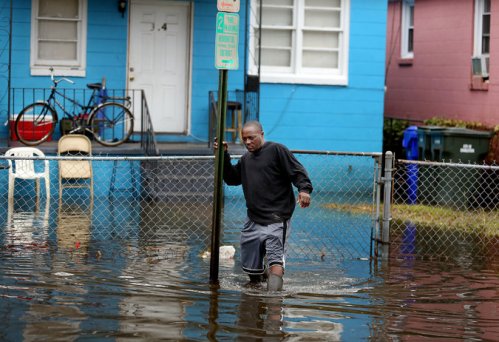 Rodney Clement gingerly stepped from the sidewalk to the street through tidal flooding around his home in Charleston, S.C., last year. Credit Grace Beahm/The Post and Courier, via Associated Press

Sea-level rise, a problem exacerbated by greenhouse gas emissions, could disrupt the lives of more than 13 million people in the United States, three times the most current estimates, according to a study published Monday.

Rising seas, which already endanger coastal communities through tidal floods and storm surges, could rise three feet or more over the next century if emissions continue at a high level, threatening many shoreline communities. The study, published in Nature Climate Change, argues that most projections vastly underestimate the number of people at risk because they do not account for population growth.

For the study, the authors combined future population estimates with predicted sea-level rise, using data from the National Oceanic and Atmospheric Administration, to demonstrate that millions are at risk: 4.2 million if seas rise by three feet, or 13.1 million with a six-foot increase, a high-end estimate. 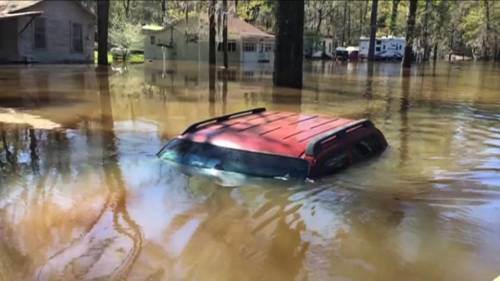 A new study shows the number of people who could be displaced by sea level rise this century in the United States due to global warming is much higher than previously thought, with more than 13 million people at risk, nearly half of them in Florida. Those numbers are about three times higher than previous estimates for displacement. Researcher Deepak Mishra elaborated on the findings.

Deepak Mishra: “I think there’s a certain layered approach that can be—that can stem from this research, for example, if you tell people that, OK, 85 years down the road, 13 million people will be affected if we take the most extreme projection, which is 1.8-meter sea level rise by 2100. But I think we need to take this study forward by doing another study of what is the impact of sea level rise right now in terms of frequent coastal flooding.”

The study comes amid devastating flooding in Louisiana that have damaged thousands of homes and caused President Obama to declare a “major disaster.”

http://democracynow.org – “Fascism: Could it happen here?” That’s a question increasingly being raised as Republican presidential front-runner Donald Trump continues his bid for the White House. People as varied as actor George Clooney, comedian Louis C.K. and Anne Frank’s stepsister Eva Schloss have suggested Trump is a fascist. Earlier this month, Mexican President Enrique Peña Nieto criticized Trump by invoking the fascist dictators Adolf Hitler and Benito Mussolini. Trump has retweeted quotes by Mussolini. Is Donald Trump really a fascist? We put the question to the father of fascism studies, Robert Paxton, professor emeritus of social science at Columbia University and author of several books, including “The Anatomy of Fascism.”

Launch this interactive tool by clicking the text link just below the image. View the tutorial information below to help you control the display of map overlays and learn how to generate, manipulate, and interpret innovative graphs of historical data.

About the Tool and Data

Base maps (imagery, street maps) come from ESRI Web services. Map layers in the tool represent geographic information available through climate.data.gov. Each layer’s source and metadata can be accessed through its information icon.

Climate Explorer graphs available via the tools Historical Data tab display 1981-2010 U.S. Climate Normals for temperature and precipitation, overlain with daily observations from the Global Historical Climatology Network-Daily (GHCN-D) database. Please note that GHCN-D data have been checked for obvious inaccuracies, but they have not been adjusted to account for the influences of historical changes in instrumentation and observing practices. GHCN-D data are useful for comparing weather and climate, but for long-term climate change analyses, we recommend the National Climatic Data Center’s Climate at a Glance.