The summit had been at risk of stalling before the US and the EU sprung a surprise move. Then, after three all-night sessions, decades of failure were reversed and a historic agreement reached

Sunday 13 December 2015 02.00 EST
“I see no objections,” said the expressionless French foreign minister Laurent Fabius, barely glancing at the rows of country delegates then sharply banging his gavel. There was a moment’s silence as if no one could quite believe it, and then the cheers rang out, the tears of relief flowed and in scenes of high emotion, the anonymous conference hall in a northern suburb of Paris erupted. Thousands of delegates started to applaud each other. They had done it.

After more than 20 years of abject failure to agree a new global climate deal, rich and poor countries had agreed to differ and had finally adopted 31 pages of dense, legal text which, just possibly, could set the world on a different, cleaner safer, energy path.

When 150 heads of state pledged two weeks ago in Paris to forge a new climate deal, it seemed certain they would make history where decades of tortuous UN climate talks had failed. 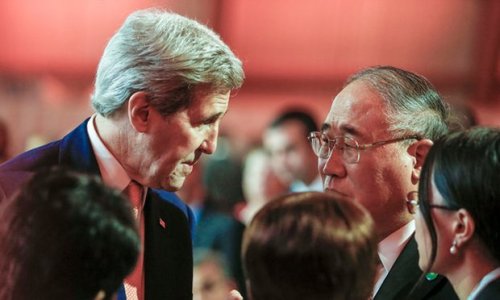 At 11.30pm Paris time, a small group of White House officials dashed into a temporary plywood hut in the exhibition hall where, a few hours earlier, a historic legal agreement to cut emissions causing climate change was secured. They were just in time to catch a live feed of Barack Obama declaring “a turning point for the world”.

These were the officials who helped set the US negotiating position for the talks – or, perhaps more accurately, helped craft the deal according to US specifications in order to insulate Obama and the agreement from attacks.

When it came to Republicans in Congress, they wanted the agreement to be bullet-proof. That was no easy feat in a negotiation over an immensely complicated challenge involving nearly 200 countries, and half a dozen rival negotiating blocs.

“We met the moment,” Obama said in his address. The Paris agreement on its own would not end climate change, he said, but “this agreement will help delay or avoid some of the worst consequences of climate change, and will pave the way for even more progress, in successive stages, over the coming years”.

The first chunk of a $3bn commitment made at the Paris climate talks ‘shows the US stands squarely behind climate commitments’, the State Department said

The Obama administration has made a first installment on its $3bn pledge to help poor countries fight climate change – defying Republican opposition to the president’s environmental plan.

The $500m payment to the Green Climate Fund was seen as critical to shoring up international confidence in Barack Obama’s ability to deliver on the pledges made at the United Nations’ climate change conference in Paris in late 2015.

Obama is expected to announce a number of joint climate initiatives when the Canadian prime minister, Justin Trudeau, visits Washington this week, sources familiar with the plans said.

The White House is also working with United Nations officials to encourage countries to formally approve the Paris climate agreement ahead of a signing ceremony on 22 April.

At least 55 countries, representing at least 55% of global climate emissions, must ratify the agreement before it takes effect.

Administration officials said the initial $500m payment to the Green Climate Fund demonstrated that Obama would follow through on the promises of last December’s Paris climate agreement – despite February’s setback at the supreme court and threats by Republican presidential candidates to dismantle Obama’s agenda.

What’s the Answer to Climate Change? – The Atlantic

It’s not enough to let the market handle it or depend on geo-engineering.

A&Q is a special series that inverts the classic Q&A, taking some of the most frequently posed solutions to pressing matters of policy and exploring their complexity.

There is one convenient thing about climate change: The problem of global warming poses so many threats, and emerges from so many causes, that there’s not one single solution for it.

This is convenient because it means you can work on a lot of different angles and still help the underlying problem. If every American stopped eating meat tomorrow, the situation would immediately begin to improve but it wouldn’t be solved; ditto if every coal plant worldwide was shut down tomorrow. Even in that crazy-go-nuts mitigation scenario, we’d immediately be a lot better off, but there would still be work to do.

So thinking about climate change requires a two-mindedness among those who want to pitch in to work against it—or who just want to be educated voters on their city, country, or planet. On the one hand, we have reached the point where climate change will arrive regardless of what we do. Climate change is vast, hopeless, horrifying, anxiety-inducing, and imagination-staggering. On the other, it’s a challenge without parallel in human history: a vast, fascinating, thrilling, inspiring, mind-bending opportunity.

Winona LaDuke, the renowned indigenous rights leader and two-time Green Party U.S. Vice Presidential candidate highlights the struggles of indigenous peoples to protect their food sovereignty, restore their food systems and protect their cultures and foods from genetic modification. This speech was presented at the 2007 Bioneers National Conference in San Rafael, CA.

To experience talks like this, please join us at the Bioneers National Conference each October, and regional Bioneers Resilient Community Network gatherings held nationwide throughout the year.

Learn more about the Bioneers Indigenous Knowledge Program at http://www.bioneers.org/pages/indigen… and stay in touch via Facebook (https://www.facebook.com/Bioneers.org) and Twitter (https://twitter.com/bioneers.

Ancient Apocalypse Death on the Nile

21 years old. Member of Earth in Brackets, a group students from the College of the Atlantic in Bar Harbour, ME/USA. Currently following the climate talks in Durban.