COP21 & The Pathway to Paris

What’s the significance of the COP21 Climate Change Conference in Paris? Belfer Center experts explain how far we’ve come since the adoption of the United Nations Framework on Climate Change and the new approaches to tackling climate change.

More on the Harvard Kennedy School presence at the Paris Climate Conference: http://belfercenter.org/ParisClimateT… 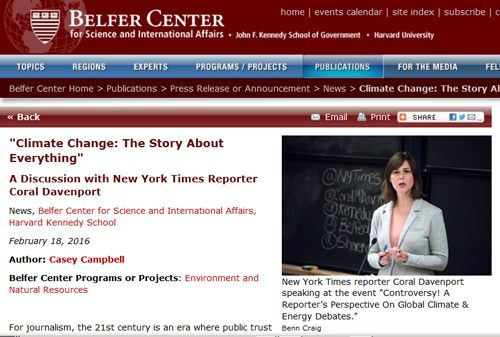 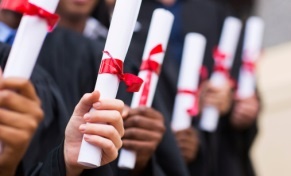 Or, what IR theory can teach you about living a happy and productive life.

It’s late May, and thousands of young adults are donning academic robes, receiving their diplomas, and making the transition from students to alumni. If you are one of those happy graduates, this moment is a significant rite of passage; henceforth it will be the Development Office, not the Registrar, that asks you for money. Meanwhile, your grateful and newly impoverished parents will be making the transition from human ATMs to empty nesters (unless you have younger siblings or become a boomerang kid).

This year I’ll be among those beaming throngs of moms and dads, as I watch my son receive his B.S. in neuroscience at Wesleyan University. Of course I’m thrilled, and immensely proud. But there’s a downside to this joyful occasion: I’ll be forced to sit through another commencement speech….

For more information about this publication please contact the Belfer Center Communications Office at 617-495-9858.

The top ten things junior faculty need to know — and why it should matter to the rest of us.

For academics, a tenured position is the Holy Grail. And not without reason: promotion to tenure means you don’t have to look for a new job when your term as an assistant professor is up, and tenure provides a degree of ironclad job security that most professions lack. The raison d’être of tenure is not to let senior faculty coast until they retire, however; its purpose is to enable scholars to pursue lines of research that might not have an immediate payoff, and to let them write or say controversial things without worrying that doing so might cost them their jobs. If you believe in academic freedom and the importance of wide-ranging discourse, then the institution of tenure makes good sense.

Even if you’re not an academic or contemplating graduate school, who gets tenure at our universities still matters. Some academics like yours truly do engage in policy debates, and a few of those who do actually get read and may occasionally have a real-world impact. Senior faculty can use that position to angle for careers in Washington, D.C. — as many of my colleagues have done, along with people like Condoleezza Rice, Stephen Krasner, Vali Nasr, or Bruce Jentleson — and of course academics play important roles training those who may eventually occupy top positions in government in the United States and overseas. So decisions for tenure are not an entirely academic question….

Exoplanet Census Suggests Earth Is Special after All – Scientific American 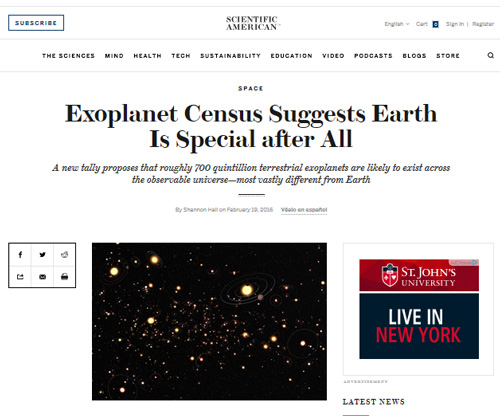 More than 400 years ago Renaissance scientist Nicolaus Copernicus reduced us to near nothingness by showing that our planet is not the center of the solar system. With every subsequent scientific revolution, most other privileged positions in the universe humans might have held dear have been further degraded, revealing the cold truth that our species is the smallest of specks on a speck of a planet, cosmologically speaking. A new calculation of exoplanets suggests that Earth is just one out of a likely 700 million trillion terrestrial planets in the entire observable universe. But the average age of these planets—well above Earth’s age—and their typical locations—in galaxies vastly unlike the Milky Way—just might turn the Copernican principle on its head.

Astronomer Erik Zackrisson from Uppsala University and his colleagues created a cosmic compendium of all the terrestrial exoplanets likely to exist throughout the observable universe, based on the rocky worlds astronomers have found so far. In a powerful computer simulation, they first created their own mini universe containing models of the earliest galaxies. Then they unleashed the laws of physics—as close as scientists understand them—that describe how galaxies grow, how stars evolve and how planets come to be. Finally, they fast-forwarded through 13.8 billion years of cosmic history. Their results, published to the preprint server arXiv (pdf) and submitted to The Astrophysical Journal, provide a tantalizing trove of probable exoplanet statistics that helps astronomers understand our place in the universe. “It’s kind of mind-boggling that we’re actually at a point where we can begin to do this,” says co-author Andrew Benson from the Carnegie Observatories in California. Until recently, he says, so few exoplanets were known that reasonable extrapolations to the rest of the universe were impossible. Still, his team’s findings are a preliminary guess at what the cosmos might hold. “It’s certainly the case that there are a lot of uncertainties in a calculation like this. Our knowledge of all of these pieces is imperfect,” he adds

Prof. Arjen Hoekstra: The water footprint of our daily consumer goods – why meat is driving water scarcity. on Vimeo

Professor Arjen Hoekstra is Professor in Water management at the University of Twente, the Netherlands, and the co-founder and scientific director of the Water Footprint Network

The Water Footprint of Modern Consumer Society by Arjen Y. Hoekstra Ebook PDF
Click http://bit.ly/1LuQIVj
Author: Arjen Y. Hoekstra
Publish: 2013-06-19
Water is not only used in the domestic context, but also in agriculture and industry in the production of commercial goods, from food to paper. The water footprint is an indicator of freshwater use that looks at both direct and indirect use of water by a consumer or producer. The water footprint of an individual, community or business is defined as the total volume of freshwater that is used to produce the goods and services consumed by the individual or community or produced by the business. This book shows how the water footprint concept can be used to quantify and map the water use behind consumption and how it can guide reduction of water use to a sustainable level. With a number of case studies, it illustrates water use along supply chains and that water consumption at one place is often linked to water use at another.

For example, it is calculated that it takes 15,000 litres of water to produce 1 kg of beef, or 8,000 litres of water to produce a pair of jeans. The book shows that imports of water-intensive products can highly benefit water-scarce countries, but also that this creates a dependency on foreign water resources. The book demonstrates how water-scarce regions sometimes, nevertheless, use lots of water for making export products. It raises the issue of sustainable consumption: how can consumers, businesses and governments get involved in reducing the water footprints of final consumer goods?

Bill Gates on getting billionaires behind clean energy | Marketplace.org 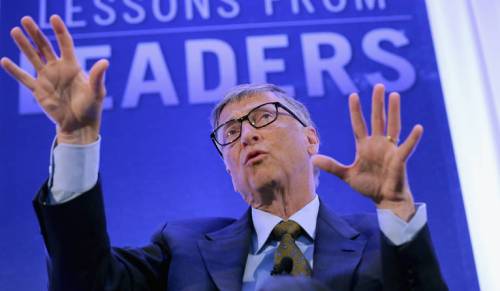 Bill Gates, founder of Microsoft and co-chair of the Bill and Melinda Gates Foundation, directed his attention towards 15-year-olds in his annual letter to followers of the foundation.

In the wake of the climate talks in Paris in November, the Breakthrough Energy Coalition, the billionaire-backed group searching for global energy solutions, is thinking about the future. And Bill Gates, the Coalition’s founder, is writing about it in his yearly letter to followers of the Bill and Melinda Gates Foundation. This year’s letter is addressed to a young audience — 15-year-olds — framed around the question, “If you could have any superpower, what would it be?” Melinda and Bill’s answers, respectively? More time, and more energy. Investing in creating clean, affordable energy will change the world, Gates says.

Marketplace Morning Report host David Brancaccio spoke with Gates about the Breakthrough Energy Coalition and the future of energy.

Brancaccio: Regarding electric power, energy, what is the market failure here that you and some other wealthy individuals are trying to fix?

Gates: We need clean energy that’s incredibly reliable, and most of the renewables we have are intermittent. Being able to store that energy or having some new source that runs 24 hours a day, that’s what we need to solve the climate problem.

Gates: Right. So we start at the research level, government has not increased the energy R&D budget in the face of this need for cheaper energy, energy security, and clean energy. That gives us a more supply on the innovation side. And then we ask the private sector to step up. There’s a big reward there, if you can solve it. It takes longer than IT, but it can still be a profit making activity.

Brancaccio: Yeah it could take awhile. I mean, you need to be a very patient man. You and I could be old old men before you see any of this.

Gates: Right. The best writer on this, Vaclav Smil, reminds us that it’s been more than 50 years in the past between an advance and when it’s largely deployed in the energy system. We need to do better this time, but it does take time, even with something really advanced.

Brancaccio: But I want to understand this — is it a feature or a bug that wealthy individuals feel the need to fund this type of work?

Gates: Well, when there’s profit to be made, which in the long run, there really is here, it’s great for capitalism to fund dozens of different ideas. It’s not like the moonshot where we’ll just take one approach and the technology’s good enough that there’s a really high chance of success. It’s like the early days of the automobile where it could have been the steam car, the electric car, or the internal combustion engine. And firms competed and one won out so dramatically people forget the other two were even tried.