Davos 2016 – Shaping Davos: The Power of the Platform

The “platform” as a business model is behind the rapid rise of companies that are reshaping sectors like transport and hospitality in cities around the world. How are platforms impacting the consumer and career choices of millennials worldwide? On the agenda:
– Changing company and consumer mindsets
– Rethinking municipal and national regulation
– Implications for corporate social responsibility 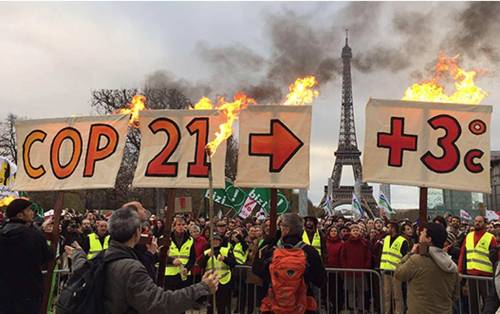 Activists at COP 21, refuse to put up with human-as-usual behavior that threatens climate change. (Chloe Maxim)

When I was younger, I used to be zealous about changing light bulbs. Then my focus shifted to changing the systems that determine how we use energy, because, as the saying goes, “we need system change, not climate change.” As a youth delegate to COP21—the international climate-change conference in Paris last December—I witnessed the most sophisticated political skills the world has to offer focus on one goal: to change the fundamental components of our energy systems. They failed. In Paris, I learned that there is an even deeper level of change required to prevent climate catastrophe. It’s not system change—it’s human change.

COP21 was a big deal before it began. Unprecedented international commitment to address climate change set the stage for a global binding treaty. More than 150 nations submitted emissions reduction goals, compared to the 27 countries that made commitments ahead of Copenhagen’s COP15 in 2009. President Obama said that COP21 was the “best chance we have to save the one planet we have.” The grassroots movement fully engaged as thousands of people marched around the world to demand climate action. No doubt: Paris was an historic moment.

By December 12, 2015, over 190 nations arrived at consensus, producing a 31-page agreement. For the first time, an explicit global commitment existed to end our dependence on fossil fuels. There was instant praise. A headline from The Guardian read: “nearly 200 nations sign in end of fossil fuel era.” John Kerry called it a “victory for all the planet and future generations.”

“We have made history together! #ParisAgreement at #COP21 unites the world for a better future.”

COP21 was not the silver bullet to stop all climate chaos, but it was recognized as a huge victory for international collaboration. Celebrations erupted across Paris.

I was surrounded by exuberance but had never felt more alone, grieving instead of joyful. Yes, COP21 was a political triumph, but I could not overlook a mountain of bare facts. The agreement is weak and profoundly unjust, condemning youth and front-line communities to bear the full brunt of climate catastrophe. There is no clear date by which the world phases out fossil-fuel use. There is an appalling lack of financial support for front-line communities facing the worst climate impacts. Even if all countries adhere to their non-binding emissions-reduction targets, our planet will warm 2.7C–3.7C, a level far beyond what is safe. The hypocrisy of COP21 was overwhelming as—during the negotiations—President Obama signed a bill expediting permits for oil and gas pipelines. At 3 am on December 12, headlines declared that John Kerry threatened to walk out of negotiations if developed countries were required to provide financial assistance to developing countries. A debate over “shall” or “should” dominated the final hours of COP21.

The night before negotiations ended, I stumbled out of a meeting at 1 am and found myself on a shuttered Parisian street lit only by a few dim lamps. The cold wind whipped my cheeks, but my chest burned red hot with rage at the politicking that was celebrated while my generation faced doom. The worst pain came from images of my home that flashed before my eyes. I’ve already seen so much change in my short lifetime: The animals on our farm shed their coats during winter warm spells, only to freeze when the cold returns. Spring comes early. Summers are hot and dry. My heart broke at the thought of all that I love most falling prey to the chaos of politics and climate change. Anguish filled my soul as I realized that the best politics that the world has to offer are not enough to avert disaster.

Chloe Maxmin is a recent graduate of Harvard College. She became a climate activist at 12, later forming the Climate Action Club in high school and galvanizing a grassroots movement in her community. At Harvard, she co-founded Divest Harvard–a campaign calling on Harvard University to divest from fossil fuels–and led the campaign for two years, during which time Divest Harvard grew from group of 3 into a movement of over 70,000 people. Chloe also founded First Here, Then Everywhere to empower youth climate activists. She has received national and international recognition for her activism, including being named a “Green Hero” by Rolling Stone, receiving the Brower Youth Award, and appearing on Real Time with Bill Maher. She is currently a Fellow with The Nation. For more information, visit chloemaxmin.com, and @chloemaxmin.

Oil prices climbed 6% on Friday to 31 dollars barrel, even as as oil producing nations differed on whether to cut production. Leaders and stakeholders in the oil sector attending the world economic forum in the Swiss resort town of Davos, resumed their debate around production cuts at the meeting. Nigeria’s oil minister said the Organization of Petroleum Exporting Countries needs to meet soon over the matter while Saudi Arabia reiterated it won’t reverse course unless non-OPEC nations play their part in production cuts. Officials from two non-OPEC nations speaking on the same panel, Azerbaijan and Russia, were however pessimistic a decision could be reached soon. This, as Venezuela begs for a crisis meeting. The current rally in oil prices was also bolstered by hopes of a fresh stimulus by major central banks, cold weather on both sides of the Atlantic and oil installations attacks in Libya.

The Annual Meeting 2016 draws to a close with a powerful musical and visual performance by cellist and composer Zoe Keating.

UpFront – Noam Chomsky on the war against ISIL

In this episode of UpFront, Mehdi Hasan speaks to the renowned American academic Noam Chomsky about his public spat with the Turkish president, the war against ISIL and Russia’s annexation of Crimea.We also look at the ramifications of the Saudi Arabia-Iran feud, and debate the state of Egypt five years after the Arab Spring.

In 1948, a British pilot serving in Iraq acquired a clay tablet with an intriguing, 3,700 year-old inscription. The ancient writing tells the story of how the god Enki warns a Sumerian king named Atra-Hasis of a future flood that will destroy mankind; Enki gives him instructions for building a boat to save his family and livestock. If that sounds like a familiar tale, it’s because this was one of several ancient flood traditions that, centuries later, would inspire the biblical story of Noah. But the tablet’s inscription describes a boat very different from the traditional image of the Ark—it’s said to be circular and made of reeds. Is this nothing more than a fanciful myth? Or could such a reed boat have carried Atra-Hasis’ family of more than one hundred and his many animals? Join NOVA as a team of historians and expert boat builders investigates this fascinating flood legend and sets out to rebuild a tantalizing, ancient forerunner of the Ark.

By 2025, at least one billion people around the world will have taken active steps towards strengthening their
resilience.

This is the vision for the One Billion Coalition – a world where all people are safer, healthier and more prosperous,
even in the face of adversity. A Coalition of Coalitions that provides individuals and communities worldwide with the
commitment, resources and confidence to understand their risks and take action to reduce their vulnerability.

The One Billion Coalition is based on the belief that, given the right support, vulnerable groups everywhere will work together and care for their own and for others. The idea is to build a wider supportive network of committed volunteers and organizations, governments, businesses, civil society groups and others.

While technology enters its next golden age, the percentage of adults working or looking for work is the lowest in almost 40 years in countries such as the United States. Is the Fourth Industrial Revolution failing the middle class?

From monetary tightening to rattled bond markets, what are the trends and transformations reshaping financial markets in 2016?

This session was developed in partnership with Fox Business.