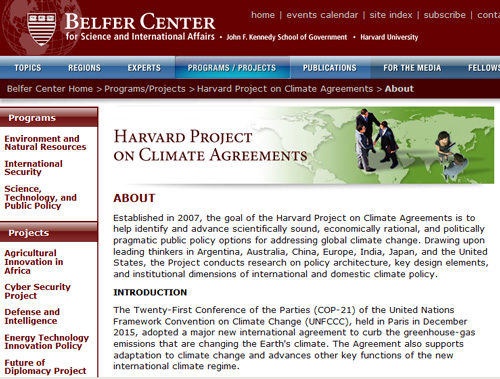 The Twenty-First Conference of the Parties (COP-21) of the United Nations Framework Convention on Climate Change (UNFCCC), held in Paris in December 2015, adopted a major new international agreement to curb the greenhouse-gas emissions that are changing the Earth’s climate. The Agreement also supports adaptation to climate change and advances other key functions of the new international climate regime.

The Paris Agreement represents a significant step of progress in global efforts to address climate change. Nearly all of the 195 national governments that are members of the UNFCCC submitted plans to reduce greenhouse-gas emissions—a level of participation far exceeding that of the Kyoto Protocol, which was the first major international climate-change agreement. In addition, the Paris Agreement provides a clear pathway for member countries to increase the ambition of their mitigation plans over time.

The Paris Agreement will, for many important purposes, become effective in 2020. A great deal of work remains to be done before that time to define how the new regime will operate and how the Agreement will be implemented. The Harvard Project on Climate Agreements is engaging leading scholars and policy practitioners to identify and assess research-based options that will be useful to policy makers, negotiators, and stakeholders as we elaborate and then implement the Paris Agreement.

For More Information: For research results, news of events and presentations, and other information, see the Project’s website: http://belfercenter.ksg.harvard.edu/project/56/.