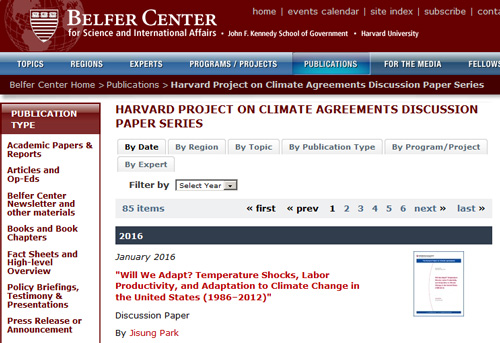 The Twenty-First Conference of the Parties (COP-21) of the United Nations Framework Convention on Climate Change (UNFCCC), held in Paris in December 2015, adopted a major new international agreement to curb the greenhouse-gas emissions that are changing the Earth’s climate. The Agreement also supports adaptation to climate change and advances other key functions of the new international climate regime.

The Paris Agreement represents a significant step of progress in global efforts to address climate change. Nearly all of the 195 national governments that are members of the UNFCCC submitted plans to reduce greenhouse-gas emissions—a level of participation far exceeding that of the Kyoto Protocol, which was the first major international climate-change agreement. In addition, the Paris Agreement provides a clear pathway for member countries to increase the ambition of their mitigation plans over time.

The Paris Agreement will, for many important purposes, become effective in 2020. A great deal of work remains to be done before that time to define how the new regime will operate and how the Agreement will be implemented. The Harvard Project on Climate Agreements is engaging leading scholars and policy practitioners to identify and assess research-based options that will be useful to policy makers, negotiators, and stakeholders as we elaborate and then implement the Paris Agreement.

For More Information: For research results, news of events and presentations, and other information, see the Project’s website: http://belfercenter.ksg.harvard.edu/project/56/.

Attempts at crafting an international protocol to counter the effects of climate change have run into serious obstacles in recent years. Although the United Nations Framework Convention on Climate Change(UNFCCC) continues its series of Conferences of the Parties (UN-COP) aimed at identifying practical and effective solutions to global warming, little headway has been made in recent years. Robert Stavins, the Albert Pratt Professor of Business and Government and director of the Harvard Environmental Economics Program and its subsidiary Harvard Project on Climate Agreements, focuses his research on diverse areas of environmental economics and policy, and has written extensively on the promise of cap-and-trade policies to help reduce carbon emissions.

12 Experts Comment: What Oil Below $30 Means for Efforts to Tackle Climate Change

The oil price slide below $30 a barrel is reverberating through the global economy. Photo credit: Sergio Russo / Flickr

Simon Evans, Carbon Brief | January 18, 2016 1:14 pm
The oil price slide below $30 a barrel is reverberating through the global economy. With sanctions against Iran being lifted, prices face further downwards pressure.

The new lows come after prices spent much of the past year around the $50 mark, as Saudi Arabia’s attempts to win back market share from U.S. shale firms produced limited results.

The oil price slide below $30 a barrel is reverberating through the global economy. Photo credit: Sergio Russo / Flickr

There are recessions in Russia and Brazil. Saudi Arabia is burning through its reserves, its stock markets are in freefall and its population is feeling the squeeze, as it looks for new sources of cash.

Fossil fuel subsidies are being cut, from Saudi Arabia to India and Bahrain. The UAE is looking towards a life beyond oil. Oil majors are facing hard times, too, with BP set to axe 4,000 jobs as the total of shelved oil investments breaches $400bn since the price slump began in late 2014.

For all that, some papers have found reason for optimism.

An editorial in The Times says cheap oil is “bolstering Britain’s recovery.” The Financial Times says cheaper oil “may not be good for the prospects of reducing carbon emissions in the near term, but it is certainly of significant net benefit for the global economy and employment.”

With some predicting oil could fall as low as $10, an article in the Guardian looks at the tax, consumer and jobs effects for the UK.

From a global perspective, cheap oil might raise demand as well as putting pressure on oil producers. If oil remains cheap, the incentive to keep burning it could be stronger.

So, what does $30 oil mean for efforts to tackle climate change in the wake of the Paris agreement signed in December? Carbon Brief asked a range of experts for their views.

A mere 62 people own the same amount of wealth as the world’s poorest 3.6 billion people, according to an Oxfam report published on Monday. This number has fallen dramatically from 388 as recently as 2010 and 80 last year.

The above chart shows what size transport the billionaires would fit on. Photo credit: Oxfam

The report, An Economy for the 1 Percent, found that the wealth of the poorest half of the world’s population has fallen by a trillion dollars since 2010.

“This 41 percent drop has occurred despite the global population increasing by around 400 million people during that period,” Oxfam said. “Meanwhile the wealth of the richest 62 has increased by more than half a trillion dollars to $1.76 trillion.”

Using data from Credit Suisse, Oxfam also found that the richest 1 percent now has as much wealth as the rest of the world combined.

“It is simply unacceptable that the poorest half of the world population owns no more than a small group of the global super-rich—so few, you could fit them all on a single coach,” Mark Goldring, Oxfam Great Britain chief executive, said.

The report comes ahead of the World Economic Forum, an annual gathering of financial and political elites in Davos, Switzerland, which will take place Jan. 20 to Jan. 23.

“World leaders’ concern about the escalating inequality crisis has so far not translated into concrete action to ensure that those at the bottom get their fair share of economic growth,” Goldring said. “In a world where one in nine people go to bed hungry every night we cannot afford to carry on giving the richest an ever bigger slice of the cake.

“It is no longer good enough for the richest to pretend that their wealth benefits the rest of us when the facts show that the recent explosion in the wealth of the super-rich has come at the expense of the poorest.

“Ending extreme poverty requires world leaders to tackle the growing gap between the richest and the rest which has trapped hundreds of millions of people in a life of poverty, hunger and sickness.” 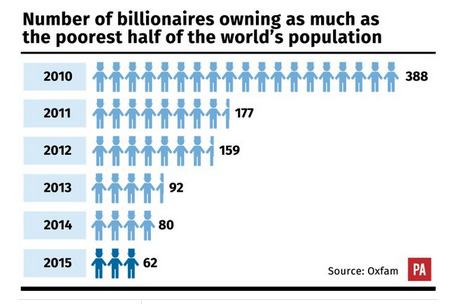 Cambridge, MA – Harvard University announced today that Robert and Renée Belfer, along with their son Laurence, are investing an additional $15 million to advance the work of the Belfer Center for Science and International Affairs at Harvard Kennedy School in addressing the world’s most critical security issues.

their philanthropic mission to build a more secure, peaceful world, the Belfer family’s gift puts the Belfer Center on the front lines of what CIA Director John Brennan calls the greatest threat to U.S. national security in the decade ahead: cyber threats. In particular, it launches a major new Cyber Security Project, which seeks to help create the conceptual arsenal for strategists to confront this growing challenge.

“The Belfer family’s remarkable generosity ensures that the resources of the entire University can be brought to bear on this vital threat to global security,” said Harvard University President Drew Faust. “For more than 40 years, the Belfer Center has served as an important hub for scholarship and teaching that has global impact. We are honored by the Belfers’ continued support for Harvard and share their determination to secure a more peaceful, prosperous world.”

Today we are pleased to release a new report: “Faith, Morality and the Environment: Portraits of Global Warming Six Americas.”
In recent months, we have witnessed an evolution in public discourse on global warming. Typically discussed in the news media solely as a scientific, environmental or political issue, global warming is now being reframed as a moral and spiritual issue by religious leaders – most notably by Pope Francis. Americans are now hearing – often for the first time – that global warming will have severe impacts on the world’s poor; that it violates divine dictates on the treatment of nature; and that it requires a concerted response from all nations in the name of social justice and God’s will.

To explore Americans’ receptivity to a moral framing, in Spring 2015, before the Pope’s encyclical and visit to the U.S., we assessed the religious and spiritual values and beliefs of Global Warming’s Six Americas, six groups within the American public with very different views on global warming. We found that most Americans at the time did not view global warming as a moral issue. Only the most concerned groups – the Alarmed and Concerned – viewed global warming as a moral issue, and only the Alarmed viewed it as an issue of social justice or poverty. Less than a third of any segment said global warming is a spiritual or religious issue, and 40 percent said that their views on the issue reflected their core moral values only slightly or not at all.

Values and beliefs that are widely held among Americans, however, suggest that a moral framing of global warming could resonate with many people currently unconcerned about the issue. For example, most Americans believe that caring for the poor, the environment and future generations is important, but few understand that reducing global warming will help all three. Most Americans believe that humans should be stewards, rather than rulers of nature, and levels of environmental concern are relatively high.

We are pleased to announce the release of a special report from our new study: The Francis Effect: How Pope Francis changed the conversation about global warming. Today more Americans and more American Catholics are worried about global warming than six months ago and more believe it will have significant impacts on human beings. Some of these changes in Americans’ and American Catholics’ views can be attributed to the Pope’s teachings, as 17 percent of Americans and 35 percent of Catholics say his position on global warming influenced their own views of the issue.

The report’s results draw from a unique study design of within-subject surveys of a nationally representative sample of American adults conducted in the Spring, prior to the release of the Pope’s encyclical Laudato Si’, and again in the Fall, after the Pope’s visit to the United States.