What the Earth would look like if all the ice melted

We learned last year that many of the effects of climate change are irreversible. Sea levels have been rising at a greater rate year after year, and the Intergovernmental Panel on Climate Change estimates they could rise by another meter or more by the end of this century.

As National Geographic showed us in 2013, sea levels would rise by 216 feet if all the land ice on the planet were to melt. This would dramatically reshape the continents and drown many of the world’s major cities.

UpFront – Syria: Starvation as a weapon of war

Images of malnourished children and elderly from the Syrian town of Madaya gripped the world last week. A UN aid convoy finally reached the besieged town on Monday with officials describing “horrifying conditions” for the more than 40,000 people trapped there.

Madaya is one example of the depth of the humanitarian crisis facing the region. According to the UN there are at least 400,000 people living under siege in 15 towns across Syria. Doctors Without Borders estimate that 28 people have died of starvation in Madaya alone since the beginning of December 2015, with more than 250 people suffering from severe acute malnutrition.

On Thursday, UN Secretary-General Ban Ki-moon warned that the use of starvation as a weapon in Syria was a war crime.

Mehdi Hasan speaks to Sarah Leah Whitson, one of the foremost experts in the region and the executive director of Human Rights Watch’s Middle East and North Africa division, about the use of starvation as a weapon of war.

A woman who died of Ebola this week in Sierra Leone potentially exposed at least 27 other people to the disease, raising the risk of more cases just as the deadliest epidemic on record appeared to be ending. The World Health Organization confirmed on Friday a new death from Ebola in Sierra Leone just a day after west Africa celebrated the end of an outbreak which killed 11,000 people. A 22-year-old woman was taken ill, near the Guinean border on Thursday last week and died on Tuesday, local health officials confirmed she was killed by Ebola. The new case in Sierra Leone is especially disquieting because authorities failed to follow basic health protocols, according to the report. Sierra Leonians have expressed their disappointment at this latest turn of events.

Will Hydrogen Be the Fuel of the Future? Cars, Economy, Facts, Energy (2002)

Jeremy Rifkin (born January 26, 1945) is an American economic and social theorist, writer, public speaker, political advisor, and activist. Rifkin is the author of 20 books about the impact of scientific and technological changes on the economy, the workforce, society, and the environment. His most recent books include The Zero Marginal Cost Society (2014), The Third Industrial Revolution (2011), The Empathic Civilization (2010), The European Dream (2004), The Hydrogen Economy (2002), The Age of Access (2000), The Biotech Century (1998), and The End of Work (1995).

After the publication of The Hydrogen Economy (2002), Rifkin worked both in the U.S. and Europe to advance the political cause of renewably generated hydrogen. In the U.S., Rifkin was instrumental in founding the Green Hydrogen Coalition, consisting of thirteen environmental and political organizations (including Greenpeace and MoveOn.org) that are committed to building a renewable hydrogen based economy.[23] His 2004 book, The European Dream, was an international bestseller and winner of the 2005 Corine International Book Prize in Germany for the best economics book of the year.[24][25]

Rifkin is the principal architect of the Third Industrial Revolution long-term economic sustainability plan to address the triple challenge of the global economic crisis, energy security, and climate change.[26] The Third Industrial Revolution was formally endorsed by the European Parliament in 2007 and is now being implemented by various agencies within the European Commission.[27] Rifkin has lectured before many Fortune 500 companies, and hundreds of governments, civil society organizations, and universities over the past thirty five years.

In 2011, Rifkin published The Third Industrial Revolution; How Lateral Power is Transforming Energy, the Economy, and the World. The book was a New York Times best-seller,[29] and has been translated into 19 languages. By 2014, approximately 500,000 copies were in print in China alone.

Rifkin delivered a keynote address at the Global Green Summit 2012 on May 10, 2012. The conference was hosted by the Government of the Republic of Korea and the Global Green Growth Institute (GGGI), in association with the Organisation for Economic Co-operation and Development (OECD) and United Nations Environment Programme (UNEP). President Lee Myung-bak of South Korea also gave a speech at the conference and embraced the Third Industrial Revolution to advance a green economy.[30]

In December 2012, Bloomberg Businessweek reported that the newly elected premier of China, Li Keqiang is a fan of Rifkin and had “told his state scholars to pay close attention” to Rifkin’s book, The Third Industrial Revolution.[31]

Rifkin received the America Award of the Italy-USA Foundation in 2012.[32] He currently works out of an office in Bethesda, Maryland, a suburb of Washington, D.C.

Documentary filmmaker and former Flint resident Michael Moore returned to his hometown to call for President Barack Obama to come see the water crisis for himself. (Jan. 16)

Jill Stein on Bernie Sanders and the ‘Lesser Evil’ Argument

Cole Mellino | January 15, 2016 10:41 am | Comments
Jane Goodall is one of the world’s leading voices on climate change and environmental conservation. Amy Goodman of Democracy Now! had the chance to catch up with Goodall at the Paris climate summit last month.

A renowned primatologist, best known for her groundbreaking work with chimpanzees and baboons, Goodall was at the summit to talk about saving the rainforest as a way to mitigate climate change. She shared with Goodman her thoughts on climate denial among the GOP presidential candidates, particularly Donald Trump. She offered some of her insights into why the world’s rainforests are being destroyed at an unprecedented rate, why she chose to be a vegetarian and ways in which we can all reduce our impact on the Earth.

The world is warned to prepare now for health crises such as the Ebola outbreak, or pay a lot more later. 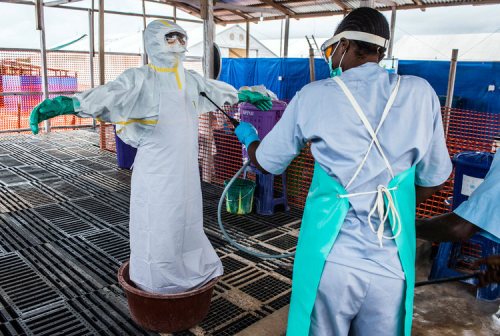 In October 2000, an Ebola outbreak was detected in Gulu, Uganda. The virus spread across the country, infecting 425 people and killing more than half of them. It was a wakeup call for the African nation, though apparently not the rest of the world.

Uganda responded by creating systems to spot epidemics in the making. “Village health teams” were made responsible for monitoring a few dozen households apiece, as well as building labs so specimens could be tested in 24 hours. While an Ebola outbreak seven years later took weeks to investigate, by 2011 Ugandan authorities were responding in a day or two, keeping deaths to a minimum.

The world needs a similar transformation to prevent outbreaks of infectious disease that threaten security and economic stability, according to a report (PDF) sponsored by several major foundations. Pandemics—epidemics that spread across the globe—could cost humanity $6 trillion in the 21st century, or $60 billion a year, the authors estimate. They argued for investing $4.5 billion a year—or 65 cents for every resident of the planet—to prepare.

“There are very few threats that can compare with infectious diseases in terms of their potential to result in catastrophic loss of life,” the report states. “Yet nations devote only a fraction of the resources spent on national security to prevent and prepare for pandemics.”

The document, commissioned by such heavy hitters as the Paul G. Allen Family Foundation, the Ford Foundation, and the Bill & Melinda Gates Foundation, was written by 17 academics, policymakers, and nonprofit and industry leaders from across the globe. Threaded through its acronym-filled bureaucratese is a politely scathing assessment of the World Health Organization, particularly its handling of the most recent Ebola outbreak in West Africa. That epidemic is only now coming to an end, after almost two years and 11,000 dead.