Kochs and ALEC Team Up To Protect White Collar Criminals

The Koch brothers have been making criminal justice reform a centerpiece of their lobbying efforts, but don’t be fooled into thinking that they actually care about the fact that our prisons are being packed. Instead, the Kochs are trying to make it more difficult for white collar criminals to be prosecuted.

Ring of Fire’s Farron Cousins discusses this with Brendan Fischer, the general counsel for the Center for Media and Democracy.

Noam Chomsky Passionate Speech on the Hypocrisy of US Foreign Policy

DiCaprio: The Climate Change Debate Is Over

As TransCanada files a NAFTA claim for $15 billion against the U.S. government over the rejection of the Keystone XL pipeline, we turn to another case in which massive trade agreements have infringed on the U.S. government’s ability to pass legislation. In December, Congress passed a spending bill that included a repeal of a law requiring meat to be labeled with its country of origin. The repeal of the legislation came after the World Trade Organization threatened to impose billion-dollar sanctions against the United States, saying the label law violated trade deals. According to Lori Wallach of Public Citizen’s Global Trade Watch, this type of infringement is just the beginning if the Trans-Pacific Partnership is approved.

TransCanada Sues the U.S. for $15B for Rejecting Keystone XL. Will This Be the New Normal Under TPP?

The secretive trade pact between the United States and 11 Pacific Rim nations could govern up to 40 percent of the world’s economy. After TransCanada announced its lawsuit on Wednesday, the group Friends of the Earth released a statement saying, “This is why Friends of the Earth opposes the Trans-Pacific Partnership and other trade agreements, which allow companies and investors to challenge sovereign government decisions to protect public health and the environment.” For more, we’re joined by Lori Wallach, the director of Public Citizen’s Global Trade Watch.

Sustainable agriculture is at the core of Monsanto. We are committed to developing the technologies that enable farmers to produce more crops while conserving more of the natural resources that are 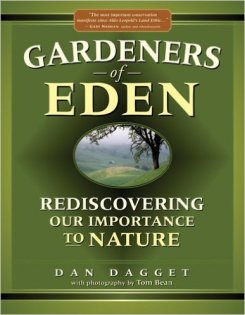 Dagget’s ideas fly in the face of our culture’s ancient assumption that humans are separate from nature and of current notions that the best way for us to protect the land is to leave it alone. He demonstrates case after case of positive human engagement in the environment and of managed ecosystems and restored areas that are richer, more diverse, and healthier than unmanaged ones.

Much of pre-Columbian America, he contends, was not a pristine wilderness but an ancient garden managed over millennia by native peoples who shaped the plant and animal communities around them to the mutual benefit of all. What Dagget is proposing is a radical change in the way we define land health and the ways this health can be achieved. Rather than leaving the land alone, he recommends a new kind of environmentalism based on management, science, evolution, and holism, and served by humans who enrich the environment even as they benefit from it.

In this way, we humans can resume our ancient role as gardeners and stewards of our world, reviving damaged land, facilitating the return of native species, restoring the land’s ability to absorb and store water and carbon. Dagget’s new environmentalism offers hopeful solutions to the current ecological crisis and a new purpose for our human energies and ideals. This book is essential reading for anyone involved with the earth and anyone seeking a viable way for our burgeoning human population to continue to live upon it.