What Nobody Told You About Happiness. | Saisha Srivastava

Published on Oct 19, 2015
Saisha has danced since she was a little girl. In a breath of fresh air that is as inspiring as it is poetic, she talks about growing up and shares stories from teaching dance to blind and visually challenged students, and the startling secret she learnt about happiness along the way.

Saisha Srivastava is a 20-year old student at Vassar College, New
York. She was born and raised in Kolkata, India. She is a dancer,
formally trained in jazz and ballet. She is also the founder of 20
Days of Rain, a project aimed at spreading happiness through dance.
Tying up with schools for blind and visually impaired students, she
and her group of instructors hope to bring positivity into the lives
of visually challenged youth, one dance workshop at a time.
Pursuing her Bachelor’s degrees in Economics and Chinese, Saisha has
been a research associate with the Centre for Studies in International
Relations and Development (CSIRD), India, and is currently interning
with a financial consultancy firm in Shanghai, China.

Lawrence Lessig, “Republic, Lost: The Corruption of Equality and the Steps to End”

Harvard Law Professor and former Democratic presidential candidate Lawrence Lessig talks about his experience running for president and campaign finance, the central theme of his campaign and his book “Republic Lost: The Corruption of Equality and the Steps to End It.”

While representatives from nearly 200 nations gathered inside the COP21 on Saturday to hammer out the final details of the climate agreement, climate justice activists and civil society groups took to the streets of Paris near the Arc de Triomphe to say the agreement doesn’t do enough to roll back the effects of climate change. “The Paris Agreement is a death sentence for many people,” says Pablo Solón, former climate negotiator for Bolivia. “A world with temperature increases more than 3 degrees Celsius is a world where not everyone will survive.”

A Turning Point for the Climate or a Disaster? Michael Brune vs. George Monbiot on the Paris Accord 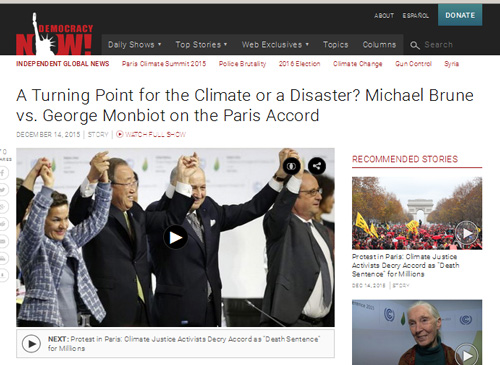 In what’s been described as a historic turning point, nearly 200 nations agreed in Paris Saturday to a global accord to rein in rising greenhouse gas emissions blamed for warming the planet. The accord was reached at the conclusion of the two-week U.N. climate change conference, known as COP21. Under the deal, nations will make voluntary commitments to begin cutting emissions. In addition, the deal provides billions more dollars to help poor nations cope with the transition to a greener economy powered by renewable energy.

“What we saw in the last two weeks was that every country around the world agreed we have to do much, much more to fight climate change effectively, and to begin to set up a dialogue and mechanism for rich countries to aid the poor countries, and to make room for continuous ambition moving forward,” says Michael Brune, executive director of the Sierra Club and author of “Coming Clean: Breaking America’s Addiction to Oil and Coal.”

But climate justice activists disagree on how effective the agreement will be in rolling back the effects of climate change. “What I see is an agreement with no timetables, no targets, with vague, wild aspirations,” says British journalist and author George Monbiot, columnist with The Guardian and author of the 2006 book, “Heat: How to Stop the Planet from Burning.” “I see a lot of backslapping, a lot of self-congratulation, and I see very little in terms of the actual substance that is required to avert climate breakdown.” We speak with both Brune and Monbiot about the agreement.

The IPCC at a Crossroad: Opportunities to Reform. A Talk of Hoesung Lee – Chair of the IPCC

How our view from space is changing the world | Scott Larson

Published on Dec 14, 2015
With beautiful imagery taken from space, Scott Larson explains the importance of our view from the heavens; the acknowledgement and rapid understanding of global change. Recorded at TEDxVancouver at Rogers Arena on November 14, 2015.

Published on Dec 14, 2015
It’s a fresh view of Earth. Less than a year after its launch on the Deep Space Climate Observatory (DSCOVR), NASA’s onboard camera is taking images of the entire sunlit side of Earth every two hours.

World Bank: Climate literacy – a must for businesses

Jim Yong Kim, the president of the World Bank, hits back at critics of the Paris agreement on climate change.He told Al Jazeera that businesses arount the world need to become climate change literate.”I would encourage every single business in the world, if they haven’t done it already, to become climate change literate,” he said. “There is not a business in the world can efford to ignore climate change. The investment strategies are going to change, the things we invest in are going to change.”The World Bank has already pledged $6bn for building climate resilient infrastructure, Kim said.”We think that we need $10bn more than that,” he said.

The world is warming at a dangerous rate, and the EU is still pushing weak, inadequate policies that give us a 50/50 chance of overshooting the 2°C limit – with devastating consequences for people and planet.