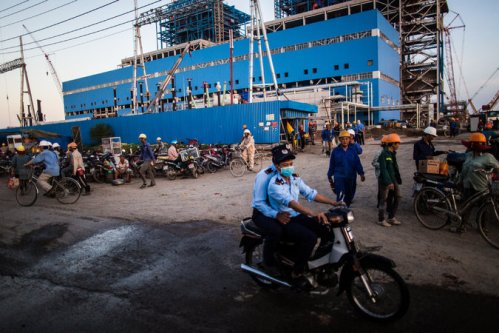 The Duyen Hai complex in Tra Vinh Province is one of several coal-fired power plants that Chinese firms are building in Vietnam. Credit Christian Berg for The New York Times

The plant is one of a pair that have begun operating in the past five years in this village near the Vietnamese port city of Haiphong. A Shanghai firm completed work on a third plant this year by the old border that separated north from south during the Vietnam War. And another major plant financed by Chinese loans is under construction on the Mekong River Delta south of Ho Chi Minh City.

Altogether, Chinese engineering firms have built or signed contracts to build 14 coal-fired plants along the Vietnamese coast over the past five years, most of them with the help of loans from the government’s China Export-Import Bank.

The building spree here is hardly unique. Since 2010, Chinese state enterprises have finished, begun building or formally announced plans to build at least 92 coal-fired power plants in 27 countries, according to a review of public documents by The New York Times.