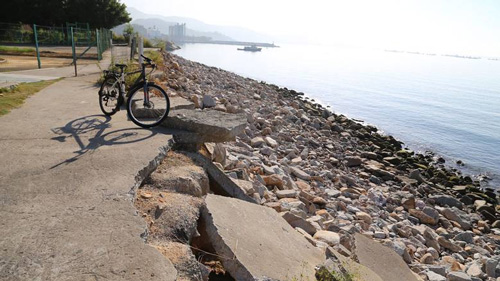 Rising seas have eroded part of the coast in China’s southern Guangdong province, which has been a principal source of China’s economic growth in recent decades. Losses last year from ocean disasters in Guangdong are estimated to be more than $1-billion.

Rising seas have eroded part of the coast in China’s southern Guangdong province, which has been a principal source of China’s economic growth in recent decades. Losses last year from ocean disasters in Guangdong are estimated to be more than $1-billion.

As rising water levels along the Guangdong coast threaten to create havoc in its economic heartland, China’s leadership is recognizing the country’s increasing vulnerability to climate change, Nathan VanderKlippe reports

At Pleasant Banyan Bay in China’s southern Guangdong province, couples flock by the dozens for elaborately staged wedding photos on the white sand. Large signs on a nearby hotel shout, “Forever.”

But the love on display here might outlast the sand. A rising sea has narrowed the main beach by 10 metres and scoured around trees, exposing their roots. Smaller beaches on the fringes of the bay have already vanished.

“I know the glaciers and the poles are melting and that’s why the water is rising,” said Chen Hong, 48, a lifeguard who has worked on this beach since 2000. Watching the water slowly creep upward has made him a pessimist.

“With the sea level rising so much, water is going to occupy a lot of land,” he said. “Earth may have given birth to humans. But it seems like, in the end, humans will destroy the Earth.”

No country on Earth has more people at risk from the sea-level rise than China, where 85 million people live on land that will either be flooded or at risk of inundation in the future, according to an analysis based on a six-metre sea-level rise published in Science this year.

A 900-page Chinese climate science report released recently points to sea levels as one of the chief risks to the country, saying some coastal “cities may even face risks of massive disasters that are hard to forecast.”

And Guangzhou, the capital of Guangdong province, will experience greater losses than any other major global city, the World Bank has warned. The sprawling industrial complex now rooted in the region’s Pearl River Delta has been a principal source of China’s enormous new wealth in recent decades. But what has proved fertile land for development has also come laden with the risk of floods. Most of the delta lies within a metre of sea level. About 13 per cent lies below sea level – not far off the 26 per cent in the Netherlands.

BBC World Service – Newshour, Can You Have Both Growth and CO2 Emission Cuts?

Chinese President Xi Jinping said China will establish an assistance fund for south-south cooperation with an initial pledge of $2 billion (€1.79 billion) in support of developing countries implementation of the post 2015 development agenda as he spoke to the United Nations General Assembly, Saturday.

Prime Minister Narendra Modi today said climate change was a major global challenge, but it was not something India was responsible for. India, he said, is facing the consequences – from depletion of glaciers and coastlines to the risk to farmlands and farmers. The Prime Minister was addressing a gathering at the opening of the India pavilion at the United Nations climate summit in Paris.

A leaked recording of behind-the-scenes negotiations between world leaders at the Copenhagen climate summit in December has revealed bad-tempered exchanges and clear frustrations from Europeans at what they saw as intransigence by the Chinese.

Copyright: Der Spiegel
The recording published on the website of German magazine Der Spiegel offers an extraordinary glimpse of the battle taking place between leaders including Barack Obama, Gordon Brown, Angela Merkel and Nikolas Sarkozy, and Chinese and Indian negotiators who were determined to resist a treaty that includes binding emissions reduction targets.

China gets blunt at Copenhagen summit

Even as the world powers try to hammer out a contract at the climate summit, the tempers in Copenhagen are running high. In a rather harsh use of language Chinese vice foreign minister has called US climate negotiator extremely irresponsible.

Xie Zhenhua, vice-minister of China’s National Development and Reform Commission, argued that wealthier nations should increase financial and technological support for the efforts of developing nations to control greenhouse gas emissions. Xie also claimed that China has a proven record of implementing initiatives to reduce emissions and has made further commitments in the service of this aim.