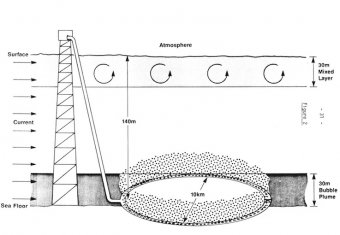 Throughout the 1980s, the company struggled to solve the carbon problem of one of the biggest gas fields in the world out of concern for climate impacts.

After Exxon got the rights to develop the Natuna gas field, company researchers determined that the project site was contaminated with much more carbon dioxide than normal. This picture is from one of the company’s documents exploring how to address the carbon dioxide issue.

In 1980, as Exxon Corp. set out to develop one of the world’s largest deposits of natural gas, it found itself facing an unfamiliar risk: the project would emit immense amounts of carbon dioxide, adding to the looming threat of climate change.

The problem cropped up shortly after Exxon signed a contract with the Indonesian state oil company to exploit the Natuna gas field in the South China Sea—big enough to supply the blossoming markets of Japan, Taiwan and Korea with liquefied natural gas into the 21st century.

Assessing the environmental impacts, Exxon Research and Engineering quickly identified Natuna’s greenhouse gas problem. The reservoir was contaminated with much more carbon dioxide than normal. It would have to be disposed of somehow—and simply venting it into the air could have serious consequences, Exxon’s experts warned.

Exxon’s dawning realization that carbon dioxide and the greenhouse effect posed a danger to the world collided with the company’s fossil fuel ambitions.

“They were being farsighted,” recalled John L. Woodward, who wrote an internal report in 1981 on Natuna’s climate implications. 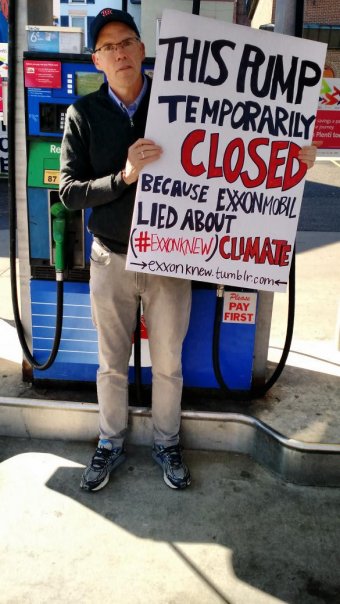 Revelations that the energy giant knew about climate change and obstructed policy prompted him to get himself arrested in protest.

Climate activist Bill McKibben has already written editorials about recent revelations that ExxonMobil had deep knowledge of climate change as far back as the 1970s. He had taken to social media to spread the word. But last week, he felt that wasn’t enough and decided to protest and get himself arrested at an ExxonMobil station in Burlington, Vt.

That’s how angry McKibben was that the energy giant had known for four decades that burning fossil fuels was changing the earth’s climate—and then chose to ignore it and fund efforts to deny it.

The findings were reported in two separate investigations by InsideClimate News and the Los Angeles Times into how much Exxon knew about climate change and when.

The stories “change the accepted narrative of the fight I’ve spent almost my whole adult life engaged in,” McKibben, co-founder of the environmental organization 350.org, told InsideClimate News the day after his arrest. “Had Exxon been forthright in the late 80s or early 90s, they could have short-circuited the faux debate we’ve been engaged in all these decades. They were the ones that had the unique credibility to do it.”

It’s time for the entire country to do what a growing number of towns and states are doing – re-name Columbus Day.

Bill McKibben : Exxon Knew Everything There Was to Know About Climate Change by the Mid-1980s—and Denied It 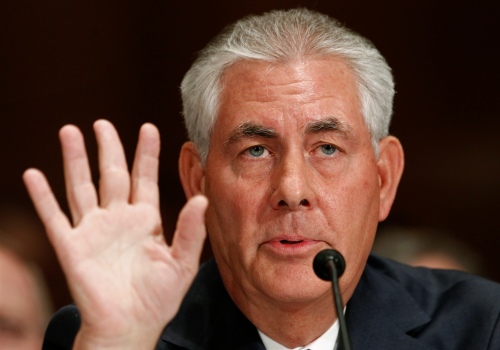 A few weeks before the last great international climate conference—2009, in Copenhagen—the e-mail accounts of a few climate scientists were hacked and reviewed for incriminating evidence suggesting that global warming was a charade. Eight separate investigations later concluded that there was literally nothing to “Climategate,” save a few sentences taken completely out of context—but by that time, endless, breathless media accounts about the “scandal” had damaged the prospects for any progress at the conference.

The Shock Doctrine takes an in-depth look into “disaster capitalism”, analysing how such an ideal has asserted itself as a dominant presence in politics and society.
The film traces the doctrine’s beginnings in the radical theories of Milton Friedman, and its implementation in countries and situations as disparate as Pinochet’s Chile, Thatcher’s Britain, and most recently the neo-con invasions of Afghanistan and Iraq. It will expose the darker side of Friedman’s ideology, which could only be implemented through the use of torture and repression.