Instead of losing ice where massive glaciers meet the sea, Greenland now sends meltwater rushing into the ocean via a vast network of lakes and rivers, according to several studies. The results do not mean that glaciers have stopped their speedy flow, only that surface melting now exerts a more powerful influence on ice loss, researchers said.

“We no longer see giant icebergs calving” from glaciers, releasing ice into the sea, said Lora Koenig, a glaciologist at the National Snow and Ice Data Center, who led one of the new studies. “The majority of water is coming from surface melt.
Greenland, one of the largest ice sheets in the world, is melting. In fact, it is melting ahead of schedule as the world warms. Scientists are working hard to deepen their understanding of this ice sheet’s behavior so that we can predict how fast and how much of the ice sheet will melt in the coming decades and centuries.

It might seem obvious that in a warming world, the Greenland ice sheet will melt. But, what seems obvious and simple can be more complex when investigated more deeply. With respect to Greenland, it is expected that warmer temperatures increase melting but warmer temperatures can also mean more snowfall, as there is more moisture in warm air which can then fall as snow. So, it has been a question of which of these two competing processes would win out. Would Greenland get smaller because of melting or would it grow as more snow fell?

Over the past few years, the verdict has become clear. The Greenland ice sheet is losing mass at an increasing rate. In fact, Greenland currently contributes twice as much as the Antarctic to rising sea levels.

A new study, just published in Nature Geoscience, makes an important new contribution to our understanding of the forces at play in Greenland. Dr Samuel Doyle and an international team captured the wide-scale effects of an unusual week of warm, wet weather in late August and early September, 2011. They found that weather cyclonic led to extreme surface runoff – a combination of ice melt and rain – that overwhelmed the ice sheet’s basal drainage system. This drive a marked increase in ice flow across the entire western sector of the ice sheet that extended 140 km into the ice sheet’s interior.

The cyclonic weather system delivered heat and rain to the western edge of the Greenland ice sheet and under these warm, wet, cloudy conditions the way that the ice sheet receives energy for melt is very different to that under the more typical clear sky conditions. As we all know from a cloudy day, clouds block a certain amount of sunshine, but under certain conditions they can absorb the outgoing longwave radiation and re-radiate it back to the surface. This is why a cloudy night is often warmer than when the sky is clear. The same thing happens on the ice sheet.

In fact during the August 2011 weather event, melt continued throughout both day and night creating exceptionally high daily melt totals for this time of year. Moisture in the atmosphere also reduces the rate at which the air cools as it rises over the ice sheet, allowing warm temperatures and therefore melt and rain to attain abnormally high elevations. The heat released by condensation and by rain refreezing in the snowpack enhanced melt even further.

Even given these factors, the water runoff from melt and rain did not exceed mid-summer peak values when ice flow was relatively slow. This is because the ice sheet’s drainage system continually adapts to melt inputs: in mid-summer an efficient drainage system forms and the ice sheet can easily accommodate high water inputs. This isn’t the case in late summer though, as the drainage system rapidly freezes shut when air temperatures fall below zero.

The influence of such intense rainfall events has not, until now, been considered in assessments of the melt and flow response of any ice sheet. This is an important omission because cyclonic conditions are predicted to increase in the future, therefore likely playing an increasing role in driving ice mass loss from the Greenland ice sheet.
Since the 1980s when rainfall measurements began in the west Greenland town of Kangerlussuaq, the focus of the study, the proportion of precipitation now falling as rainfall rather than snow has both increased and extended into the late summer and autumn in line with increased circulation and moisture availability within a warmer, more energetic atmosphere.

Want To Know How Sea Level Rise Will Impact Your Hometown? There’s A Map For That 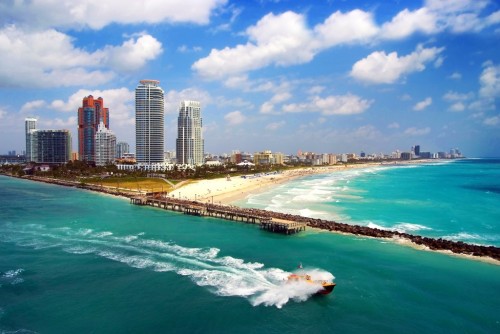 Is it too late to save Miami from sea level rise?

If you want to know whether your city has the potential to be underwater due to rising sea levels, there’s now a map for that.

In conjunction with research published Monday in the Proceedings of the National Academy of Sciences, Climate Central launched ‘Mapping Choices,’ an interactive tool that lets users compare sea level rise in different cities based on various carbon scenarios, from aggressive carbon cuts to unchecked pollution.

This is a story that can have different endings, and the endings depend on what we do

“I think we read a lot of projections about future temperature increases or impact, but it can be hard to understand what they really mean,” Ben Strauss, vice president for sea level and climate impacts at Climate Central and lead author of the study, told ThinkProgress. “We wanted to do a research project that would literally give people a picture, or a map, of the different outcomes that we could see. This is a story that can have different endings, and the endings depend on what we do.”

If left unchecked, carbon pollution could lead to between 14 and 33 feet of long-term global sea level rise, the study found. That magnitude of sea level rise would threaten to submerge land that is currently home to between 20 and 31 million Americans, including at least 20 major U.S. cities with more than 100,000 residents. With aggressive carbon cuts, the study found, half of these cities could be spared from rising seas — but major cities like New Orleans and Miami are likely to be permanently threatened by rising sea level even with aggressive action on climate change.

“Many cities have features that depend on our energy path, but some appear to be already lost,” Strauss said. “It is hard to imagine how we can defend South Florida in the long run. It is hard to imagine how we can defend New Orleans in the long run.”To understand how carbon emissions will impact sea level rise, the researchers essentially combined two well-established lines of research — one relating to carbon emissions and global warming, and another relating warming to long term sea level rise. After combining those lines of research in what Strauss referred to as a “statistically appropriate way,” the researchers were able to build a relationship between how much carbon is emitted into the atmosphere and how much sea levels can be expected to rise. The researchers then applied that relationship to coastal topography maps, and, using census data and information about historic high tide lines, mapped the areas that would be inundated, under different carbon emission scenarios, in the future.

135 Years of Global Warming in 30 seconds

An amazing 30-second animation from our friends at NASA, depicting how temperatures around the globe have warmed since 1800.

If more people knew what was in TPP deal, they’d be outraged – labor advocate

President Barack Obama’s Trans-Pacific Partnership, better known as TPP, is attracting more scrutiny from labor and trade advocates who are concerned about the agreement’s text, which was hammered out mostly in secret. Manila Chan speaks with Adam Weissman from Trade Justice New York about outstanding questions regarding the deal.

In 2015, France will be hosting and presiding the 21st Session of the Conference of the Parties to the United Nations Framework Convention on Climate Change (COP21/CMP11), otherwise known as “Paris 2015” which will take place in Paris-Le Bourget from 30th of November to 11th of December 2015.

‘Out of Control’ Inequality: Global One Percent Owns Half of World’s Wealth

Credit Suisse estimates that the number of global millionaires will probably increase 46 percent to 49.3 million over the next five years. (Photo: epSos.de/flickr/cc)

The top one percent of households “account for half of all assets in the world,” according to a new report from a leading multinational bank.

The 2015 Credit Suisse Global Wealth Report puts worldwide wealth inequality at a level “possibly not seen for almost a century,” the researchers write. The data also reveals a declining middle class and that the poorest half of the world’s population owns just one percent of its assets. Meanwhile, the number of “ultra-wealthy” people continues to climb.

“The ‘trickle up’ economic model is working its magic for the super rich at the expense of the rest.”
—Claire Godfrey, Oxfam

Credit Suisse’s analysis is in line with a warning from the international humanitarian group Oxfam, issued earlier this year, that the richest one percent of people on the planet would own at least half of the world’s wealth by 2016.

“The Credit Suisse report shows that inequality is growing faster than we had thought,” said Claire Godfrey, global inequality policy lead for Oxfam. “The fact that it has happened this year underlines the urgency of the problem.”

Furthermore, Godfrey said, the report illustrates how “the ‘trickle up’ economic model is working its magic for the super rich at the expense of the rest. This is bad news for global economic growth and bad news for democracy. Our political leaders must take action now to raise the incomes of the poor and maintain the incomes of the middle class.”

A new report by Credit Suisse says the wealthiest 1 percent of the world’s population now controls 50 percent of total global wealth. This is the most extreme concentration of wealth the bank has ever recorded. In contrast, the report shows average household wealth has fallen 17 percent in Latin America and 12 percent in Europe, amid austerity programs.

A new investigation has revealed more information about Exxon’s decades-long bid to conceal what it knew about global warming. The Los Angeles Times reports Exxon predicted in the late 1980s and early 1990s the Arctic would melt from climate change, reducing their operations costs by as much as 50 percent. A senior ice researcher for Exxon’s Canadian subsidiary told an audience of academics and government researchers in 1992, “potential global warming can only help lower exploration and development costs” in the Beaufort Sea.

The Rise of America’s Secret Government: The Deadly Legacy of Ex-CIA Director All en Dulles

Democracynow.org – It’s been more than 50 years since Allen Dulles resigned as director of the CIA, but his legacy lives on. Between 1953 and 1961, under his watch, the CIA overthrew the governments of Iran and Guatemala, invaded Cuba, and was tied to the killing of Patrice Lumumba, Congo’s first democratically elected leader. We speak with David Talbot, author of “The Devil’s Chessboard: Allen Dulles, the CIA, and the Rise of America’s Secret Government,” about how Dulles’ time at the CIA helped shape the current national security state.