Farmers are working hard at harvest right now to grow enough food for everyone sustainably. Learn more about corn harvest in this video. 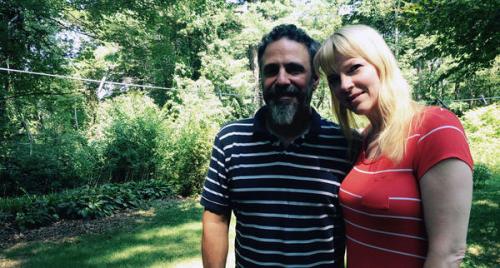 Mike and Linda Gioscia remember how anxious their son Ethan used to be when he was a toddler.

“Just bringing him places he would have these meltdowns,” Mike Gioscia said. “He didn’t know what to expect. It took us a long time to realize this — I was like ‘We’re just going to Stop and Shop — what are you afraid of? What’s wrong?'”

Doctors diagnosed Ethan with a form of autism — and suddenly Mike and Linda found themselves searching for answers.

Other parents suggested the Gioscias change Ethan’s diet, so they began to scrutinize everything they fed him. First they cut out sugar. Then they switched to all organic food. Next they started researching genetically modified organisms [GMOs] — crops engineered with spliced genes to make them more resilient, or just bigger. The majority of corn and soybeans consumed in the U.S. today are GMOs.

The information Mike and Linda found was overwhelming, unclear, and confusing, so they made their own call. Even without scientific evidence of harm, they decided to cut out GMOs.

“Now we’re at the point where all the answers come from us,” Mike said.

But deciding to cut out GMOs and actually being able to do it are two different things. It can be hard to tell what food was genetically modified. Most companies don’t list GMOs on food labels. But parents like the Gioscias are forcing the issue.

In Athol, Learning The Rhythm Of Farm Life

The Farm School in Athol, Massachusetts is a 25 year-old training program where lawyers, teachers, and others learn the ins and outs of farming — and possibly — find a new career.

A year ago, Nick Martinelli, 36, decided to quit a high profile legal job.

“I definitely romanticized the idea of farming before I came here. And the idea of coming here was to test that. And to see whether the reality matched up,” he said. “Slowly over time I realized that I didn’t have a lot of practical skills. That if I weren’t in front of a computer, I didn’t know how to do a lot of things. And I wanted to rectify that.”

For the past year Martinelli has been enrolled in the school’s Learn to Farm program.

“It’s obviously very different from what I was doing, being in an office,” he said.

The desire to get back to the land is something the Farm School’s manager, Patrick Connors, sees more and more.

New England Can’t Compete With Other Food Growing Regions. Or Can It?

The northeast is a terrible place to be a farmer.

Somehow, Allandale Farm has hung on since before the United States was a country. John Lee, who manages the farm for the Allandale family, looks out on Allandale’s rows of vegetables, but sees mostly stones.

“This is New England,” Lee said. “We grow stones.”

Those stones are part of the reason why, today, nearly all of the food people in New England eat is grown someplace else — in far-off places like California. The system is working for now, but in the future, those faraway farms may not be as reliable, and their produce may not be as affordable. That may create an opening for New England farms to start producing more of our food for the first time in 200 years.

To explore the constellation of issues that revolve around the food we eat, WGBH News has partnered with The American Academy of Arts and Sciences to produce a special five-part series. This is the first installment.

Once, in the mid-1800s, New England had almost 250,000 farms. The region could feed itself until farmers went south to fight in the Civil War — and discovered that soil elsewhere wasn’t riddled with rocks.

“These young men just went off to war and saw what the economic opportunities were, and a lot of them didn’t come back,” Lee said.

Greater Boston Video: Making The Leap From The Boardroom To The Cornfield

Massachusetts is one of the few states that’s seen an increase in the number of working farms in recent years, and The Farm School in Athol is helping aspiring farmers make the leap from the boardroom to the cornfield.

Hospitals are finding the right medicine in locally grown foods 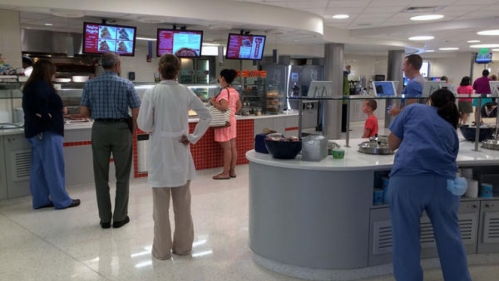 Workers browse the cafeteria at Children’s Hospital in Boston, Mass.

But if a hospital wants to be on the cutting edge of healthcare, says hospital manager Paul O’Connor, it also has to focus on the most nutritious food possible — local food.

“If you’re going to be called No. 1 in the world from a pediatric perspective, you better be doing it from a food perspective too,” O’Connor says.

So five years ago, the hospital decided to go as local as possible. The problem, O’Connor says, was the hospital couldn’t just switch. Children’s gets its food from big distribution companies, which in turn rely on national contractors who can deliver a lot of food at once.

Now the hospital is, pardon the pun, turning the tables. Children’s is working with other hospitals to force food distributors to buy in new ways. For the last five years the hospitals have coordinated to demand more local food products. The change is good news for local farmers and fishermen who have been locked out the market for big local companies and institutions that buy vast amounts of food in bulk.

Stacia Clinton, New England regional director for the group Health Care Without Harm, who helps the hospitals collaborate, says half of all New England hospitals are participating in the effort.

The Last of the Kawahiva

In the Brazilian Amazon, a tiny group of uncontacted Indians teeters on the brink of extinction. Survival’s global campaign is pushing Brazil’s government to protect their land – the only way they can survive.

This film, narrated by Mark Rylance, contains unique footage of the Kawahiva filmed by government agents in 2011, during a chance encounter with the Indians.

If enough of the world’s population does not awaken to the reality of false flags and other deceits propagated by the powerful, and in turn confront these perpetrators, we are, in essence, inviting more of the same.

Editor’s Note: Frances Shure, M.A., L.P.C., has performed an in-depth analysis addressing a key issue of our time: “Why Do Good People Become Silent — or Worse — About 9/11?” The resulting essay, being presented here as a series, is a synthesis of both academic research and clinical observations.

In addressing the question in the title of this essay, the last segment, American Exceptionalism and Nationalist Faith, defined and drew a distinction between these two terms, demonstrated that in our historical era nationalist faith usually trumps Christian faith, and explained why those who are privileged by our economic and social system tend to be hesitant to accept the evidence that suggests 9/11 was a false flag operation.

Here, in this installment, we continue Ms. Shure’s analysis with Part 19: Government Manipulation and the Big Lie.

Often the people I speak with about 9/11 divulge the reasons they simply cannot “get their heads around” the assertion that it was perpetrated by government insiders. They have told me, variously, that this claim is “just too extreme,” that “no one in their right mind would have tried to pull something like this off,” and that “even if they had been crazy enough to think about or even plan such an evil deed, they would have been too scared to carry it out, because they would be lynched should they be found out.”