Japan has announced a major push to revive its nuclear energy program, just weeks before the third anniversary of the Fukushima Daiichi nuclear disaster. This comes just a week after it was revealed about 100 tons of highly radioactive water have leaked from one of the hundreds of storage tanks at the Fukushima nuclear power plant. Here in the United States, the Obama administration announced last week it approved $6.5 billion in loan guarantees to back construction of the country’s first new nuclear power plant in more than 30 years. This comes as a nuclear waste disposal site is set to reopen in New Mexico following an unexplained leak of radioactive material.

At a critical time for Japan and the region, DN! looks at the country’s rightward political shift under Prime Minister Shinzo Abe, who was re-elected just over a year ago. As head of the Liberal Democratic Party, Abe is known as a conservative hawk who has pushed nationalistic and pro-nuclear policies. In December, he visited the controversial Yasukuni war shrine, which honors Japanese soldiers who died in battle, including several war criminals who were tried by the International Military Tribunal after World War II. The visit sparked outrage from China and South Korea, who consider the shrine a symbol of Japanese militarism and its refusal to atone for atrocities committed in the first half of the 20th century. We speak about Japan’s increasingly pro-nuclear, nationalistic stance with Koichi Nakano, professor at Sophia University in Tokyo and director of the Institute of Global Concern.

Interview w/award-winning investigative journalist Karl Grossman on how the nuclear industry has gamed the media since before Hiroshima, why mainstream media continues to resist coverage of nuclear news, and thoughts on how to start breaking that logjam.
http://www.karlgrossman.com/
FREE KARL GROSSMAN BOOK (pdf): Cover Up: What YouAre Not Supposed to Know About Nuclear Power — For your FREE download, just click on Cover Up Sample
https://ia700802.us.archive.org/3/ite…

Cover Up: What You Are Not Supposed to Know about Nuclear Power: Karl Grossman

If people knew that the kind of accidents that happened at Three Mile Island, at the Fermi Reactor, at Browns Ferry, at Windscale, at “SL-1,” among others — the sort of huge catastrophes which have been only barely avoided — are to be expected, they’d be damned upset and would insist a stop be put to nuclear power. So an army of public relations practicioners has been working for decades to, in the jargon of the trade, make the people think of “Citizen Atom” as a friend, before the truth became manifest.

The “nuclear runaways” and “meltdowns,” the “China syndrome” would come, it was figured. So would the “routine” releases of radiation from nuclear plants — and their results: cancer, leukemia and genetic injury. Also to be expected were illness, injury and death in connection with mining, milling, fuel fabrication, transportation, reactor operation and storing waste — the basic steps of the entire nuclear “cycle.” 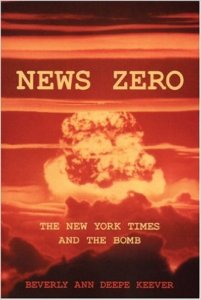 How did a world class newspaper become little more than a propaganda outlet for the U.S. government in its drive to cover up the dangers of radioactivity emanating from the testing of nuclear weapons? And why is it still offering warped coverage of the issues 40 years after the end of nuclear tests above ground? Hiding nearly half of the tests from public view, The New York Times’ stories predated by more than 40 years its recent crisis of made-up stories by reporter Jayson Blair.

Reporter Beverly Keever takes you inside our most prestigious propaganda machine to show just how the Times covered up the reality from half lies with half truths to supplying a complete alternative framework to manufacture consent.

Interview w/award-winning investigative journalist Karl Grossman on how the nuclear industry has gamed the media since before Hiroshima, why mainstream media continues to resist coverage of nuclear news, and thoughts on how to start breaking that logjam.
http://www.karlgrossman.com/
FREE KARL GROSSMAN BOOK (pdf): Cover Up: What YouAre Not Supposed to Know About Nuclear Power — For your FREE download, just click on Cover Up Sample
https://ia700802.us.archive.org/3/ite…
*
NUMNUTZ OF THE WEEK:
TEPCO double-header: Naohiro Masuda, newly appointed head of the Fukushima Daiichi “Decontamination and Decommissioning” Company, on cost-cutting measures which include eliminatingwhat?!?!????? from on-site workers? AND — TEPCO claims they can’t afford to keep providing stipends to Fukushima residents forced out of their homes and will cut them off next March. So how much did this genocidal company net last year? Hold onto your knickers…
(Full story on Masuda here: http://www.world-nuclear-news.org/WR-…
PLUS:
WIPP (Waste Isolation Pilot Plant) site in Carlsbad, New Mexico, shows damage to bags of magnesium oxide placed atop waste containers to stop radiation leaks.

Scott Portzline of Three Mile Island Alert offers a special invitation to participate in a webinar on NRC lies with Tim Judsonof NIRS, Eric Epstein of TMI Alert and himself.  …and if we could talk to the animals — meaning the fish/sea lions/sea birds/whales/owls/otters on the west coast of North America, they’d be really really pissed off at us about what the radiation from Fukushima is doing to them!

Chernobyl: A Million Casualties
A million people have died so far as a result of the 1986 Chernobyl nuclear plant accident, explains Janette Sherman, M.D., toxicologist and contributing editor of the book Chernobyl: Consequences of the Catastrophe for People and the Environment. Published by the New York Academy of Sciences, the book, authored by Dr. Alexey Yablokov, Dr. Vassily Nesterenko and Dr. Alexey Nesterenko, examined medical records now available–which expose as a lie the claim of the International Atomic Energy Commission that perhaps 4,000 people may die as a result of Chernobyl. Enviro Close-Up # 610 (29 mintes) http://blip.tv/envirovideo/chernobyl-…

THIS WEEK’S NUCLEAR
HOTSEAT:http://www.nuclearhotseat.com/Blog/
(CLICK TO ACCESS):
Nuclear Hotseat is the weekly international news magazine keeping you up to date on all things anti-nuclear. Produced and Hosted by Three Mile Island survivor Libbe HaLevy, each podcast contains the week’s international nuclear news, at least one expert interview, ways to protect physical health of yourself and your loved ones from the dangers of radiation exposure, and activist opportunities.

The Stream – Climate change in the Caribbean

On The Stream: A look at the impact of global warming in Trinidad and Tobago.