In January 2015, 15 students from Harvard Kennedy School and other graduate schools traveled to Jordan for a field study course to examine the public policy challenges associated with the inflow of the Syrian refugee population in Jordan.

This course, led each year by Professor Claude Bruderlein, Strategic Advisor to the President of the International Committee of the Red Cross, and supported by the Belfer Center’s Middle East Initiative, is designed to analyze strategic approaches for navigating the long-term challenges and dilemmas of some of the most complex political and humanitarian issues.

Students engage in experiential learning for three weeks, approaching the case as a means to further professional dialogue on complex issues, to build exchanges between Harvard University graduate students and practitioners in the region, and to shed light on the challenges of engaging in key dilemmas in the context of humanitarian action.

A new document leak reveals AT&T’s eagerness to collaborate with the National Security Agency on top secret projects, leading to a decade-long spying partnership. The leak shows AT&T handing metadata and phone records over to the agency. Manuel Rapalo has the latest information. 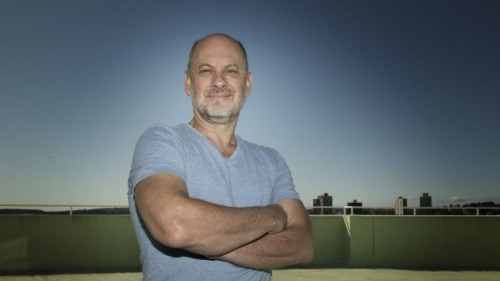 Hope isn’t a word that often comes to mind amid the rancour over climate change. But that’s the term Tim Flannery has chosen to sum up his latest assessment of our climate future.

In a new book the high-profile scientist “brings news of tools in the making” that could help avoid the climate catastrophe he has long warned about. The upbeat title – Atmosphere of Hope: Searching for solutions to the climate crisis – stems from Flannery’s investigation of nascent technologies with the potential to draw large amounts of carbon out of the atmosphere. There are no silver bullets, but together they provide grounds for optimism about humanity’s capacity to deal effectively with global warming. “It is possible the next decade will astonish us with the solutions that we discover to safeguard our planet for our grandchildren and their grandchildren,” he writes.

That’s not to say the world’s climate predicament has diminished. Speaking in Sydney to Fairfax Media this week, Flannery warns the challenge is “now gargantuan” and that deep, rapid cuts in greenhouse gas emissions are urgently required. “We need new tools because we’ve now been emitting carbon pollution at a worst-case scenario rate for a decade,” he said. “There is great inertia in the system that will carry us into increasingly dangerous climate territory.”

“Hey Bill Nye, Should We Throw Our Trash Into Space?”

Why don’t we just eject our trash into outer space?

“Hey Bill Nye, Should We Throw Our Trash Into Space?”

On this week’s Tuesdays With Bill, Rachel, a Columbia University student, asks two questions for the price of one: What would happen if a human being went the speed of light, and why don’t we just eject our trash into outer space?

Do you want to ask Bill a question for a future “Tuesdays with Bill?” Click here to learn how to submit: (http://goo.gl/Joiqzo).

Susan Gomes, Laura Biven, Anita de Waard, and Scott Edwards, Ph.D., discussed their experiences with funders and publishers. Interest in data management is growing from external partners of researchers. Funding agencies, interested in reducing duplication of funding, expanding the reach of the research they fund, and improving the ROI for funding initiatives are increasingly mandating data management practices of their investigators. Other stakeholders, such as publishers, are also increasingly interested in the sharing of data connected to research articles. This panel provided insights from funders and publishers on requirements for data management and sharing.

Susan Gomes, Laura Biven, Anita de Waard, and Scott Edwards, Ph.D., discussed their experiences with funders and publishers. Interest in data management is growing from external partners of researchers. Funding agencies, interested in reducing duplication of funding, expanding the reach of the research they fund, and improving the ROI for funding initiatives are increasingly mandating data management practices of their investigators. Other stakeholders, such as publishers, are also increasingly interested in the sharing of data connected to research articles. This panel provided insights from funders and publishers on requirements for data management and sharing.

Rick Luce, Ph.D. summarized the symposium and presented ideas for next steps.

Current El Niño Could Be Strongest on Record – Scientific American 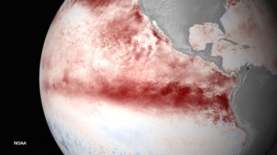 The strengthening climate phenomenon could have a big impact on U.S. weather

“We’re predicting that this El Niño could be among the strongest El Niños in the historical record dating back to 1950,” Mike Halpert, the deputy director of the Climate Prediction Center, part of the National Oceanic and Atmospheric Administration, said during a press teleconference.

Whether this is good news or bad news depends on where you are: For Californians, the prospect of a top-tier El Niño boosts the hopes for a wetter-than-average winter, which is desperately needed after four years of record-setting drought. For the Pacific Northwest, also mired in drought, El Niño usually means drier weather, though it could still be an improvement on last year.

El Niño is a cyclical climate phenomenon rooted in the tropical Pacific that features a buildup of warmer-than-normal waters in the central and eastern portions of the basin. Over the last few months, those waters have been steadily heating up. In July, temperatures in a key region were more than 2°F above average, a departure that comes in second only to the blockbuster El Niño of 1997-1998, the event by which all other El Niños are judged.

It’s possible this El Niño, which in the latest update was called “significant and strengthening,” could reach more than 3.5°F above normal in this ocean region, “a value that we’ve only recorded three times in the last 65 years,” Halpert said. That threshold was reached during the 1997-1998 event, as well as those from 1982-1983 and 1972-1973.

War in Space May Be Closer Than Ever – Scientific American 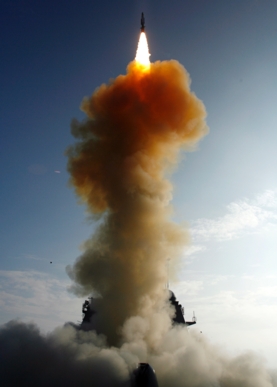 Anti-satellite missile tests, like this one conducted by the U.S. Navy in February 2008, are part of a worrisome march toward military conflict in outer space. U.S. Navy

China, Russia and the U.S. are developing and testing controversial new capabilities to wage war in space despite their denial of such work

The world’s most worrisome military flashpoint is arguably not in the Strait of Taiwan, the Korean Peninsula, Iran, Israel, Kashmir or Ukraine. In fact, it cannot be located on any map of Earth, even though it is very easy to find. To see it, just look up into a clear sky, to the no-man’s-land of Earth orbit, where a conflict is unfolding that is an arms race in all but name.

The emptiness of outer space might be the last place you’d expect militaries to vie over contested territory, except that outer space isn’t so empty anymore. About 1,300 active satellites wreathe the globe in a crowded nest of orbits, providing worldwide communications, GPS navigation, weather forecasting and planetary surveillance. For militaries that rely on some of those satellites for modern warfare, space has become the ultimate high ground, with the U.S. as the undisputed king of the hill. Now, as China and Russia aggressively seek to challenge U.S. superiority in space with ambitious military space programs of their own, the power struggle risks sparking a conflict that could cripple the entire planet’s space-based infrastructure. And though it might begin in space, such a conflict could easily ignite full-blown war on Earth.