Rooftop solar on the move again in Hawaii, but for how long?

Rooftop solar is moving again in Hawaii, where many homeowners have installed rooftop panels to capitalize on federal and state tax credits for using solar energy. Approvals were stalled by the local utility company that worried the abundant users might threaten the safety and reliability of the power grid. How long will this last? NewsHour special correspondent Mike Taibbi reports. 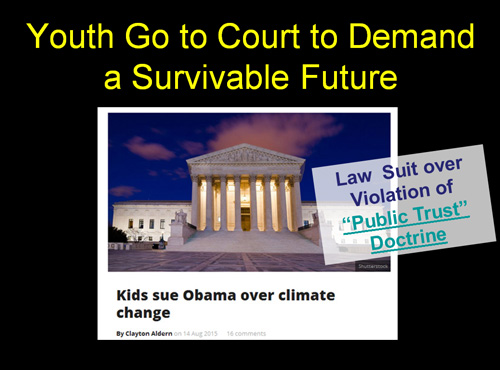 A group of 21 youth have filed a law
suit against President Obama for violation
of the “Public Trust” docTrine.

China served as the main battlefield in the east in the fight against fascism. The Japanese troops were a well-trained modern army. China was not only just at a military disadvantage, but also had to contend with civil wars, social unrest and economic turmoil. But during the eight-year war, China’s resistance tied down nearly three quarters of Japan’s troops.

Violence on Kos as Greece struggles to cope with migrant numbers

Protests turned violent in the intense summer heat as around 50 migrants from Aghanistan, Pakistan and Iran expressed anger that priority for applying for refugee status is being given to Syrians.

Under international law, Syrians have greater rights than economic migrants as their country is in the throes of a civil war.

Since 1974 Cyprus has been divided into two parts – Greek and Turkish. The bloody conflict that preceded it is still fresh in the memory of Cypriots. The ethnic violence that erupted on the island in the sixties resulted in a Greek coup d’état in 1974. This was followed by the deployment of Turkish troops, military conflict, and the division of the island into two mutually resentful parts. Today, Greek and Turkish volunteers are working together to find the bodies of those who went missing 40 years ago. In doing so, they bring peace to the relatives and, hopefully, will initiate the reconciliation of their nations.

September eighteenth, nineteen thirty-one is a day that will never be forgotten by the Chinese people. It marked the beginning of the darkest period in China’s modern history. The Japanese army occupied part of northeastern China since the Sino-Japanese War. But on that day, they bombed a bridge at a Japanese-owned and operated railroad crossing. The Japanese then blamed the attack on Chinese rebels.

This action was used as a pretext for the Japanese army to begin its invasion of China. The incident was also followed by Japan’s full-scale invasion of China and the rest of Asia. The brutal invasion plunged China into an unprecedented disaster. Half of its territory was enveloped in the fire of war. More than 35 million soldiers and civilians were killed. I’m Wang Yizhi with CCTV NEWS. See you next time.

Why Unions Need to Join the Climate Fight – Naomi Klein

Why Unions Need to Join the Climate Fight
By Naomi Klein – September 3rd, 2013
Naomi delivered the following speech on September 1, 2013 at the founding convention of UNIFOR, a new mega union created by the Canadian Autoworkers and the Canadian Energy and Paper Workers Union.

Abridged version for workshops and discussion groups where original 49 min video is too long. See original at http://www.naomiklein.org/articles/20…