In what may prove to be a turning point for political action on climate change, a breathtaking new study casts extreme doubt about the near-term stability of global sea levels.

The study—written by James Hansen, NASA’s former lead climate scientist, and 16 co-authors, many of whom are considered among the top in their fields—concludes that glaciers in Greenland and Antarctica will melt 10 times faster than previous consensus estimates, resulting in sea level rise of at least 10 feet in as little as 50 years. The study, which has not yet been peer-reviewed, brings new importance to a feedback loop in the ocean near Antarctica that results in cooler freshwater from melting glaciers forcing warmer, saltier water underneath the ice sheets, speeding up the melting rate. Hansen, who is known for being alarmist and also right, acknowledges that his study implies change far beyond previous consensus estimates. In a conference call with reporters, he said he hoped the new findings would be “substantially more persuasive than anything previously published.” I certainly find them to be.

To come to their findings, the authors used a mixture of paleoclimate records, computer models, and observations of current rates of sea level rise, but “the real world is moving somewhat faster than the model,” Hansen says.

Hansen’s study does not attempt to predict the precise timing of the feedback loop, only that it is “likely” to occur this century. The implications are mindboggling: In the study’s likely scenario, New York City—and every other coastal city on the planet—may only have a few more decades of habitability left. That dire prediction, in Hansen’s view, requires “emergency cooperation among nations.”

We conclude that continued high emissions will make multi-meter sea level rise practically unavoidable and likely to occur this century. Social disruption and economic consequences of such large sea level rise could be devastating. It is not difficult to imagine that conflicts arising from forced migrations and economic collapse might make the planet ungovernable, threatening the fabric of civilization.

Who Is the Pope? by Eamon Duffy

The Great Reformer: Francis and the Making of a Radical Pope

A Big Heart Open to God: A Conversation with Pope Francis

On December 22, 2014, Pope Francis delivered the traditional papal Christmas speech to the assembled ranks of the Roman Curia. This annual meeting with the staff of the church’s central administration offers popes the opportunity for a stock-taking “state of the union” address. In 2005, his predecessor Pope Benedict XVI had used the occasion to deliver a momentous analysis of the “hermeneutic of discontinuity and rupture” that he believed had distorted understanding of the Second Vatican Council by presenting it as a revolutionary event, and to which he attributed many of the ills of the modern church. The phrase “hermeneutic of rupture” was eagerly seized on by those seeking a “reform of the reform,” and became a weapon in the struggle to roll back some of the most distinctive developments in the church following the Second Vatican Council of 1962–1965, which had been presided over first by John XXIII and then by Paul VI.

The scope of Pope Francis’s 2014 address, however, was far more local and specific. Having briefly thanked his hearers for their hard work during the previous year, the pope launched into an excruciating fifteen-point dissection of the spiritual ailments to which people in their position might be prone. It was a dismaying catalog of “curial diseases”—the spiritual “narcissism” that, as part of the “pathology of power,” encouraged some to behave like “lords and masters” (in Italian, padroni); the “Martha complex” of excessive activity, which squeezes out human sympathy and renders men incapable of “weeping with those who weep”; the “spiritual Alzheimer’s” that besets those “who build walls and routines around themselves” and forget the spirit of the Gospel.

The pope’s tally of curial sins also included cliquishness, acquisitiveness, careerism, competitiveness, and indifference to others; the “existential schizophrenia” and “progressive spiritual emptiness” of many who abandon pastoral service and “restrict themselves to bureaucratic matters”; the “theatrical severity and sterile pessimism,” the “funereal face” that often attend the exercise of power; and the “terrorism of gossip” by which the cowardly “are ready to slander, defame and discredit others, even in newspapers and magazines.”

Former NASA scientist James Hansen, who was one of the first to raise concerns about climate change in the 1980s, has warned that sea levels could rise as much as 10 feet before the end of the century unless greenhouse gas emissions are drastically reduced. The rise would make cities such as London, New York and Shanghai uninhabitable. This comes as new data shows that this past June was the hottest on record, breaking the previous record, which was set last year.

Dozens of mayors and officials representing cities and states from across the world are meeting with Pope Francis in the Vatican today to discuss cities’ commitment to addressing climate change. The meeting comes after Pope Francis wrote an unprecedented encyclical calling for action on climate change. In related news, on Monday a group of Catholic Workers in upstate New York used a seven-foot-tall replica of Pope Francis’ encyclical to erect a highway blockade as part of an ongoing campaign to block a methane gas storage project in caverns underneath Seneca Lake. Thirteen people were arrested.

Half the world’s population lives within 60 km of the ocean.

Limiting climate change to 2°C is not going to protect us from devastating sea level rise, a new report has found.

According to the research, freshwater from land-based ice sheets melting into the oceans is inducing feedback that is accelerating the melting of ice shelves — a loop that indicates sea level rise will continue and could be devastating at much lower temperature changes than previously thought.

The study, authored by well-known climate scientist James Hansen and 16 other researchers, will be published in Atmospheric Chemistry and Physics this week. The research explains that there is an “amplifying feedback” as polar ice melts, because as more freshwater enters the ocean, it traps warmer sea water, which melts more ice. The effect is not included in the current Intergovernmental Panel on Climate Change (IPCC) modeling but “extensive data indicate [it] is already occurring,” according to the report.

“We are underestimating the speed at which these things are beginning to happen,” Hansen, head of the Climate Science, Awareness and Solutions Program at Columbia University’s Earth Institute, said Monday on a call with reporters.

This feedback loop is separate from other accepted science, such as the ice-albedo feedback loop, in which dark-colored water and exposed ground absorb more heat than the white, reflective ice and snow they have replaced.

The implications of this feedback loop are significant, Hansen said.

“This is substantially more persuasive than anything previously published about just how dangerous 2°C will be,” Hansen said on the call Monday.

The study has not been peer-reviewed. Instead, it is being published in a discussion journal, which means will be published in full and made available to the public. Peer review and revisions will be made publicly. The scientific community is sure to weigh in.

Michael Mann, director of the Earth System Science Center at Penn State University, told ThinkProgress that he was “skeptical about some of the specifics” of the paper — for instance, the ocean current modeling and meltwater assumptions. But, overall, Mann supported the discussion the article will prompt.

“Hansen and colleagues make a plausible case that even 2°C planetary warming (something we commit to in just a few years given business as usual fossil fuel burning) could indeed be very bad,” Mann wrote in an email. He pointed to the predicted collapse of the west Antarctic ice sheet and the substantial rise in sea level that would result.

The options for how to spend your free time are almost endless, whether it’s working out at the gym, curling up with a good book, or relaxing in front of the TV. But have you ever considered taking part in scientific research?

With the launch Tuesday of Season Spotter, you’ll have the chance.

The creation of Margaret Kosmala, a postdoctoral fellow, Andrew Richardson, an associate professor of organismic and evolutionary biology, and colleagues at the National Ecological Observatory Network (NEON), Season Spotter is a citizen-science project that aims to recruit Internet users to assist researchers in analyzing images of natural scenes.

“We’re trying to get scientific data out of a set of images that we can’t easily get with a computer,” Kosmala said. “We need to rely on people’s eyes and brains to do the processing for us. We’re asking them to answer simple questions about what they see in these images.”

An unprecedented coalition of the UK’s most eminent scientific, medical and engineering bodies says immediate action must be taken by governments to avert the worst impacts of climate change.

But the joint communiqué, issued by 24 academic and professional institutions, also says that tackling global warming would drive economic progress, benefit the health of millions by cutting air pollution and improve access to energy, water and food. To have a reasonable chance of keeping warming below 2C, the internationally agreed danger limit, the world must end all emissions within the next few decades, the communiqué warns. 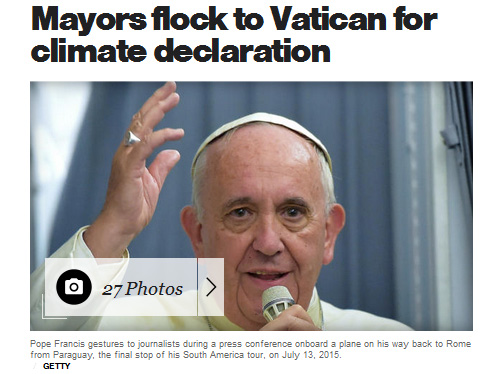 VATICAN CITY — Dozens of environmentally friendly mayors from around the world will be signing off on a Vatican declaration Tuesday calling for their national leaders to approve a “bold climate agreement” that keeps global warming at a safe limit for humanity, The Associated Press has learned.

Some 60 mayors are attending a two-day climate conference at the Vatican featuring an audience with Pope Francis, whose recent environment encyclical is aimed at keeping up pressure on world leaders in the run-up to Paris climate negotiations in December.