This talk was given at a local TEDx event, produced independently of the TED Conferences. David Puttnam looks at Climate Change through different lenses, all of which reveal the unsustainable ways in which we are living. Climate Change is real, but throughout history humans have failed to set political and economic concerns aside for our greater good. Will we ignore this latest warning?

Lord David Puttnam produced award-winning films including Chariots of Fire, Bugsy Malone, and The Mission. He now works at the intersection between education, media, and policy. In 2007 he was appointed Chairman of the Joint Parliamentary Committee on the Draft Climate Change Bill. 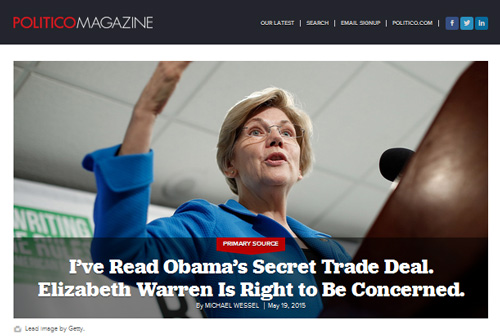 “You need to tell me what’s wrong with this trade agreement, not one that was passed 25 years ago,” a frustrated President Barack Obama recently complained about criticisms of the Trans Pacific Partnership (TPP). He’s right. The public criticisms of the TPP have been vague. That’s by design—anyone who has read the text of the agreement could be jailed for disclosing its contents. I’ve actually read the TPP text provided to the government’s own advisors, and I’ve given the president an earful about how this trade deal will damage this nation. But I can’t share my criticisms with you.

I can tell you that Elizabeth Warren is right about her criticism of the trade deal. We should be very concerned about what’s hidden in this trade deal—and particularly how the Obama administration is keeping information secret even from those of us who are supposed to provide advice.

So-called “cleared advisors” like me are prohibited from sharing publicly the criticisms we’ve lodged about specific proposals and approaches. The government has created a perfect Catch 22: The law prohibits us from talking about the specifics of what we’ve seen, allowing the president to criticize us for not being specific. Instead of simply admitting that he disagrees with me—and with many other cleared advisors—about the merits of the TPP, the president instead pretends that our specific, pointed criticisms don’t exist.

In our NewsHour Shares video of the day, researchers from the University of Washington and Google sifted through 86 million photos posted on public photo sharing websites to create a new kind of time-lapse photography of sites like a Norwegian glacier, a New York skyscraper and Mount St. Helens.

Kern County is the most-fracked county in California by a wide margin. This region also has the worst air quality in the nation, as well as highly elevated rates of cancer and respiratory illness. For the people that live here, fracking means more oil extraction, more crippling climate impacts, and more impacts on their health.

But residents of Kern County are fighting back. They’ve invited California Governor Jerry Brown to come see the impacts of fracking for himself. Join them and sign the petition to Governor Brown here: http://act.350.org/sign/KernCounty/

Madeline Stano of the Center on Race, Poverty & the Environment went by the scene of the oil spill in Santa Barbara. The oil spill happened Tuesday May 19th when a pipe owned by Plains All American Pipeline ruptured — pouring around 105,000 gallons into the Pacific Ocean.

State of emergency in California as oil spill snares wildlife

California Governor Jerry Brown has declared a state of emergency following a pipeline rupture that may have dumped up to 105,000 gallons of oil. Officials believe upwards of 20,000 gallons have leaked into the Pacific Ocean, creating an environmental calamity that is already ensnaring wildlife. RT’s Lindsay France takes a look at the disaster.

How to Stop TPP in the House: Primaries…

Thom Hartmann says the threat of a primary challenge will be enough to force members in the House of Representatives to vote no on Fast Track and the Trans-Pacific Partnership.