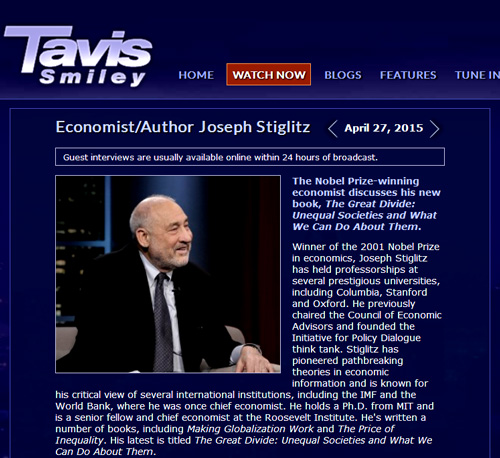 The Nobel Prize-winning economist discusses his new book, The Great Divide: Unequal Societies and What We Can Do About Them.

Winner of the 2001 Nobel Prize in economics, Joseph Stiglitz has held professorships at several prestigious universities, including Columbia, Stanford and Oxford. He previously chaired the Council of Economic Advisors and founded the Initiative for Policy Dialogue think tank. Stiglitz has pioneered pathbreaking theories in economic information and is known for his critical view of several international institutions, including the IMF and the World Bank, where he was once chief economist. He holds a Ph.D. from MIT and is a senior fellow and chief economist at the Roosevelt Institute. He’s written a number of books, including Making Globalization Work and The Price of Inequality. His latest is titled The Great Divide: Unequal Societies and What We Can Do About Them. 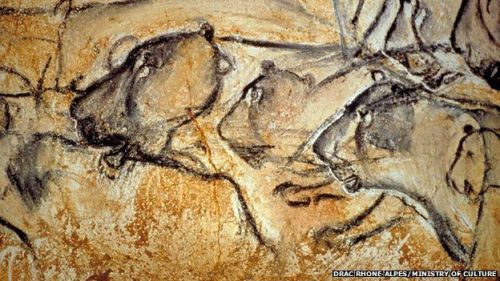 By Rebecca Morelle and Stuart Denman BBC Newsnight, the Chauvet Cave, France
24 April 2015In the Ardeche gorge in southern France lies one of the most important prehistoric sites ever discovered.

It’s locked away behind a thick metal door, hidden halfway up a towering limestone cliff-face.

Few people have ever been allowed inside, but BBC Newsnight has been granted rare access by the French Ministry of Culture and Communication.

We slide through a metal passageway on our backsides, and then tentatively descend a ladder.

It takes a few moments to adjust to the darkness, but our head torches soon reveal that we’ve entered into a vast cave system of geological beauty.

We weave along the narrow metal walkways; stalactites and stalagmites glimmer in the light, sparkling curtains of calcite hang down from above and the floor is awash with the bones of long-dead animals.

Why So Many Americans Feel So Powerless

security guard recently told me he didn’t know how much he’d be earning from week to week because his firm kept changing his schedule and his pay. “They just don’t care,” he said.

A traveler I met in the Dallas Fort-Worth Airport last week said she’d been there eight hours but the airline responsible for her trip wouldn’t help her find another flight leaving that evening. “They don’t give a hoot,” she said.

Someone I met in North Carolina a few weeks ago told me he had stopped voting because elected officials don’t respond to what average people like him think or want. “They don’t listen,” he said.

What connects these dots? As I travel around America, I’m struck by how utterly powerless most people feel.

The companies we work for, the businesses we buy from, and the political system we participate in all seem to have grown less accountable. I hear it over and over: They don’t care; our voices don’t count.

A large part of the reason is we have fewer choices than we used to have. In almost every area of our lives, it’s now take it or leave it.

Companies are treating workers as disposable cogs because most working people have no choice. They need work and must take what they can get.

Earth Day Message from the Pope

“Today we celebrate Earth Day. I exhort everyone to see the world through the eyes of God the creator. The Earth is an environment to be safeguarded, a garden to be cultivated. The relationship of mankind with nature should not be guided by greed, by manipulation and by exploitation, but it must preserve the divine harmony that exists between creatures and creation with the logic of respect and care, so that it can be put to the service of our brothers, and also future generations.”